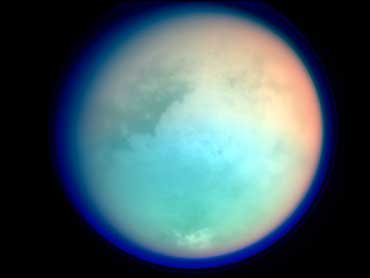 Scientists said the international Cassini spacecraft is providing evidence that Saturn's planet-size moon Titan is geologically alive and has active atmospheric processes that could be moving material, possibly even liquids, on its surface.

Images made from radar beams bounced off Titan during Cassini's close flyby this week revealed such surface details as a big round basin, narrow miles-long linear "streaks," and a cat-shaped region of what could be the moon's theorized lakes of liquid methane and ethane.

Scientists, who had been reluctant to draw conclusions about surface features from pictures taken through Titan's hazy atmosphere, sounded more confident Thursday after radar data arrived late Wednesday and was processed into images that depict terrain in shades of black and white.

"We are seeing much higher resolution here ... and we are seeing detailed features," said Charles Elachi, the Jet Propulsion Lab's director and team leader for Cassini's radar instrument, which imaged a swath of Titan about 75 miles wide and 1,240 miles long.

Elachi said there was "high confidence" in the evidence of geologic activity, noting the long linear features as an example.

"These things would not last very long in geologic time, so if it was a dead planet it's likely that you wouldn't see that kind of feature," he said.

The possible region of lakes was depicted as very dark, which in radar data is a characteristic of a signal bouncing off a very smooth surface like a liquid. The region was named "Si-Si the Cat," after a scientist's little daughter who noticed it resembled a "Halloween cat," Elachi said.

Unlike the airless moons and space rocks that NASA can photograph with startling clarity, Titan, hundreds of millions of miles from Earth, has long stymied scientists because its surface is shrouded by a thick atmosphere of nitrogen and methane that blurs views like big-city smog.

That has forced scientists to create theories about the surface from observations of the hydrocarbon-laced atmosphere. Scientists believe seas or lakes of methane could form as organic — or carbon-based — compounds fall out of the atmosphere and collect on the surface.

Cassini, which reached Saturn this summer on a $3.3 billion mission to study the planet's system for four years, also used its radar receiver to listen to Titan's natural microwave whisper to reveal its composition.

"The picture that is emerging is that Titan is really covered in organics," said Ralph Lorenz, a radar team member from the University of Arizona.

Imaging team member Alfred McEwen, also of the University of Arizona, presented new information from optical pictures taken during Cassini's dash past Titan showing streaks — possibly haze layers or waves — in the atmosphere over the north polar region and east-to-west streaks on the surface.

The surface streaks are believed to be from movement of material, and given their consistency over a large scale, wind is believed to be the primary cause, McEwen said.

"What Cassini has shown us this week ... Titan is an extremely dynamic and active place, not simply in its atmosphere but on its surface as well," said Jonathan Lunine, an interdisciplinary scientist.

Radar suggested some surfaces resembled those created by volcanic flows, although on Titan they would not be molten rock because density data from the Voyager spacecraft's flyby 24 years ago showed the moon has water ice in its interior, he said.

Rather, he speculated, the flows could be melted ice mixed with components like ammonia.

The linear features suggest a different geology and could be fractures that have eroded, or ridges perhaps formed by compression, he said, adding they might even indicate a thin surface layer involving liquid and solid hydrocarbons in a sort of "egg shell" that is cracking in different directions.

"The surface, at least, is a like a jigsaw puzzle for which the picture is not provided on the box top," he said. "We don't know what the final picture is going to look like."