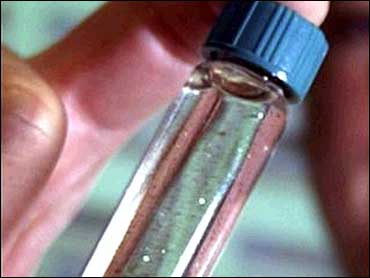 Grains the size of dust that can sense their environment, orient themselves and assemble in groups have been developed by a team of California chemists who want to build miniature robots.

The particles can identify and surround drops of oil or other pollutants in water, according to the researchers at the University of California, San Diego.

And they hope the research could be a first step to developing minute robots for use in medicine, pollution monitoring, law enforcement and even bioterrorism surveillance.

The battlefield applications of the new technology has caught the interest of the Pentagon, which is the financial backer of the research, through its Defense Advanced Research Projects Agency (DARPA).

"This is a key development in what we hope will one day make possible the development of robots the size of a grain of sand," said Michael Sailor, the leader of the research team.

"The vision is to build miniature devices that can move with ease through a tiny environment, such as a vein or an artery," he said.

"Such devices could be used to monitor the purity of drinking or sea water, to detect hazardous chemical or biological agents in the air or even to locate and destroy tumor cells in the body," said Sailor, a professor of chemistry and biochemistry.

The findings are reported in this week's online issue of Proceedings of the National Academy of Science.

The research team designed tiny flat silicon discs with one side chemically treated to attract water and the other side treated to be water repellant.

Each side is a mirror surface that has been etched so that when water or other chemicals infuse the etched areas there is a slight color change.

The chips are then broken into pieces the size of the diameter of a human hair.

That also causes a slight color change in the grains, signaling the presence of the oil droplets.