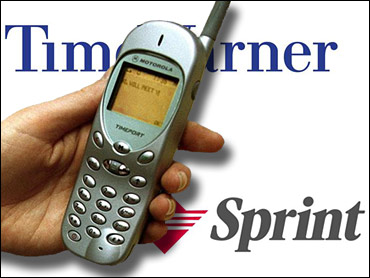 Sprint Corp. and Time Warner Cable are discussing a deal that would allow the cable provider to offer cell phone service, the companies said Wednesday.

Such a deal would make the unit of Time Warner Inc. the only major cable company to offer the so-called "quadruple play" television, high-speed Internet access and both wired and wireless phone service.

While representatives of both companies confirmed that talks are underway, they wouldn't say if a deal was imminent, as was reported Wednesday by The Wall Street Journal. The paper said the new service would be limited to Kansas City market and become available in the first quarter of 2005.

Since then, Sprint has announced a number of similar deals with other cable companies, such as Mediacom Communications Inc. and USA Companies.

Sprint spokesman Jeff Shafer said the Overland Park, Kan.-based company is in talks with all of its cable partners to eventually resell Sprint wireless service as part of a package deals to subscribers.

"Our relationship with the cable companies is as much about offering the quadruple play as it is offering (Internet phone service)," Shafer said. "This is all about offering a compelling bundle to the consumer."

Cable companies are in a bitter fight with traditional phone carriers, such as SBC Communications Inc., BellSouth Corp. and Verizon Communications Inc., as both are trying to offer the full range of television programming, high-speed Internet, standard voice services and wireless.

The strategy is based on the assumption a customer receiving a wide range of services from a single company is less likely to jump ship to another provider.

A consortium of cable companies, including Time Warner, are studying how to break into the wireless business, either by building their own network, buying up a wireless provider or teaming up with a company like Sprint to resell the service.

Sprint is the nation's third-largest cellular provider with about 23 million subscribers. Earlier this month, Sprint and Nextel Communications Inc. said they will combine in a $35 billion deal that would create a company with 38 million wireless subscribers.