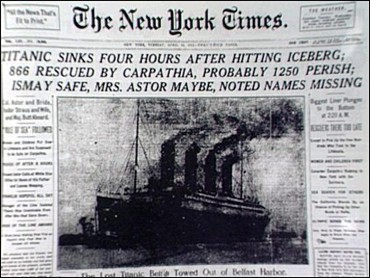 When Robert Ballard discovered the Titanic on the North Atlantic seabed in 1985, he was amazed at how well-preserved it was and predicted the wreck would change little in his lifetime.

But scientists and other experts now say that the wreckage — almost covered with corrosive microbes after seven decades under the salty water — is decaying so fast that the 100-foot forward mast has collapsed nearly a decade earlier than previously predicted.

And the crow's nest from which a lookout shouted, "Iceberg, right ahead!" has disappeared.

Atlanta-based RMS Titanic Inc. has sole salvage rights to the ship, but the company says it has no plans to retrieve additional artifacts.

The outer wall of the captain's cabin has fallen away, leaving fixtures like a bathtub to open view. The poop deck, where passengers crowded as the ship sank, has folded under itself. Parts of the stern are falling apart and the ship's bow has yawning holes in it.

"I was really quite shocked," said Alfred S. McLaren, an oceanographer and former nuclear submarine captain, who went on a dive there in 1999 and again this past July. "It just is deteriorating so much more rapidly than I expected it would."

The culprit, experts say, are clusters of rusticles — iron-eating microbial bits of rust shaped like icicles — that have spread, possibly fueled by a drop in fish in the area that would otherwise gobble up marine life that encourages the rusticles to grow.

Others blame increased human activity. Since its discovery, the Titanic has been a big draw among divers, scientists and tourists.

Artificial flowers and about a dozen plaques have been left on the decks. Strewn around the area were plastic sampling bags, a small handheld fishing net, lead weights and even beer and soda bottles, said Capt. Craig McLean, ocean exploration director at the National Oceanic and Atmospheric Administration, who led a dive in June.

The wreck was found 73 years later, 380 miles off Newfoundland in two pieces — its bow half a mile away from the stern.

In 1986, Congress directed the federal government to enter talks with Canada, Britain and France regarding the Titanic's fate. The countries have yet to decide on a final agreement, leaving the site almost entirely unregulated, except for a provision giving sole salvage rights to RMS Titanic Inc.

Since then, the company has removed about 6,000 artifacts from the site, including an 18-ton slab of the hull. These have attracted more than 13 million people to exhibits held around the world, from Los Angeles to Paris, CEO and president Arnie Geller said.

Debate continues to rage on whether to leave the ship alone or salvage everything possible.

In 1996, D. Roy Cullimore, a Canadian microbiologist who has done three dives to the site, found that bacteria in the rusticles were consuming 200 pounds of iron from the ship each day. Two years later, Cullimore returned to find that the microbes were removing 600 pounds of iron a day.

In 2001, NOAA recognized that the wreck was fast disintegrating and estimated "the hull and structure of the ship may collapse to the ocean floor within the next 50 years, perhaps sooner."

The agency, in consultation with Britain, Canada and France, issued guidelines for the research, exploration and salvage of the wreck.

In June, McLean's NOAA team returned to the wreck site and took photographs to compare them to Ballard's 1985 pictures, hoping to accurately document the ship's condition.

Human activity, including tourism and expeditions, needs to be limited, said Ed Kamuda, the president of the Titanic Historical Society in Springfield. For $36,000, anyone can visit the site in mini submarines, known as submersibles.

"Every time they go down there, they do damage. The propellers whirl up the sediment and the rusticles," Kamuda said. "If they would just leave it alone, it would last a lot longer."

Scientists say there's no evidence that visitors are speeding up decay, but admit that materials left by visitors can be an eyesore.

Although studying the Titanic's decomposition patterns can help scientists predict the fate of other historical shipwrecks, some preservationists say the site should be a simple maritime memorial and left alone.

"Let nature take back what is hers," he said. "It's only a matter of time before it's a brown stain and a collection of pig iron on the ocean floor."