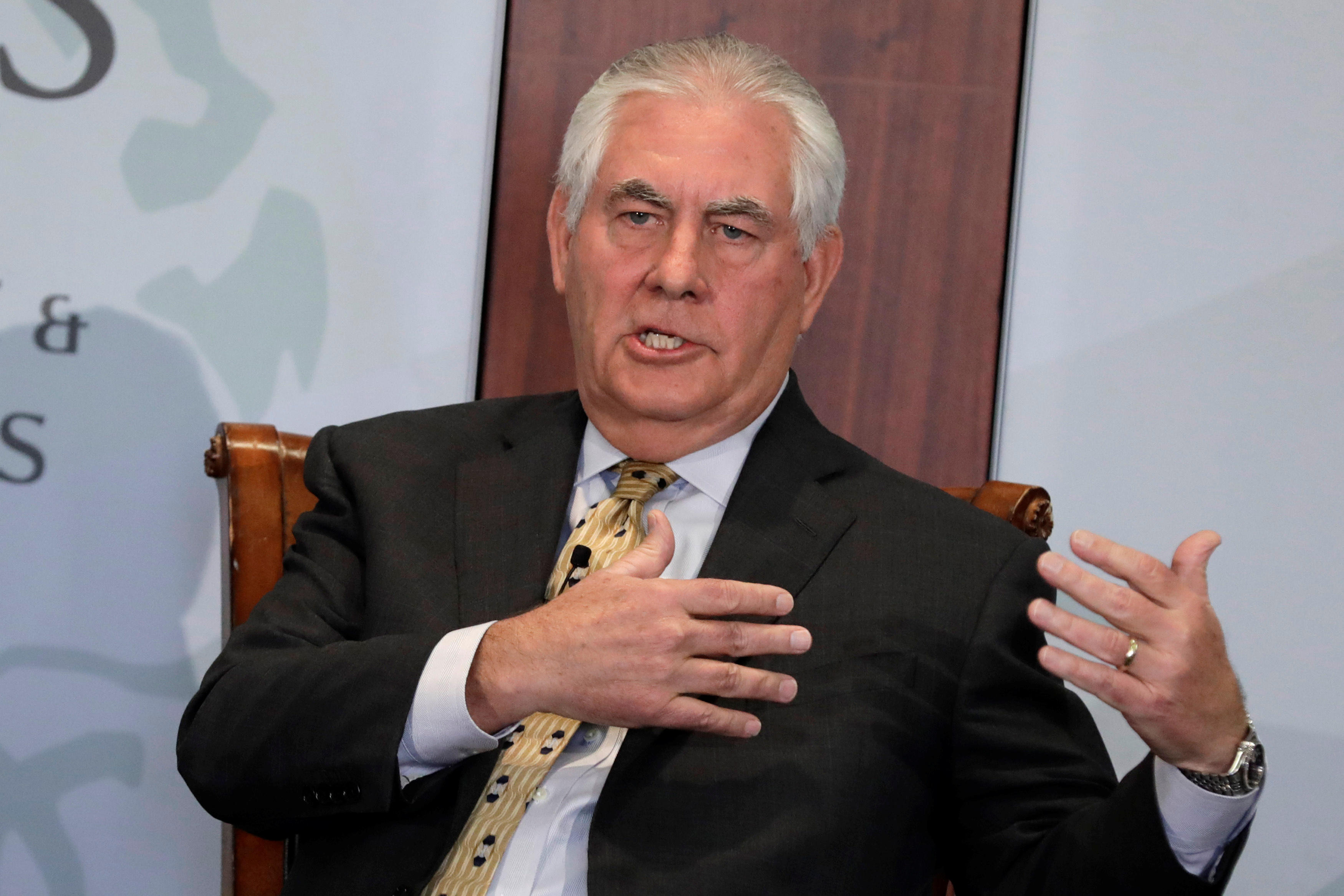 Myanmar's military leadership should be held accountable for the atrocities being carried out against Myanmar's Rohingya Muslims, Secretary of State Rex Tillerson said Wednesday.

But he did not commit the U.S. to action against the Myanmar military and indicated that it is still unclear exactly who is to blame. He said that news reports coming out of the region "tear your heart out."

"If these reports are true, someone is going to be held to account for that," Tillerson said during a speech at the Center for Strategic and International Studies Wednesday. He said the U.S. is "extraordinarily concerned" about the situation, which he called a gross abuse of the human rights.

The United Nations estimates that more than 500,000 Rohingya have fled the country since the crackdown began in August, after an insurgent Rohingya group attacked security outposts in Rakhine. Myanmar has denied responsibility but has also not allowed any organizations into the Rakhine state to investigate. Satellite images have shown Rohingya villages burning. The military claims that the Rohingya are burning their own homes. The accounts of the killings are graphic, and the U.N. has called the violence "textbook ethnic cleansing."

Tillerson said the U.S. remains involved in identifying the source of the violence. The U.S. has given advice to the Burmese military on how to chart a path forward.

"What's most important to us is that the world can't just stand idly by and be witness to the atrocities that are being reported in the area," Tillerson said. "What we've encouraged the military to do is, first, we understand you have serious rebel, terrorist elements within that part of your country as well that you have to deal with, but you must be disciplined about how you deal with those, and you must be restrained in how you deal with those."

The U.S. has been in direct contact with the military faction of the Myanmar government, formerly known as Burma. The U.S. ambassador to Myanmar, Scot Marciel, has met with the Commander in Chief of the Myanmar Armed Forces to discuss the situation. Marciel reiterated U.S. concerns and the need to protect all communities, including the Rohyigya, according to a State Department official. Maricel also pressed the military to support the civilian government in aiding thousands who have been driven from their homes.

"She urged the Burmese government to hold all those found responsible for offenses against members of all affected communities, including military officials, to be held accountable for their actions," said a State Department official.

Burma's power-sharing government gives both the civilian and military sides control over the government, which is why engagement with both sides is necessary. The U.S. is trying to maintain relations with the country and encourage them towards positive governance -- but the new birth of this power-sharing agreement means the situation is delicate.

"Nobody wants to see a return of the generals," Tillerson explained in September, in reference to the military government that once controlled the country. But he said it is vital for Aung San Suu Kyi, the country's civilian leader, "to make clear that this is an abomination and that those people will be allowed back, that those people will be allowed back to Burma and that preparation is being made, and that the abuse of their human rights and the killings -- hundreds perhaps even thousands -- then the killings will stop."

In September, Tillerson called Suu Kyi to commend her commitment to ending the violence. This call came after the day after she condemned the violence for the first time. Suu Kyi, a Nobel Peace Prize winner, had not said anything for the first month of this atrocity. Her silence was met with repeated calls for her to speak out from leaders around the world.

In their conversation, Tillerson "urged the Burmese government and military to facilitate humanitarian aid for displaced people in the affected areas, and to address deeply troubling allegations of human rights abuses and violations," said Heather Nauert, the State Department spokesperson.

Almost a month later, Tillerson is repeating his call for Myanmar to allow access to the region and swift aid for the displaced. At this point a handful of the U.S. embassy personnel there have gained access to the area to collect a "firsthand account of what is occurring."

Earlier this year the U.S. committed $32 million in humanitarian assistance to address the crisis. The majority of that aid went to Bangladesh, where most of the Rohingya refugees have fled.

In 2011, then-Secretary of State Hillary Clinton visited the country and declared that the U.S. would no longer prevent the IMF and World Bank from assisting the country. U.S.-Myanmar relations grew warmer throughout the Obama administration. In 2016, the U.S. lifted sanctions on the country. As the crisis grows, there are looming questions about the lens through which the U.S. initially viewed country's future.

"I wouldn't characterize us as being ever too optimistic," Simon Henshaw, the acting assistant secretary in State Department's Bureau of Refugees, populations and migration, told reporters last month. "I think we always knew that this would be a very difficult road to follow, and it has proven to be so. We certainly continue to support democracy in Burma and will continue to work in that direction."