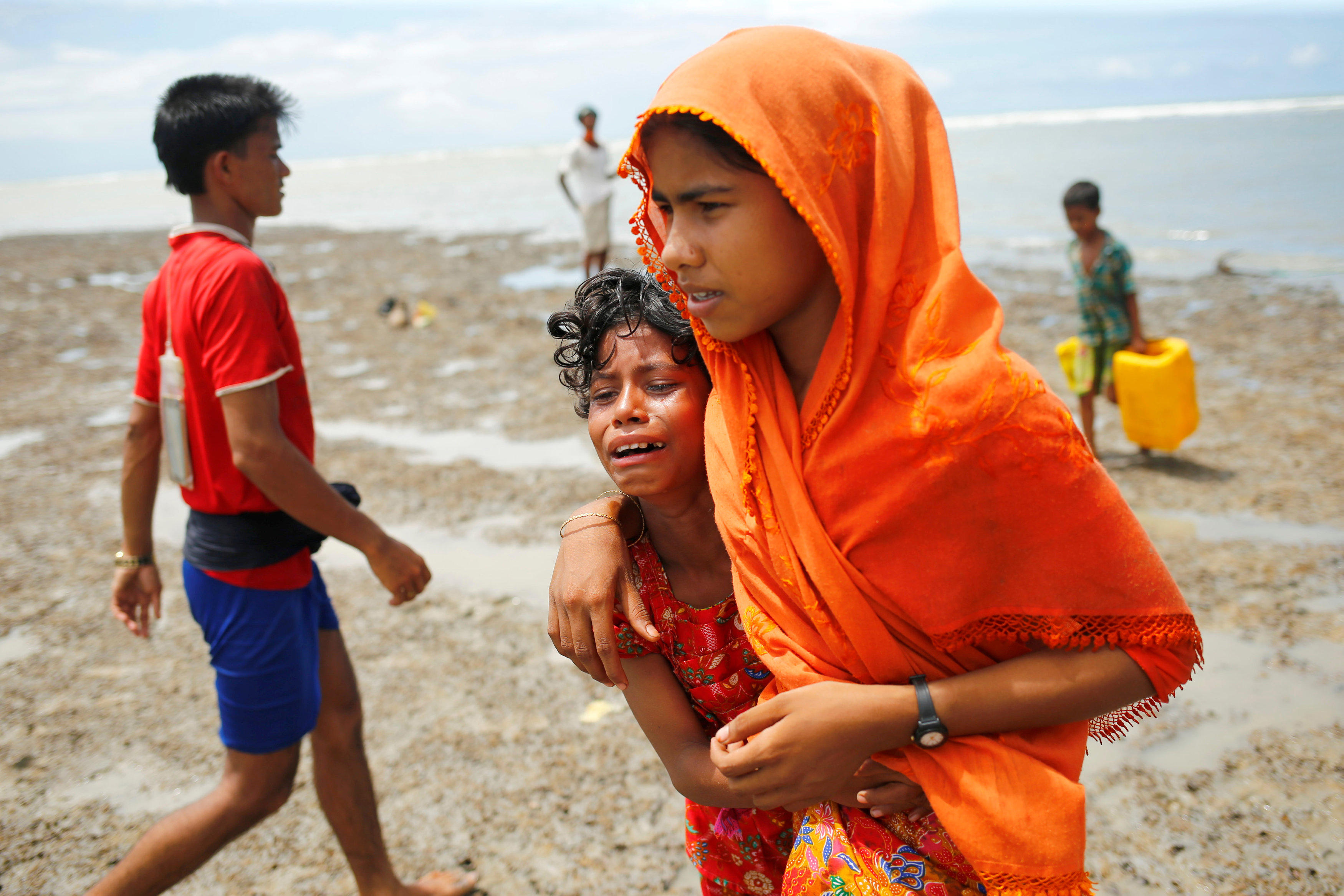 LONDON -- Secretary of State Rex Tillerson has delivered the toughest condemnation yet from a Trump administration official of the persecution of Myanmar's Rohingya Muslims, likening the violence against them to ethnic cleansing and demanding it stop.

On Thursday, Tillerson directed the blame toward Myanmar's powerful military, which is responsible for security operations that have seen nearly 400,000 people flee to neighboring Bangladesh in the past three weeks after Rohingya insurgents launched coordinated attacks on government forces. He reiterated support for civilian leader Aung San Suu Kyi who is facing growing pressure to speak out over the military's conduct.

Tillerson said the U.S. appreciated the "difficult and complex situation" Suu Kyi finds herself in, sharing political power with the military, but he also described the "horrors" occurring in the Southeast Asian nation as a "defining moment" for its new democracy.

"This violence must stop, this persecution must stop. It has been characterized by many as ethnic cleansing. That must stop," Tillerson told a news conference in London after talks with Britain and France. "We need to support Aung San Suu Kyi and her leadership but also be very clear to the military that are power-sharing in that government that this is unacceptable."

British Foreign Secretary Boris Johnson was more strident in criticizing Suu Kyi. He said the suffering of the Rohingya people was an "abomination," and that Suu Kyi must use her authority to halt the violence against them.

Johnson said he admired Suu Kyi's fight against Myanmar's former military junta -- she spent about 15 years under house arrest - but "it is now vital for her to use that moral capital, that moral authority to make the point about the suffering" of the Rohingya. He said the Nobel laureate needs to "make clear that this is an abomination and that those people will be allowed back" to their homes.

Britain was the former colonial ruler of the country also known as Burma. It came under military rule little more than a decade after independence in 1948. The United States under President Obama was instrumental in coaxing the generals give up direct rule five decades later and allow a civilian government. Following 2015 elections won by her party, Suu Kyi became its de facto leader.

But the transition has been blighted by the tensions between majority Buddhists and the Rohingya, who are widely loathed in Myanmar and regarded as illegal immigrants from Bangladesh, although many have lived in Myanmar for generations.

In the past few years there have been periodic explosions of violence, culminating in the current crackdown by security forces that began Aug. 25 and which top U.N. officials have also described as ethnic cleansing.

On Thursday, Amnesty International said it had turned up evidence of an "orchestrated campaign of systematic burnings" by Myanmar security forces. Based on its analysis of video, satellite photos, witness accounts and other data, the human rights group said more than 80 inhabited sites, each at least 1,230 feet in length, have been torched in strife-hit Rakhine State.

"The evidence is irrefutable - the Myanmar security forces are setting northern Rakhine State ablaze in a targeted campaign to push the Rohingya people out of Myanmar," said Tirana Hassan, Amnesty's crisis response director said in a statement.

"Security forces surround a village, shoot people fleeing in panic and then torch houses to the ground," she said. "In legal terms, these are crimes against humanity."

While the Trump administration has been less active on Myanmar than the Obama administration, the current wave of global condemnation has begun to galvanize a response in Washington, where Suu Kyi has long been idolized for her peaceful struggle for democracy.

Senior Republican Sen. John McCain this week canned legislative plans to authorize deeper military ties between the U.S. and Myanmar. He noted that the international community has called upon Suu Kyi to stop the violence and hold human rights abusers accountable, "but there has been no action to-date."

On Thursday, the Senate's top Republican, Mitch McConnell, who has long been at the forefront of U.S. policy toward Myanmar, came to Suu Kyi's defense. McConnell said he spoke with Suu Kyi by phone on Wednesday and she repeated her call for "peace and reconciliation" in strife-torn Rakhine state. She told him she was working toward securing immediate and improved humanitarian access to the region.

The Kentucky lawmaker said her civilian government has little control over Myanmar's military and the nation's path to a more democratic government will take time.

"Publicly condemning Aung San Suu Kyi - the best hope for democratic reform in Burma - is not constructive," McConnell told the Senate. "Attacking the single political leader who has worked to further democracy within Burma is likely to hinder that objective in the long run."