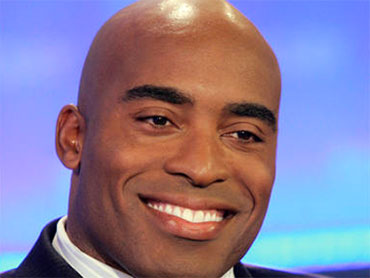 There must be something in the lockout Gatorade because NFL running backs just keep saying the darndest things.

Adrian Peterson? He compared the league to "modern-day slavery."

But now, courtesy of Tiki Barber, comes perhaps the mother of all bizarre analogies.

Barber, who's attempting a football comeback at age 36 after retiring in 2007 to pursue a TV career, has managed to somehow compare himself to Holocaust victim Anne Frank.

How did he manage this convoluted comparison?

In an interview with Sports Illustrated's L. Jon Wertheim, Barber recounted his very public split from his wife Ginny in 2009 and his subsequent relationship with young NBC intern Traci Johnson. As you may recall, the Big Apple media had a field day with Barber's transgressions. A New York Post headline on April 7, 2010: "Tiki Barber dumps pregnant wife for hot blonde."

Barber said the media scrutiny forced him and Johnson into hiding - into the attic of the New Jersey house of his agent, Mark Lepselter.

"Lep's Jewish," Barber said, "and it was like a reverse Anne Frank thing."

In the article, Wertheim immediately interjects a parenthetical, which perfectly assesses Barber's ill-advised analogy: "He has the wit and smarts to make an Anne Frank allusion and the artlessness to liken himself--an adulterer trying to elude gossip columnists--to a Holocaust victim."

Artless, indeed. Barber was clearly trying to be funny, but it didn't take long for his sense of humor to ignite strong criticism from the evil entity he was supposedly hiding from - the New York tabloids.