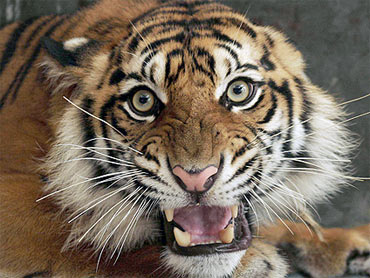 The world's tiger population is declining fast despite efforts to save them, and new strategies are urgently needed to keep the species from dying out, international wildlife experts said Tuesday.

"We are assembled here to save tigers that are at the verge of extinction," Nepal's secretary of forest and soil conservation, Yuvaraj Bhusal, told a conference of tiger experts from 20 countries, including the 13 where wild tigers are still found.

An estimated 3,500 to 4,000 tigers now roam the world's forests, down from the more than 100,000 estimated at the beginning of the 20th century. All the remaining tigers are in Asia.

Participants at the conference, which also includes the World Bank, the World Wildlife Fund and other groups, plan to discuss strategies for tiger conservation, as well as challenges such as poaching, the trade of tiger parts and conflicts between tigers and local populations.

In a recent case, a Sumatran tiger died after being caught in a pig snare last week in Indonesia, the country's news agency, Antara, reported Monday. The report said the tiger died as it was being prepared for surgery Monday. Only about 250 Sumatran tigers remain in the wild.

"Despite our efforts in the last three decades, tigers still face threats of survival. The primary threat is from poaching and habitat loss," Nepal's prime minister Madhav Kumar Nepal told the conference.

"Global and regional solidarity and corrective measures are more necessary now than ever to face these challenges," the prime minister said.

The conference continues through Friday.