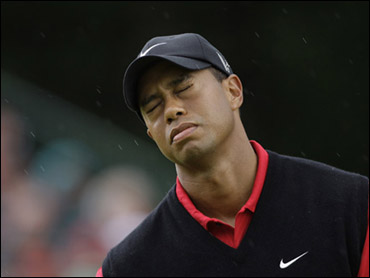 Tiger Woods will be issued a careless driving citation for a car crash outside his Orlando-area mansion last week, but will not face criminal charges, the Florida Highway Patrol said Tuesday.

Woods faces a $164 fine and four points against his driver's license, not close to enough to have it suspended. The citation closes the investigation of last week's crash.

The patrol "is not pursuing criminal charges in this matter nor is there any testimony or other evidence to support any additional charges of any kind other than the charge of careless driving," Sgt. Kim Montes said.

"Despite the celebrity status of Mr. Woods, the Florida Highway Patrol has completed its investigation in the same professional manner it strives to complete each traffic investigation," Sgt. Kim Montes said.

According to a accident report, Woods crashed his SUV into a fire hydrant and a tree at 2:25 a.m. Friday. The airbags did not deploy and Elin Nordegren, Woods' wife, told Windermere police she used a golf club to smash the back windows to help him out.

Since the accident, tabloids and gossip Web sites have fueled speculation about the events leading up to it, including that there may have been a domestic dispute between Woods and his wife.

After all of the speculation about the focus of the investigation of Woods' accident - and the source of his injuries - authorities handed out a moving violation and declared the case closed.

The Highway Patrol wrapped up several loose ends, acknowledging that they dropped an attempt to obtain woods' medical records because of insufficient evidence, but refusing to say why they wanted the records, reports CBS News correspondent Randall Pinkston.

The attorney of the family that called 9-1-1 to help Woods also spoke out today. Attorney Bill Sharpe suggested that speculation about Woods' injuries is misplaced: "None of his injuries look like he was beat up by his wife."

Today, state police concurred. "There are no claims of domestic violence by any individual," Montes said.

Woods' attorney was equally blunt. :"Tiger Woods is pleased with the outcome," he said in a written statement. "Other than that, I have no comment. It is over for us."

The crash occurred shortly after the National Enquirer ran a story that Woods was seen with another woman, Pinkston reports.

The woman, Rachel Uchitel, denied having an affair with Woods when contacted by The Associated Press.

On Tuesday, however, reports of an affair with a surfaced. TMZ.com reports that Jaimee Grubbs will claim in an US Weekly story due out Wednesday that she carried on a 31-month-long affair with Woods after they met in April 2007.

Grubbs, who was a 21-year-old cocktail waitress when the alleged relationship began, claims in the magazine story to have had 20 sexual encounters with Woods and says she still has more than 300 text messages from the athlete.

An attorney for the neighbors who dialed 911 after the crash said Woods did not appear to be driving under the influence and showed . Montes said there were no claims of domestic violence and insufficient evidence to subpoena any medical information.

"Despite the celebrity status of Mr. Woods, the Florida Highway Patrol has completed its investigation in the same professional manner it strives to complete each traffic investigation," Montes said.

Woods' injuries were "consistent with a car wreck and inconsistent with him being beat up," said Bill Sharpe, the attorney for the neighbors. "The scratches on his face were consistent with someone who maybe was in a minor car accident and hit his head on the windshield. ... None of his injuries looked like he was beat up by his wife."

In its initial accident report, the Florida Highway Patrol said alcohol was not involved.

Sharpe said neighbor Linda Adams and her two adult sons went outside their home in the exclusive gated community of Isleworth after hearing the crash and Nordegren asked them to call the 911 emergency number.

He said the neighbors found Nordegren kneeling beside her husband, upset about his injuries. Sharpe said Woods appeared woozy and had scratches on his face and that his wife was trying to console him. The Adamses wrapped Woods in a blanket and made sure he didn't move.

Woods from his own golf tournament, citing injuries from the crash.

By skipping his tournament, Woods will escape the TV cameras and a horde of media seeking more details. The tournament was to be the last of the year for Woods anyway, and he did not say when or where he would make his return next year.

Woods released a statement Sunday on his Web site saying the accident was his fault, but he did not address any of the questions still swirling around it. He asked that it remain "a private matter," but with the media in full pursuit, Woods may not get his way.

Woods even faced questions from fans leaving comments on his site. Most voiced support for the golfer, but some said he should address the questions about his own actions and those of his Nordegren before and after the accident.

What is driving intense media focus is Woods' refusal to speak to the Florida Highway Patrol about the circumstances of the crash, reports Pinkston. He turned them away from his home three times, though Woods' attorney did provide the police with Woods' drivers license, registration, and proof of insurance, as required by law.

"By talking to the police, by giving a press conference, by going to his golf tournament, this could only end up in disaster," Black said. "What is he going to tell the police, that he was having a fight with his wife and have his wife arrested? That would be a disaster to do anything like that.

Junior Seau had brain disease at time of suicide

Boxing gym knew champ before he was Muhammad Ali
Thanks for reading CBS NEWS.
Create your free account or log in
for more features.
View CBS News In
CBS News App Open
Chrome Safari Continue
Be the first to know
Get browser notifications for breaking news, live events, and exclusive reporting.