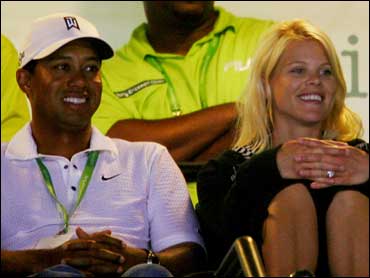 Celebrity golfer Tiger Woods should continue his silent approach to the media about his car crash last week, according to Florida criminal defense attorney Roy Black.

Black said on "The Early Show" that "By talking to the police, by giving a press conference, by going to his golf tournament, this could only end up in disaster. What is he going to tell the police, that he was having a fight with his wife and have his wife arrested? That would be a disaster to do anything like that.

Woods, Pinkston said, is blaming injuries from last week's car wreck as the reason for pulling out of the Chevron World Challenge Golf Tournament. Woods has hosted the tournament for nine years.

Pinkston reported Woods continues to insist the accident is a private matter. However, rumors fester that domestic discord - a tabloid reported of an affair with a New York club manager - drove Woods from his home, barefoot, at 2:30 a.m.

Pinkston added that questions linger about the accident: Why did Woods' wife, Elin, use a golf club to break the windows of the vehicle to pull him out? Were Woods' injuries caused by the wreck?

Some answers, Pinkston said, could come from the hospital that treated him after the accident.

However, a hospital spokesman told CBS News he would "neither confirm nor deny" reports that the Florida Highway Patrol is seeking Tiger's medical records from the crash.

On Sunday, Woods complied with Florida law, submitting his driver's license, registration and insurance card to officers. But for a third time, Woods did not answer any questions.

If Tiger Woods does not speak, Moses said, the investigation should close, "Unless there's other evidence that is not being reported yet, and that we don't know about."

However, if police would want to investigate Woods' wife further, could the State of Florida obtain access to Tiger's medical records?

Black said on "The Early Show" that isn't likely to happen.

"A subpoena (would have to be issued) that Tiger Woods could object to that and have a hearing in court and there are no facts to back it up," he said. "Secondly, with a search warrant, but they need probable cause. They need evidence a crime was committed. There's no such evidence here outside these tabloid reports."

As for the police, Black said, they need facts to present to a judge and a prosecutor.

"All the rumors in the world do not make a case without a single fact," he said. "He's not talking. She's not talking. There are no eyewitnesses. All they know of is his car hit a fire hydrant and a tree."

As for the continued silence from the golf star, Black said his approach could pay off.

"If he keeps the same strategy, he doesn't talk to the police, keeps quiet, stays at home, she doesn't say anything, I think sooner or later, it will blow over, no matter how much pressure is put on this."