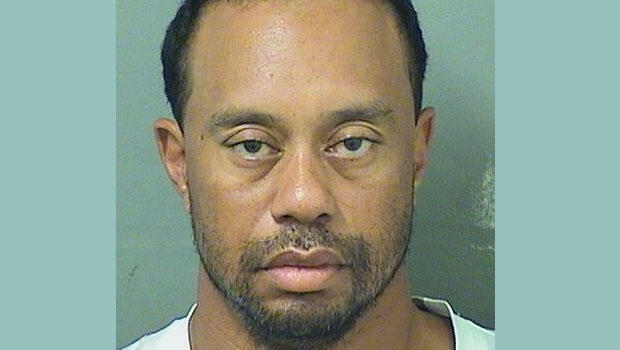 JUPITER, Fla. -- Golfing great Tiger Woods is out of jail after being arrested on suspicion of driving under the influence, according to online booking records.

A spokeswoman for Jupiter Police tells CBS affiliate WPEC an officer pulled him over around 3 a.m. on Military Trail in Jupiter, Fla.

Jupiter Police spokeswoman Kristin Rightler said she did not have additional details about the circumstances leading to Woods' arrest, nor did she have any information about whether the arrest involved drugs or alcohol. She said an arrest report may be available Tuesday.

Woods, the 14-time major champion who ranks second with his 79 career victories on the PGA Tour, has not played for four months and has played in just one event in 2017, according to CBS Sports. He is out for the rest of the season while he recovers from his fourth back surgery.

The world's former number one golfer pulled out of The Masters earlier this year. His agent at Excel Sports, Mark Steinberg, did not immediately respond to a voicemail from the Associated Press. PGA Tour spokesman Ty Votaw said the tour would have no comment.

In an update on his website last Wednesday, before his arrest, Woods said he hasn't "felt this good in years" after the April fusion surgery. He said he wants to get back on the PGA tour.

The surgery meant missing all the majors for the second straight year. It was his fourth dating back to spring of 2014.

Woods had a second back surgery in September 2014, and a third one in November 2014, and then sat out for 15 months until returning last December at his Hero World Challenge in the Bahamas, where he made 24 birdies but tied for 15th in an 18-man field. He missed the cut at Torrey Pines in late January, and then flew to Dubai and withdrew after opening with a 77.

That was his last round.

"I could no longer live with the pain I had," Woods wrote. "We tried every possible non-surgical route and nothing worked. I had good days and bad days, but the pain was usually there, and I couldn't do much. Even lying down hurt. I had nerve pain with anything I did and was at the end of my rope."

Woods said he was encouraged that Davis Love III, Retief Goosen, Lee Trevino, Lanny Wadkins and Dudley Hart are among those who have had fusions or disc replacements and all returned to play.

Woods said he is not contemplating when he might play again. He said he can't twist for three more months and he is concentrating only on short-term goal.

"There's no hurry," Woods said. "But, I want to say unequivocally, I want to play professional golf again."

The arrest Monday was the first time Woods has run into trouble off the golf course since he plowed his SUV into a tree and a fire hydrant outside his Windermere, Florida, home in the early morning after Thanksgiving in 2009, which led to revelations that he had multiple extramarital affairs.

A witness, who wasn't identified in the report, told the trooper he had been drinking alcohol earlier. The same witness also said Woods had been prescribed two drugs, the sleep aid Ambien and the painkiller Vicodin. The report did not say who the witness was but added it was the same person who pulled Woods from the vehicle after the accident. Woods' wife has told police that she used a golf club to smash the back windows of the Cadillac Escalade to help her husband out.

Woods and wife Elin Nordegren divorced in August 2010. He later had a relationship with Olympic ski champion Lindsey Vonn from 2013 that lasted two years.