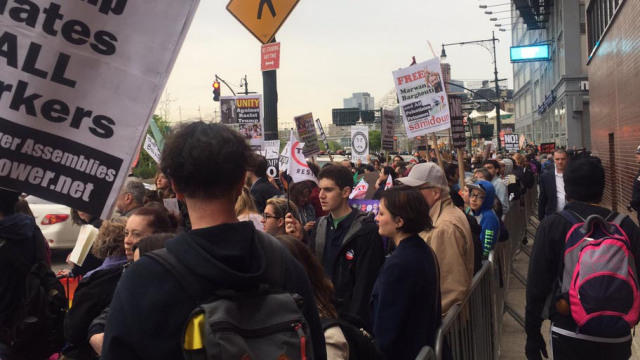 NEW YORK -- Well over a thousand protesters were kept across the street from the Intrepid in barricades as throngs of police stood by to keep order on Thursday evening.

They were there to greet President Trump, reports CBS New York, as he headed to a meeting with Australian Prime Minister Malcolm Turnbull at an event at the USS Intrepid.

The crowd booed and chanted "New York hates you!" over drums and tambourines.

Some Trump supporters were also on hand to cheer him on.

New York was the scene of several huge demonstrations against Trump in the early days of the Republican's presidency. Thursday's rally was a much smaller affair.

"We want him to know the resistance remains, even in his hometown," said Ruthie Adler, 30, a Manhattan waitress.

Barbara Good, 58, of Manhattan, said she has been a veteran of street demonstrations since the Vietnam War.

"Even if it doesn't change anything, it's still a force for good," she said.

Some demonstrators yelled "shame!" at people dressed in tuxedos and gowns who appeared to be headed to the dinner, which was being held to commemorate the 75th anniversary of the Battle of the Coral Sea, a World War II naval battle.

Pam Compost-Palma, the daughter of a first generation immigrants and Iraq war veteran, attended the protest.

"The man in our White House does not know service," she told WCBS-AM. "He does not serve us. He is a threat to our values, our freedom, and our community."

A small group of Trump supporters also gathered along the roadway, holding signs that said, "Thank God for Trump" and "Deport illegal aliens."

"We've got his back," said Grace Vasquez, a New York City native.

"New York City is the epitome of what is good about this world, people of all faiths, all ethnicities, all races, genders, sexual orientations living in one place with no space or place for hate," Public Advocate Letitia James said.

CBS New York reports marchers tried to get close to the Intrepid, although stopped a block short, it did not seem to dampen their spirit that the president's schedule had been pushed back.

"The resistance is here, if you do not hear our voice, you will hear our vote," one protester shouted.

Sanitation trucks were lined up outside of Trump Towers, but the president decided to pass on visiting his residence.