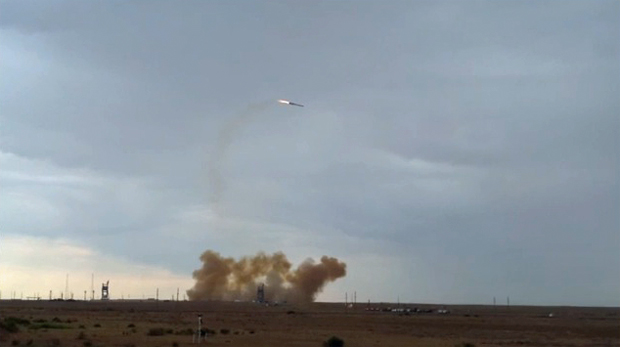 Three navigation satellites were reduced to smoldering embers early Tuesday morning after a failed Russian rocket launch. The rocket was unmanned, and no one was injured in the crash, Russian officials reported.

Just after the early morning lift-off, the Proton-M rocket exploded into a fireball, spiraling back to Earth at the Baikonur Cosmodrome spaceport in Kazakhstan.

News channel Rossiya-24's footage of the launch showed the rocket successfully propelling in a straight trajectory until, 17 seconds into the launch, the booster unexpectedly shut down the engine. The rocket made a sharp right turn, flying in a large arc pattern and spiraling for about two more seconds before the tail started to emit a copper trail of smoke. The tip of the rocket was the first section to break off, but within three seconds the entire 17-story rocket morphed into a waterfall of flames and dark smoke, before crashing into the ground more than a mile from the launch pad. The cloud of black smoke appears to stretch for miles.

The Interfax news agency quoted Kazakh Emergency Situations Minister Vladimir Bozhkov as saying that the burning rocket fuel has blanketed the launch pad with a toxic cloud. But he said authorities have yet to determine its potential danger to the environment.

The Russian Space Agency lost two satellites when another Proton-M booster crashed in Baikonur in August 2012. At the time, Russian Prime Minister Dmitry Medvedev said Russia had lost 10 satellites in seven failed launches in just over a year.

Russian space officials have blamed the failures on manufacturing flaws and engineering mistakes. But observers say that the problem is rooted in a post-Soviet industrial meltdown that has stalled the modernization of the space industry.

After Tuesday morning's crash, Medvedev instructed Dmitry Rogozin, the point man for industry and space, to come up with a plan to tighten control of the space industry and prevent a repeat of this accident.