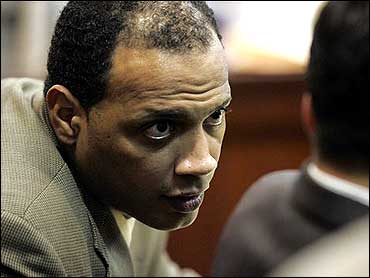 Three men were convicted of murder Tuesday in the slayings of six people who authorities said were bludgeoned with baseball bats in a dispute over an Xbox video game system.

The jury will return later in the week to decide whether the men should receive life in prison or death by lethal injection.

Jurors deliberated about six hours before returning its verdict against Troy Victorino, 29, and Michael Salas and Jerone Hunter, both 20.

Prosecutors said Victorino was angry with victim Erin Belanger, 22, who had him evicted when she found him living in her grandmother's home in Deltona. She kept some of his belongings, including some clothing and the video game system.

Victorino had no reaction as the verdict was read. Salas dropped his head as the first count was read.

During closing arguments, defense attorneys tried to shift the blame from their clients. Attorneys for Hunter and Salas said their clients were intimidated by the 6-foot-7-inch, 270-pound Victorino, and wouldn't have entered the house if they had not been threatened and coerced.

Salas and Hunter testified that they hit some of the victims, but they denied inflicting any fatal blows.

Jeff Dowdy, one of Victorino's attorneys, said his client was being unfairly blamed by the two other defendants.

"Their defense is: It's all Troy's fault," Dowdy said. "This is feeding frenzy; blame everything on Troy."

State Attorney John Tanner said it was unimportant who killed which person at the Deltona home. He also disputed the claims by Salas and Hunter about fearing Victorino.

Victorino denied being at the home when the 2004 killings occurred. He testified he was drinking with friends at a restaurant at the time, and denied involvement in the slayings.

He also testified he had permission to be at the home of Belanger's grandmother, and said he was not angry with Belanger.

Crime analysts said DNA evidence showed a pair of boots stained with the blood of several victims belonged to Victorino. Bloody prints matching the boots also were found at the crime scene.

A fourth defendant, Robert Cannon, 20, pleaded guilty in October to all the charges. But when he took the stand early in the trial, he refused to testify and said he wanted to withdraw his guilty plea because he was innocent. Chief Circuit Judge Bill Parsons hasn't decided whether he will allow the change.