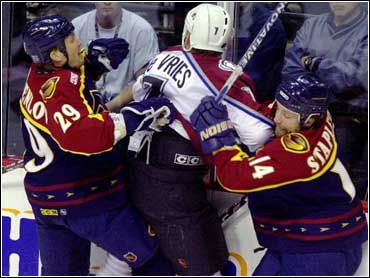 The six-week thrashing of Atlanta is over.

Ray Ferraro broke a tie game midway through the third period as the Atlanta Thrashers ended a 12-game losing streak with a 4-3 victory over the slumping Colorado Avalanche on Tuesday night.

Atlanta had gone 0-16-4 since Jan. 14. Hebert Vasiljevs scored his first career goal for the expansion Thrashers.

"It is a lot of fun to win. You almost forget what it's like," Ferraro said. It is a weight off for sure. I don't think I've ever been part of a losing streak of more than seven or eight games and that was with a couple of ties thrown in."

Though it may be a stretch, Ferraro joked that Atlanta's breakthrough coincided with the anniversary of the USA hockey team's improbable victory over the Soviet Union in the 1980 Winter Olympics.

"It is 20 years since the `Miracle on Ice?' Where was Al Michaels for this one?" Ferraro said.

After scoring seven goals in the last five games, Atlanta capitalized on Colorado penalties by converting 3 of 6 power-play chances to send the Avalanche to its fourth loss in six games.

Colorado missed a chance to move ahead of first-place Edmonton in the Northwest Division.

Atlanta's third power-play goal proved to be the difference as Ferraro followed Hnat Domenichelli's shot from the slot, slipped behind Avalanche goalie Marc Denis and pushed the puck past the left post with 9:49 remaining.

"We have good guys on the team. They kept trying," Atlanta coach Curt Fraser said. "I coach every day as if it is a new day, not a long march through the mud. We are in every gam and have not been rewarded for our hard work."

Colorado, 1-4-1 in its last six, failed to convert a power play after Ferraro's goal and finished the night 0-for-3 with a man-advantage.

"I'm not shocked at the result of this game," Colorado coach Bob Hartley said. "We're in a bad slump. We're not making great decisions and we're pressuring ourselves."

Ozolinsh scored two goals for the Avalanche, but he committed a costly turnover that Vasiljevs, a fellow Latvian, turned into a breakaway goal that tied the game 3-3 at 7:27 of the third.

Vasiljevs, called up last week, poked the puck away from Ozolinsh at the blue line and beat Denis with a backhand shot. Ozolinsh slammed his stick into the glass as Vasiljevs celebrated nearby.

"He looked a little sad, but I guess you don't look too happy when you get scored against," Vasiljevs said. "I might catch up with him if he talks to me. He might be mad at me."

Ozolinsh had given the Avalanche a 3-2 lead with a wrist shot from the right slot at 4:09.

Atlanta, which has one of the NHL's worst power-play units, converted two of its first three chances, the second coming when Patrik Stefan redirected a shot from the slot to give the Thrashers a 2-1 lead at 11:57 of the second.

The Avalanche pulled even heading into the third when Chris Drury took a centering pass from Alex Tanguay and beat Langkow for his 18th goal.

Milan Hejduk picked up his 100th career point on the play when he was credited with the second assist.

The teams traded goals in the first period as Ozolinsh scored from the slot at 5:27 and Nelson Emerson countered nine seconds into a power play, beating Denis from a bad angle at 17:49.

Denis made his second straight start in place of Patrick Roy, sidelined by a strained groin. Roy needs one victory to tie Jacques Plante (434) for second on the NHL's career list.