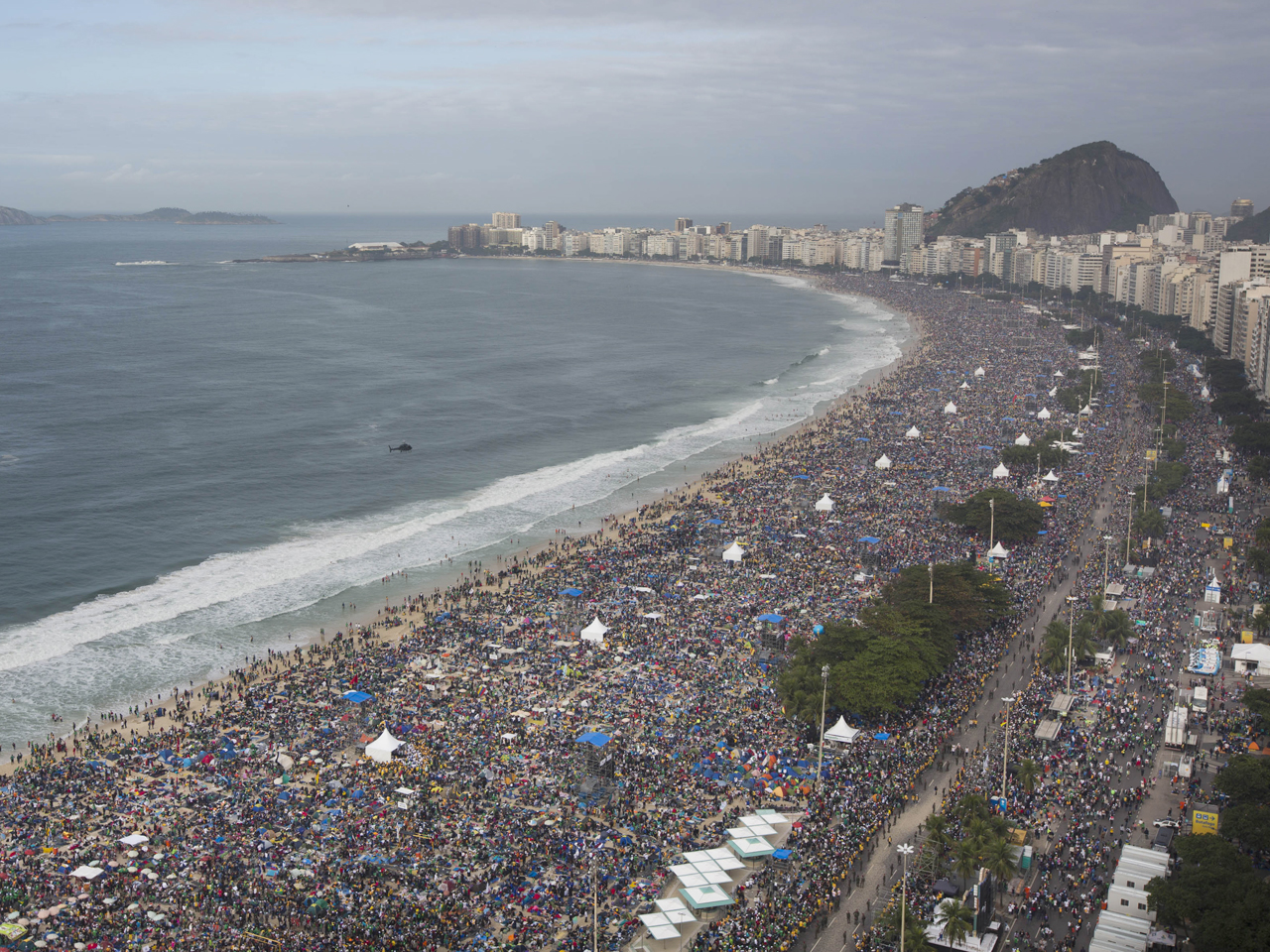 RIO DE JANEIRO Pilgrims staked out spots on the sand of Copacabana beach for an all-night slumber party ahead of the final Mass of Pope Francis' stay in Brazil, a trip that has drawn rapturous crowds of up to 3 million faithful.

Francis headed into the final hours of his first international trip riding a remarkable wave of popularity: By the time his open-sided car reached the stage for the vigil service Saturday night, the back seat was piled high with soccer jerseys, flags and flowers tossed to him by adoring pilgrims lining the beachfront route.

"I'm trembling, look how good you can see him!" gushed Fiorella Dias, a 16-year-old Brazilian who jumped for joy as she reviewed the video she shot as the pope passed by. "I have got to call my mother!"

The vigil drew a reported 3 million flag-waving, rosary-toting faithful, who overflowed Copacabana beach's 4 kilometers (2.5 miles) of white sand on the final evening of World Youth Day. The attendance figure, given by local media citing the mayor's office, is higher than the 1 million at the last World Youth Day vigil in Madrid in 2011, and far more than the 650,000 at Toronto's 2002 vigil.

Many of those watching the vigil had tears in their eyes as they listened to Francis' call for them to build up their church like his namesake, St. Francis of Assisi, was called to do.

"Jesus offers us something bigger than the World Cup!" Francis said, drawing cheers from the crowd in this soccer-mad nation.

On the beach, pilgrims staked out their spots on the sand, lounged and snacked, preparing for the all-night slumber party ahead of Sunday's Mass. Francis leaves Brazil Sunday evening.

"At church, it can be a bit tedious, but here it's amazing," marveled Anna Samson, a 21-year-old college senior from Long Beach, California.

"Seeing the pope, seeing the Stations of the Cross acted out live, seeing all these young people from all over," she said as she and two friends plied the beach in search of a place to spread their sleeping bags. "It's overwhelming, just amazing."

Rio's mayor has estimated that as many as 3 million people might turn out for Sunday's Mass.

Saturday night's vigil capped a busy day for the pope in which he drove home a message he has emphasized throughout the week in speeches, homilies and off-the-cuff remarks: the need for Catholics, lay and religious, to shake up the status quo, get out of their stuffy sacristies and reach the faithful on the margins of society or risk losing them to rival churches.

In the longest and most important speech of his four-month pontificate, Francis took a direct swipe at the "intellectual" message of the church that so characterized the pontificate of his predecessor, Benedict XVI. Speaking to Brazil's bishops, he said ordinary Catholics simply don't understand such lofty ideas and need to hear the simpler message of love, forgiveness and mercy that is at the core of the Catholic faith.

"At times we lose people because they don't understand what we are saying, because we have forgotten the language of simplicity and import an intellectualism foreign to our people," he said. "Without the grammar of simplicity, the church loses the very conditions which make it possible to fish for God in the deep waters of his mystery."

In a speech outlining the kind of church he wants, Francis asked bishops to reflect on why hundreds of thousands of Catholics have left the church for Protestant and Pentecostal congregations that have grown exponentially in recent decades in Brazil, particularly in its slums or favelas, where their charismatic message and nuts-and-bolts advice is welcome by the poor.

According to census data, the number of Catholics in Brazil dipped from 125 million in 2000 to 123 million in 2010, with the church's share of the total population dropping from 74 percent to 65 percent. During the same time period, the number of evangelical Protestants and Pentecostals skyrocketed from 26 million to 42 million, increasing from 15 percent to 22 percent of the population in 2010.

Francis offered a breathtakingly blunt list of explanations for the "exodus."

Francis asked if the church today can still "warm the hearts" of its faithful with priests who take time to listen to their problems and remain close to them.

"We need a church capable of rediscovering the maternal womb of mercy," he said. "Without mercy, we have little chance nowadays of becoming part of a world of `wounded' persons in need of understanding, forgiveness and love."

The Argentine pope began Saturday with a Mass in Rio's beehive-like modern cathedral where he exhorted 1,000 bishops from around the world to go out and find the faithful, a more diplomatic expression of the direct, off-the-cuff instructions he delivered to young Argentine pilgrims on Thursday. In those remarks, he urged the youngsters to make a "mess" in their dioceses and shake things up, even at the expense of confrontation with their bishops and priests.

"We cannot keep ourselves shut up in parishes, in our communities when so many people are waiting for the Gospel!" Francis said in his homily Saturday.

Francis' target audience is the poor and the marginalized — the people that history's first pope from Latin America has highlighted on this first trip of his pontificate. He has visited one of Rio's most violent slum areas, met with juvenile offenders and drug addicts.

He carried that message to a meeting with Brazil's political, economic and intellectual elite, urging them to look out for the poorest and use their leadership positions to work for the common good. He also called for greater dialogue between generations, religions and peoples during the speech at Rio's grand municipal theater.