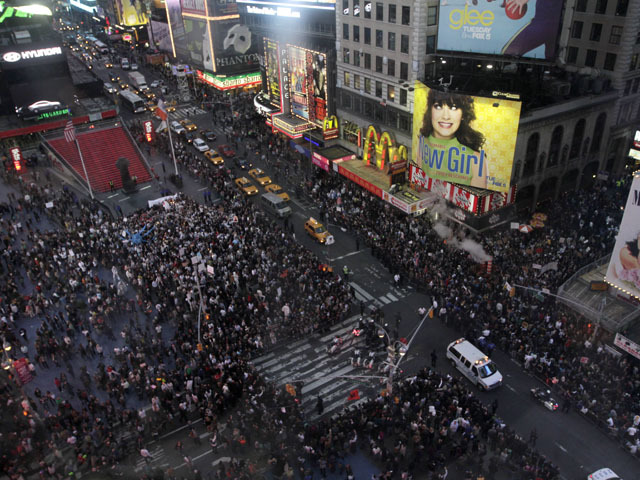 "Banks got bailed out, we got sold out!" protesters chanted from within police barricades. Police, some in riot gear and mounted on horses, tried to push them out of the square and onto the sidewalks in an attempt to funnel the crowds away.

Sandy Peterson of Salt Lake City, who was in Times Square after seeing "The Book of Mormon" musical on Broadway, got caught up in the disorder.

"We're getting out of here before this gets ugly," she said.

Police say more than 70 people have been arrested in New York City during demonstrations against corporate greed, including 45 in Times Square.

Two police officers suffered injuries and had to be hospitalized. One had a head injury.

Police spokesman Paul Browne says 42 people were arrested in Times Square at about 8 p.m. Saturday after being warned three times to disperse. Three others were arrested just after 6 p.m. while trying to take down police barriers.

It wasn't immediately clear what charges they might face.

Earlier in the day, two dozen protesters were arrested at a Citibank branch when they refused a manager's request to leave. Most were detained for trespassing.

Five other people wearing masks were arrested as demonstrators marched through Manhattan to Times Square.

Earlier in the day, demonstrators from the Occupy Wall Street encampment in New York City paraded to a Chase bank branch, banging drums, blowing horns and carrying signs decrying corporate greed. Marchers throughout the country emulated them in protests that ranged from about 50 people in Jackson, Miss., to about 2,000 in the larger city of Pittsburgh.

"Banks got bailed out. We got sold out," the crowd of as many as 1,000 in Manhattan chanted. A few protesters went inside the bank to close their accounts, but the group didn't stop other customers from getting inside or seek to blockade the business.

Police told the marchers to stay on the sidewalk, and the demonstration appeared to be fairly orderly as it wound through downtown streets.

Overseas, the protests turned violent in Rome, where police fired tear gas and water cannons as protesters turned the demonstration into a riot, smashing shop and bank windows, torching cars and hurling bottles. Dozens were injured.

Tens of thousands nicknamed "the indignant" marched in cities across Europe, as the protests that began in New York linked up with long-running demonstrations against government cost-cutting and failed financial policies in Europe. Protesters also turned out in Australia and Asia.

Stateside, among the demonstrators in New York withdrawing their money from Chase

was Lily Paulina, 29, an organizer with the United Auto Workers union who lives in Brooklyn. She said she was taking her money out because she was upset that JPMorgan Chase was making billions of dollars, while its customers struggled with bank fees and home foreclosures.

"Chase bank is making tons of money off of everyone ... while people in the working class are fighting just to keep a living wage in their neighborhood," she said.

"We aren't going to be a part of this system that doesn't work for us," said another demonstrator withdrawing her money, 20-year-old Brooklyn College student Biola Jeje.

Other demonstrations were planned around the city all day Saturday, including an anti-war march to mark the 10th anniversary of the war in Afghanistan.

Among the people participating in that march was Sergio Jimenez, 25, who said he quit his job in Texas to come to New York to protest.

"These wars in Afghanistan and Iraq were all based on lies," Jimenez said. "And if we're such an intelligent country, we should figure out other was to respond to terror, instead of with terror."

The weekend brought out protesters in other parts of the country as well for smaller demonstrations, and more rallies were planned in such cities as Little Rock, Ark., Providence, R.I.; and Seattle.

Nearly 1,500 gathered Saturday for a march past banks in downtown Orlando. About 50 people ranging from college students to older people met in a park in downtown Jackson, Miss., carrying signs calling for "Health Care Not Warfare." Organizers expected more people to come and go during the day.

Some made more considerable commitments to try to get their voices heard. Nearly 200 spent a cold night in tents in Grand Circus Park in Detroit, donning gloves, scarves and heavy coats to keep warm, said Helen Stockton, a 34-year-old certified midwife from Ypsilanti, and plan to remain there "as long as it takes to effect change."

"It's easy to ignore us," Stockton said. Then she referred to the financial institutions, saying, "But we are not going to ignore them. Every shiver in our bones reminds us of why we are here."

Hundreds more converged near the Michigan's Capitol in Lansing with the same message, the Lansing State Journal reported.

Rallies drew young and old, laborers and retirees. In Pittsburgh, marchers also included parents with children in strollers and even a doctor. The peaceful crowd of 1,500 to 2,000 stretched for two or three blocks.

"I see our members losing jobs. People are angry," said Janet Hill, 49, who works for the United Steelworker, which she said hosted a sign-making event prior to the march.

Retired teacher Albert Siemsen of Milwaukee said at a demonstration there that he'd grown angry watching school funding get cut at the same time that banks and corporations gained more influence in government. The 81-year-old wants to see tighter Wall Street regulation.

Around him, protesters held signs reading, "Keep your corporate hands off my government," and "Mr. Obama, Tear Down That Wall Street."

Massachusetts Gov. Deval Patrick visited protesters in Boston's Dewey Square for the first time. He said that after walking through the camp, he better understands the range of views and was sympathetic to concerns about unemployment, health care and the influence of money in politics.

And in Denver, a few thousand came to a rally in downtown Denver in support of the movement, KUSA-TV reported.

The Rev. Al Sharpton led a march in Washington that was not affiliated with the Occupy movement but shared similar goals. His rally was aimed at drumming up support for President Barack Obama's jobs plan. Thousands of demonstrators packed the lawn in the shadow of the Washington Monument to hear labor, education and civil rights leaders speak, including Sharpton.