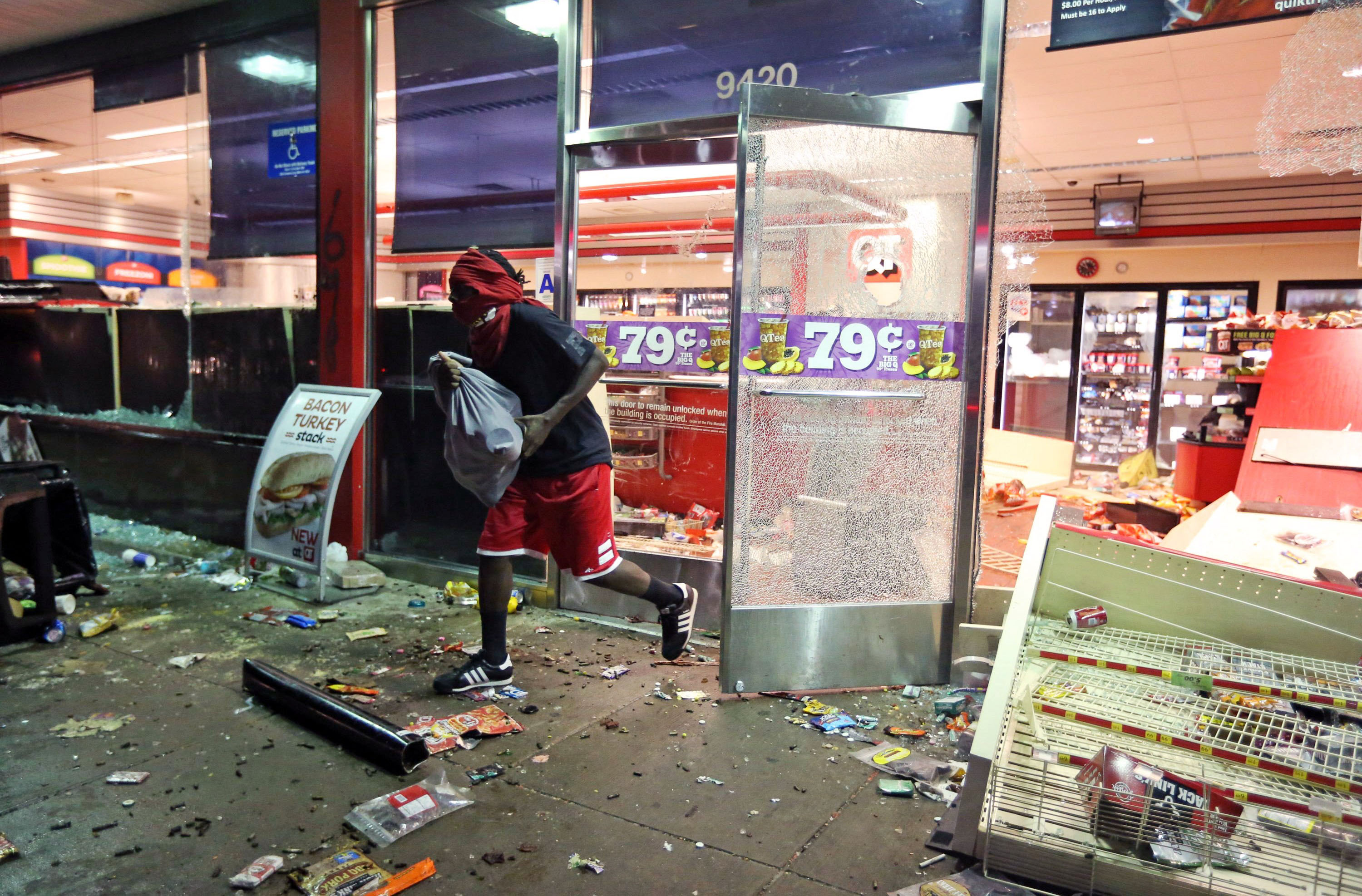 FERGUSON, Mo. -- People smashed car windows and carried away armloads of looted goods from stores Sunday night after thousands of people packed a suburban St. Louis area at a vigil for an unarmed black man who was shot and killed by a police officer.

The candlelight gathering was for 18-year-old Michael Brown, who police said was shot multiple times Saturday after a scuffle involving the officer, Brown and another person in Ferguson, a predominantly black suburb of the city.

Afterward, some people looted a convenience store. Several other stores along a main road near the shooting scene were broken into and looted, including a check-cashing store, a boutique and a small grocery store.

People were seen carrying bags of food and toilet paper. TV footage showed streams of people walking out of a liquor store carrying bottles of alcohol, and in some cases protesters were standing atop police cars or taunting officers who stood stoic, often in riot gear.

"Right now, the small group of people are creating a huge mess," Ferguson's mayor, James Knowles, told St. Louis KTVI-TV. "Contributing to the unrest that is going on is not going to help. ... We're only hurting ourselves, only hurting our community, hurting our neighbors. There's nothing productive from this."

As the investigation of Brown's death progresses, "we understand people want to vent their frustrations. We understand they want to speak out," Knowles added. "We're going to obviously try to urge calm."

Earlier in the day, a few hundred protesters had gathered outside Ferguson Police headquarters. At one point, many of them marched into an adjacent police building, some chanting "Don't shoot me" while holding their hands in the air. Officers stood at the top of a staircase, but didn't use force; the crowd eventually left.

County Police Chief Jon Belmar said the shooting occurred after an officer encountered two people -- one of whom was Brown -- on the street near an apartment complex in Ferguson.

The struggle spilled out into the street, where Brown was shot multiple times. Belmar said the exact number of shots wasn't known, but "it was more than just a couple." He also said all shell casings found at the scene matched the officer's gun. Police are still investigating why the officer shot Brown, who police have confirmed was unarmed.

Officials say the officer was attacked, but CBS News' Julian Johnson reports many in the community are not satisfied with that explanation.

Speaking to reporters at the scene, Dorian Johnson said he was with man with Michael Brown, and he gave a different account of events. Johnson said the officer pulled up next to the two teens and exchanged words with them before choking Brown and trying to pull him into the squad car. The officer, he said, then exited his car, fired a shot and chased after Brown, who was running for his life.

"We wasn't causing no harm to nobody [sic]," Johnson said. "We had no weapons on us at all."

Ferguson Police Chief Tom Jackson told KSDK-TV there was no apparent video footage of the shooting from a nearby apartment complex, or from any police cruiser dashboard cameras or body-worn cameras that the department recently bought but hasn't yet put in use.

Jackson said blood samples had been taken from Brown and the officer who shot him, with those toxicology tests generally expected to take weeks to complete.

Brown's mother, Lesley McSpadden, said he had graduated from high school and was about to enter a local college. She said she doesn't understand why police didn't subdue her son with a club or Taser, and she said the officer involved should be fired and prosecuted.

"I would like to see him go to jail with the death penalty," she said, fighting back tears.

The killing drew criticism from some civil rights leaders, who referred to the 2012 racially charged shooting of 17-year-old Trayvon Martin by a Florida neighborhood watch organizer who was acquitted of murder charges.

"We're outraged because yet again a young African-American man has been killed by law enforcement," said John Gaskin, who serves on both the St. Louis County and national boards of directors for the NAACP.

The Rev. Al Sharpton called the shooting "very disturbing" and said he planned to go to Ferguson to meet with the family.

St. Louis County Police Department is in charge of the investigation, and Dooley said he will request an FBI investigation. The U.S. Justice Department said Attorney General Eric Holder had instructed staff to monitor developments.

The race of the officer involved in the shooting has not been disclosed. He has been with the Ferguson Police Department for six years, Belmar said, and has been placed on paid administrative leave.