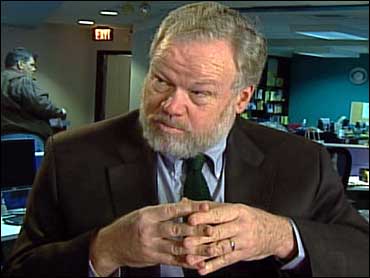 (CBS)
On CBSNews.com's "Washington Unplugged" today, author and Washington Post pentagon reporter Thomas Ricks suggested that the United States was nowhere near the finish line of its effort in Iraq.

"I think there are a lot of reasons Iraq '09 is going to be very tough and in fact harder than the last year of Bush's war," he told guest moderator John Dickerson. "And I think there is a good chance that Obama's war in Iraq will last longer than Bush's war [in Iraq]."

The author of "Fiasco" is out with a new book about the U.S. experience in Iraq during last two years of the Bush administration titled, "The Gamble: General Petraeus And The American Military Adventure In Iraq 2006-2008."

"There is no pacifistic branch of the U.S. military," Ricks said, calling President Obama's campaign promise to get American non-combat troops out of Iraq within 16 months "false phrase-ology."

"Newsflash for Obama," he said. "There is no such thing as non-combat troops…I think we are there for a long time."

Ricks then elaborated on the period covered in "The Gamble."

"It's quite a striking story," he said, noting that he did not know before he wrote the book that in 2007 the war "was turned over to the dissidents, to people who fundamentally disagreed with the invasion or who thought that the war was executed wrongly."

The author was speaking about military personnel and Pentagon advisors brought in to manage a war they did not necessarily support.

"Where are we now in Iraq?" Dickerson asked.

Ricks said there are two fundamental misunderstandings that Americans have about the war. The first involves the surge, which, he said, was much more difficult than most people thing. The second is the perception that the war is over.

"The war has changed several times," he said. "It was an invasion that morphed into an occupation into an insurgency then to a civil war, then into an American counter offensive. Just because it's changing doesn't mean it's ended."

Dickerson then turned to Afghanistan, asking what effect ground conditions in Iraq have on its neighboring battleground.

"The odd thing about Barack Obama's promise to get troops out of Iraq so that he can use them in Afghanistan is that it is not a departure from Bush, it is a continuation of Bush," Ricks said. "It's the same unwarranted optimism."

Ricks said there is also "some friction" over where to send U.S. troops in the Afghanistan-Pakistan region, which he says is partially because there are "some pretty big egos" making these decisions.

Below, watch Ricks on this week's episode of "Washington Unplugged." The 15-minute episode also includes an interview with Bill Burton from the White House, a journalists roundtable, and an update on the plane crash in Buffalo.