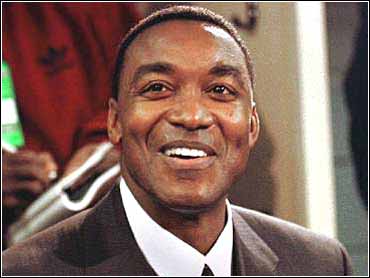 Isiah Thomas has signed a letter of agreement with the NBA players' union to explore the sale of the minor league Continental Basketball Association to the union, the league said Wednesday.

Thomas, who bought the CBA last October for $10 million, has been trying to sell it so he will be eligible to coach the Indiana Pacers if he is offered the job.

No details on the agreement between Thomas and union director Billy Hunter were immediately known. Hunter did not return phone calls.

"We'll be announcing further developments as they occur," Filip said, "But this is still in the early stages."

It was unclear where the union would get the funds to purchase the league or to operate it. Operating costs are estimated to be about $7 million annually.

Thomas still owes about $750,000 from his purchase of the CBA, according to the Indianapolis Star.

If the union buys the league, it would put in place the infrastructure that could be used if the players strike or are locked out by NBA owners when the current contract expires in 2004-05.

The NBA has announced plans for its own developmental league, starting in 2001.

Thomas and current Pacers assistant Rick Carlisle are the leading candidates to coach the Pacers. But to take the coaching job, Thomas has to sell the CBA.

Thomas had hoped to build the CBA into a developmental league for the NBA. The purchase included nine teams, the league and the league's marketing and licensing arm, CBA Properties.

CBA president Don Welsh told the Star that Thomas has owed the money for about seven months.

"However, at no time have we ever been in a situation when we have been out of cash," Welsh said. "In all businesses there are various series of raising capital to take your business to the next level, and that is exactly where we are in the growth cycle of the CBA."

According to financial documents and interviews with former team owners, Thomas paid about $5 million up front. The nine teams accepted a note calling for the balance to be paid in four annual installments, starting Oct. 7.

Those payments are not in dispute. In question is the payment of so-called holdbacks, where a buyer and a seller agree to allow the buyer to hold back part of the purchase price to cover unanticipated expenses.

Thomas, 39, negotiated a holdback provision with the league and with seven of the nine teams.

Welsh pledged the money will be paid in full. He blamed the delay on accounting differences between the teams, the league and Thomas. He said checks will go out shortly, but did not specify when.

"Isiah Thomas is an honorable person and will fully comply with everything he agreed to in the prchase of the CBA, and all owners will be fully paid with what is rightfully owed to them," he said.

That pledge failed to mollify some owners, who said Thomas stopped returning their phone calls and failed to meet to resolve the matter.

Some former owners worry that Thomas' existing debt will mean further delays when the annual payments totaling about $1.25 million become due in October.