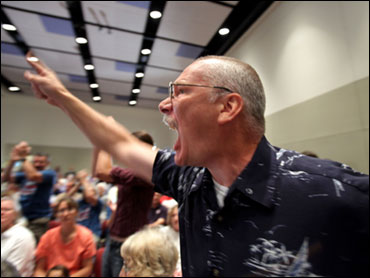 As the health care reform bill debate raged last August, Democrats returned to their home districts for what in years past had been relatively uneventful meetings with constituents.

Their meetings in the summer of 2009, of course, were anything but uneventful: Americans who would soon serve as the backbone of the Tea Party movement showed up at town hall meetings around the country to rail against lawmakers over the health care bill and other issues.

"One day, God's gonna stand before you," one man thundered at Sen. Arlen Specter on August 11th. "And he's gonna judge you and the rest of your damn cronies up on the Hill -- and then you will get your just desserts."

In an effort to avoid a repeat of such scenes - which can be both uncomfortable and politically damaging - Democrats are now holding fewer open town halls than they did in the past, according to the New York Times.

"Of the 255 Democrats who make up the majority in the House, only a handful held town-hall-style forums as legislators spent last week at home in their districts," the newspaper reports. "It was no scheduling accident."

Instead, Democrats are shifting toward invitation-only gatherings, controlled settings like tours of local businesses, and "town halls" that take place entirely over the telephone.

Lawmakers argue that such events are actually potentially more valuable than town halls, which they suggest are simply opportunities for political activists to make noise.

"At town halls, there was a group of people who were there to disrupt, purely politically driven, not there because they wanted to get answers or discuss the issues," Rep. Frank Kratovil Jr. (D-Md.) told the Times.

Michael Steel, a spokesman for House Majority Leader John Boehner, suggested to CBS News that "Democrats are hiding from the American people." He used as a counterpoint Republicans' "America Speaking Out" project, which he said reflects an effort by the House GOP to offer an agenda that reflects the concerns of voters.

Democrats are disputing that notion, arguing that their members did hundreds of public events even in the recent short recess.

"Interacting with constituents might be considered cutting edge for Washington Republicans, but it's what Democrats have been doing since the beginning of this Congress," said Doug Thornell, a spokesman for Rep. Chris Van Hollen. "The real difference is we are actually trying to solve problems not figure out our campaign message."

It remains to be seen to what degree Democrats will avoid town halls in the August recess. But they surely don't relish the prospect of returning home to Tea Party chants of "tyranny!" and comments like this one, which Nancy Snyder offered up last year: "We didn't stand up when they took prayer out of school and replaced it with drugs, we didn't stand up and we got legalized abortion and they're killing babies, and if we don't stand up now, God help us."