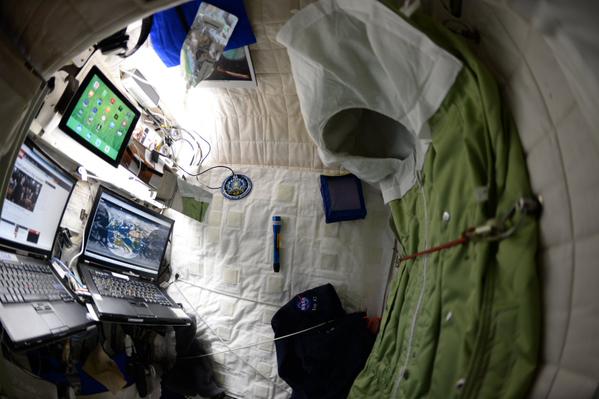 His bedroom is about the size of a cubbyhole but astronaut Scott Kelly doesn't seem to mind.

The American, who is spending a year at the International Space Station, tweeted a photo of his new digs with the message "My #bedroom aboard #ISS. All the comforts of #home. Well, most of them."

The shot features a bedroom that might seem familiar to anyone who has stayed at one of those capsule hotels in Japan. There is just enough room to sleep and work on one of several laptops. Though, of course, in a Japanese hotel, there's gravity, so you don't have to velcro your stuff to the wall to keep it in place.

In November 2012, Kelly and Russian cosmonaut Mikhail Kornienko, veteran of a 176-day stay aboard the station in 2010, were assigned to what NASA bills as the "One-Year Mission."

Joined by Soyuz TMA-16M commander Gennady Padalka, one of Russia's most experienced cosmonauts, Kelly and Kornienko blastoff from the Baikonur Cosmodrome in Kazakhstan last month.

During the course of the yearlong mission, Kelly and Kornienko will serve as test subjects for dozens of experiments to measure the long-term effects of weightlessness and to evaluate mitigation measures that will be needed for eventual multi-year missions to Mars.