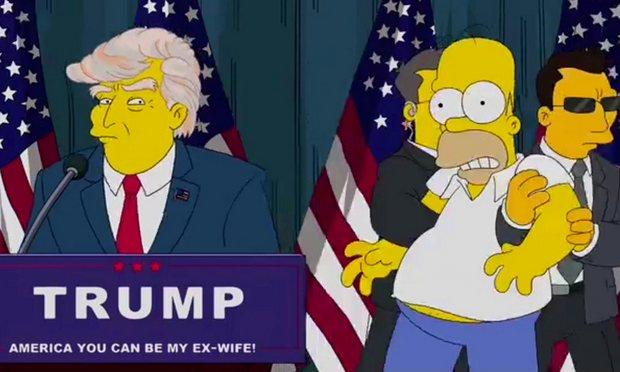 Much of America was incapable of picturing a President Trump, until the business mogul took the stage in New York early Wednesday morning to declare victory in the 2016 presidential election. “The Simpsons,” however, predicted a President Trump all the way back in 2000, when Fox aired an episode entitled “Bart to the Future.”

In the oddly prophetic episode, Bart Simpson is shown a grim vision of his life in his 30s. The trash-talking troublemaker has aged into an unsuccessful musician, who gets booed off stage during the rare gig he happens to book.

For his sister Lisa, however, the future looks bright. She has risen to the chief executive of the United States -- or, as she prefers to describe it, “America’s first straight female president.” The only problem? Lisa is occupying an Oval Office, recently vacated by former President Trump.

The episode paints a dismal picture about the effects of a Trump presidency on America. Lisa has inherited “quite a budget crunch from President Trump.” Her advisers inform her that Trump’s initiatives “created a generation of ultra-strong super-criminals.” In fact, the country is in such dire straits that it has “borrowed from every country in the world.”

Earlier this year, the episode’s writer, Dan Greaney, stated that he penned “Bart to the Future” as a “warning to America.” But now that Donald Trump has officially become the United States’ 45th president-elect -- and we’re fully out of warning territory -- let’s hope the real-word effects of a President Trump in the White House are rosier than the ones projected by “The Simpsons.”