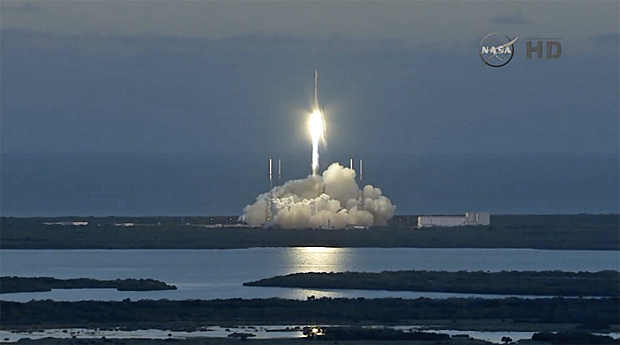 A SpaceX Falcon 9 rocket, grounded Sunday by an Air Force radar glitch and again on Tuesday by high winds aloft, finally roared to life and climbed into space Wednesday, boosting a space weather sentinel onto a million-mile trajectory toward an orbit where it can provide early warning of potentially dangerous solar storms.

"Everything has gone just as planned," said NASA launch commentator Mike Curie. "The Deep Space Climate observatory is free to discover, on its way to the L1 Lagrange Point where it will send data back to help protect those of us on planet Earth."

Initially climbing straight up atop a long jet of flame, the rocket quickly arced over and lined up on a flight path carrying it away to the east-northeast, thrilling area residents and tourists as it streaked through a cloudless sky.

Just under three minutes later, the first stage engines shut down, the stage was released and the flight continued under the power of a single second stage engine. The first of two "burns" ended on time about nine minutes after takeoff, putting the craft into a near-circular preliminary orbit at an altitude of about 114 miles.

After a 22-minute coast, a second 58-second firing was carried out to boost the craft out of Earth orbit and onto a trajectory carrying it toward Lagrange Point 1, some 930,000 miles toward the sun.

The National Oceanic and Atmospheric Administration's Deep Space Climate Observatory, or DSCOVR, spacecraft was released from the second stage at 6:39 p.m., 36 minutes after launch. By that point, DSCOVR's trajectory was projected to carry it 1.37 million miles from Earth.

The spacecraft was first suggested 17 years ago by then Vice President Al Gore to provide continuous views of the whole Earth via the internet. The Bush administration canceled the mission in 2001 and NASA put the spacecraft, dubbed "Goresat" by critics, into storage.

NOAA, meanwhile, decided it needed a space weather platform to monitor the solar wind and to provide early warning of impending geomagnetic storms that can wreak havoc with satellites, communications and power grids. The agency paid NASA to inspect and refurbish the satellite, changing its name and its primary mission to reflect the focus on space weather.

But the Deep Space Climate Observatory will still provide dramatic whole Earth views from its orbital perch nearly 1 million miles toward the sun and measure the amount of solar energy reaching the planet, and the amount reflected back out into space, with unprecedented precision.

"What this satellite will make it possible to do is to measure not only the energy coming into the Earth from the sun, which we can measure today, but we can also now for the first time measure the energy reflected back into space from the Earth," Gore told reporters at the launch site Sunday.

"You subtract that second number from the first number, that's the problem we've got to solve. Because the amount of energy that's being trapped in the atmosphere, it is growing. That's why the ice is melting and the sea level is rising in Miami Beach and a lot of other places."

In a statement on his web page Wednesday, Gore said "it was inspiring to witness the launch of the Deep Space Climate Observatory. DSCOVR has embarked on its mission to further our understanding of Earth and enable citizens and scientists alike to better understand the reality of the climate crisis and envision its solutions."

But the primary goal of the repurposed mission is keeping tabs on threatening space weather.

Tom Berger, director of NOAA's Space Weather Prediction Center in Boulder, Colorado, said Sunday that DSCOVR "will provide the observations necessary to help us deliver warnings and alerts to industries affected by space weather so they can take action to protect infrastructure and be more resilient in the face of severe events."

It will take about three-and-a-half months for DSCOVR to reach its destination at the L1 point, where the gravity of Earth and its star roughly balance, allowing the satellite to remain in line with both bodies with a minimal expenditure of propellant.

After its instruments and subsystems are checked out and calibrated, NASA will turn the satellite over to NOAA this summer to begin routine observations. The $340 million cost of the mission was shared equally by NOAA, NASA and the Air Force, which arranged for the Falcon 9 rocket.

SpaceX initially planned an attempt to fly the spent first stage back to an autonomous powered landing on the broad deck of a company barge stationed several hundred miles off the coast of Florida.

A similar attempt was partially successful in January, but the rocket ran out of hydraulic fluid for its stabilization fins and the booster crashed on the deck of the ship. This time around, hydraulic flight wasn't expected to be a problem, but the deep space trajectory meant the booster would only have enough propellant for two rocket firings to slow down and land instead of three.

As it turned out, it was a moot point. The company reported extreme sea conditions, including waves towering two to three stories tall, and problems with one of four stabilizing thrusters needed to keep the barge in position.

As a result, the returning booster stage was expected to fly a normal descent trajectory, settling to an ocean splashdown instead of an upright landing on the barge. While SpaceX still expected to collect "valuable landing data," the booster's "survival is highly unlikely."