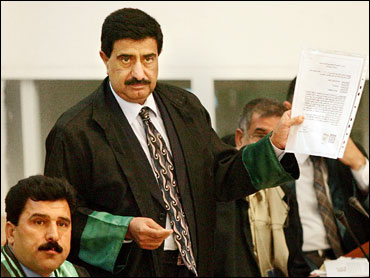 As relatives of two kidnapped U.S. soldiers awaited DNA test results on bodies found Monday in Iraq, one of Saddam Hussein's lawyers was abducted — and shortly thereafter, found shot to death. He's the third member of the legal team to be murdered.

The lead lawyer for the deposed Iraqi ruler, Khalil al-Dulami, says another member of the legal team - Khamis al-Obeidi, who represented Saddam and his half brother Barzan Ibrahim in their eight-month-old trial - was abducted at 7 a.m. from his home in Baghdad by men wearing police uniforms.

Police say Al-Obeidi was later found shot to death on a street near Sadr City, a Shiite neighborhood in Baghdad.

Sunni Arabs were dominant under Saddam's rule but lost power to majority Shiites after his ouster in April 2004.

Al-Dulaimi shuttles between Amman, Jordan, and the Iraqi capital but al-Obeidi chose to continue to living in Baghdad, despite the dangers there, heightened by his role as a member of Saddam's defense team.

Reacting to the assassination, Al-Dulaimi Wednesday blamed the Interior Ministry, which Sunnis claim has been infiltrated by Shiite death squads.

"We strongly condemn this act and we condemn the killings done by the Interior Ministry forces against Iraqis," he said, adding that U.S.-led forces also bear responsibility because the war has allowed Shiite militias to gain influence in Iraq.

A dozen masked gunmen abducted defense lawyer Saadoun al-Janabi from his Baghdad office the day after the trial's opening session in October. His body was found the next day with two bullets in his head. Nearly three weeks later, defense lawyer Adel al-Zubeidi was assassinated in a brazen daylight ambush in Baghdad. A colleague who was wounded fled the country.

The defense has asked Iraqi authorities for increased protection and threatened to boycott the trial unless this was provided.

The deposed leader and the other seven are charged with killing more than 140 Shiites in the town of Dujail in 1982.