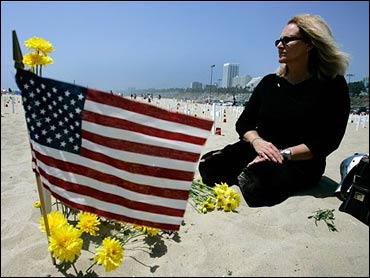 A source says U.S. military investigators have concluded that two California soldiers shot to death in Iraq were murdered by one or more Iraqi civil defense officers who were on patrol with them.

The deaths of California National Guardsmen Spc. Patrick R. McCaffrey Sr. and 1st Lt. Andre D. Tyson were originally attributed to an ambush during a patrol near Balad, Iraq, on June 22, 2004.

A U.S. military official says an Army Criminal Investigation Division report expected to be released Wednesday says that one or more of the Iraqi officers fired on the American soldiers.

Word of the new facts in the case comes as military families cope with the shock of this week's discovery in Iraq of remains believed to be that of kidnapped soldiers Pfc. Kristian Menchaca and Pfc. Thomas L. Tucker. DNA tests have been ordered to definitively identify the bodies.

The families of McCaffrey and Tyson are to be briefed on the report's by Brig. Gen. Oscar Hilman, the soldiers' commander at the time, and three other officers.

"When they come, I have my list of questions ready, and I want these answers and I don't want lies," said McCaffrey's mother, Nadia McCaffrey, in an Associated Press interview.

McCaffrey says soldiers who witnessed the attack told her that two Iraqi patrolmen opened fire on her son's unit. She says the witnesses also said a third gunman simultaneously drove up to the American unit in a van, climbed onto the vehicle and fired at the Americans.

"Nothing is clear. Nothing is clear," says McCaffrey. Her son was shot eight times by bullets of various calibers, some of which penetrated his body armor, she said. She believes he bled to death.

Nadia McCaffrey has become a vocal critic of the war in Iraq, and says her son had reservations about it, too, though he served well and was promoted posthumously to sergeant.

"I really want this story to come out; I want people to know what happened to my son," she said. "There is no doubt to me that this [ambushes by attached Iraqi units] is still happening to soldiers today, but our chain of command is awfully reckless; they don't seem to give a damn about what's happening to soldiers."

Patrick McCaffrey joined the National Guard the day after the terrorist attacks of Sept. 11, 2001, his mother said.

Tyson's family could not be located, and a message left with his former unit was not immediately returned.

McCaffrey, 34, and Tyson, 33, were members of the California National Guard. Both were assigned to the Army National Guard's 579th Engineer Battalion, based in Petaluma.

Sen. Barbara Boxer, D-Calif., pressed the Pentagon for answers about the case when Nadia McCaffrey was not satisfied by explanations from the military.

"Mrs. McCaffrey is set to receive a briefing from Pentagon officials (Wednesday) afternoon in California, during which we hope they will provide her with a full report of the facts surrounding Sgt. McCaffrey's death," said Natalie Ravitz, a Boxer spokeswoman.

There have been several other high-profile cases in recent years of GI casualties which later turned out to have occurred in dramatically different circumstances than originally reported.

The best known may be that of Army Cpl. Pat Tillman, a 27-year-old pro football player who, like McCaffrey, joined the military after the Sept. 11 attacks.

Tillman died along a canyon road in Afghanistan in April 2004. His family was initially told that he was killed by enemy fire; later, they were told he was shot during a confused confrontation between his Army Ranger unit and other U.S. troops.

A new investigation is underway into whether there was criminal negligence by U.S. soldiers in connection with Tillman's death.

Another case – the May 2004 death of Pfc. Jesse Buryj in Karbala, Iraq – has his Canton, Ohio mother calling for a change she believes would help other military families.

Peggy Buryj says there should be an independent panel that military families can go to in cases where the cause of death is in question.

Pfc. Buryj's widow, Amber, says she was told that he was killed in "a car accident, like a Humvee accident" just three months after arriving in Iraq.

Two and half months later, the death certificate arrived, stating that Buryj died of a gunshot wound – information Peggy Buryj says was news to her.

Another seven months later, the autopsy report said the shot was a case of friendly fire – shots fired when a dump truck rammed a checkpoint being guarded by U.S. and Polish troops.

Peggy Buryj says at one point investigators told her they thought a Polish soldier fired the shot – an assertion Poland denies.

The Army's most recent report places the blame on American friendly fire.

"We need an independent body we could go to," says Peggy Buryj. "That's the best thing that can happen out of Jesse's death."