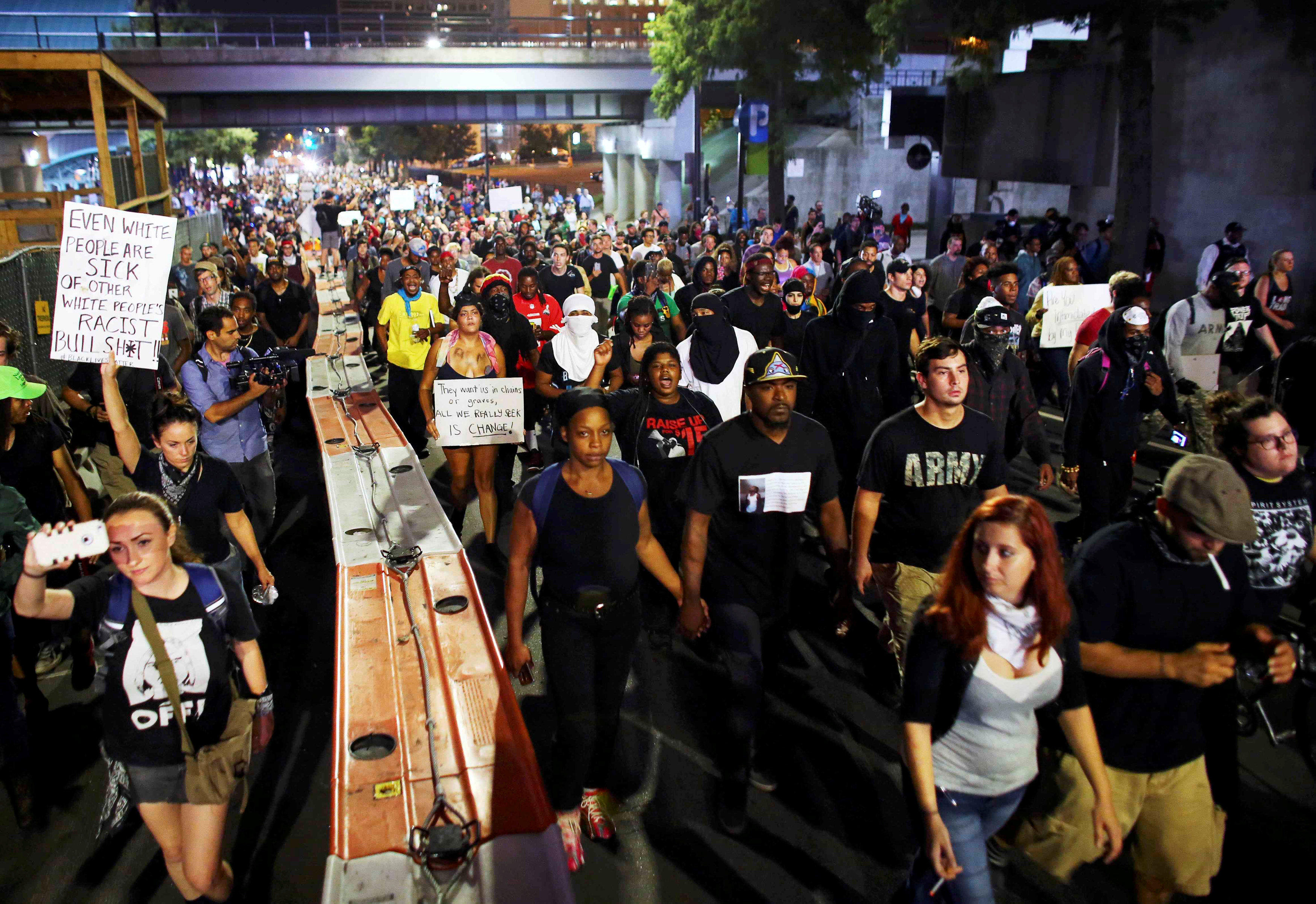 Still, pressure mounted for police to release video that could resolve wildly different accounts of the shooting of a black man.

Protesters chanted “release the tape” and “we want the tape” while briefly blocking an intersection near Bank of America headquarters and later climbing the steps in front of the city government center. Later, several dozen demonstrators climbed onto an interstate highway running through the city but were pushed back by police in riot gear.

The protests lacked the violence and property damage of previous nights, and a midnight curfew enacted by the mayor encouraged a stopping point for the demonstrations. Local officers’ ranks were augmented by members of the National Guard carrying rifles and guarding office buildings against the threat of property damage. The curfew was in effect through 6 a.m.

As of Friday morning, midnight-to-6 a.m. curfew was to be enforced every overnight until the mayor discontinues it.

Many protesters were seen shaking officers’ hands and talking calmly about social issues, reports CBS Charlotte affiliate WBTV. At one point, a line of protesters and police took turns thanking National Guard troops with handshakes and even hugs.

Around 11:30 p.m., police said no injuries had been reported. But then, that changed:

Police didn’t release the officers’ names or say what the chemical may have been.

So far, authorities have resisted releasing police dashcam and body camera footage of the death of 43-year Keith Lamont Scott earlier this week. His family was shown the footage Thursday and demanded that police release it to the public. The family’s lawyer said he couldn’t tell whether Scott was holding a gun.

But Charlotte-Mecklenburg Police Chief Kerr Putney said earlier in the day that releasing the footage of Scott’s killing could undermine the investigation. He told reporters the video will be made public when he believes there is a “compelling reason” to do so.

“You shouldn’t expect it to be released,” Putney said. “I’m not going to jeopardize the investigation.”

Police Capt. Mike Campagna told reporters officers wouldn’t seek to move curfew violators off the street as long as they were peaceful. The demonstrators’ ranks appeared to thin from their peak of several hundred as the early morning arrived. Charlotte’s streets were mostly clear by 2 a.m., WBTV says.

Charlotte is the latest U.S. city to be shaken by protests and recriminations over the death of a black man at the hands of police, a list that includes Baltimore, Milwaukee, Chicago, New York and Ferguson, Missouri.

In Tulsa, Oklahoma, prosecutors charged a white officer with manslaughter Thursday for killing an unarmed black man on a city street last week.

In Charlotte, scores of protesters Wednesday night attacked reporters and others, set fires and smashed windows of hotels, office buildings and restaurants in the city’s bustling downtown section. The NASCAR Hall of Fame was among the places damaged.

Forty-four people were arrested at Wednesday’s protests, and one protester who was shot died at the hospital Thursday; city officials said police did not shoot the man and no arrests have been made in 26-year-old Justin Carr’s death.

Police have said Scott was shot to death Tuesday by a black officer after he disregarded loud, repeated warnings to drop his gun. Neighbors, though, have said he was holding only a book. The police chief said a gun was found next to the dead man, and there was no book.

Putney said that he has seen the video and it does not contain “absolute, definitive evidence that would confirm that a person was pointing a gun.” But he added: “When taken in the totality of all the other evidence, it supports what we said.”

Justin Bamberg, an attorney for Scott’s family, watched the video with the slain man’s relatives. He said Scott gets out of his vehicle calmly.

“While police did give him several commands, he did not aggressively approach them or raise his hands at members of law enforcement at any time. It is impossible to discern from the videos what, if anything, Mr. Scott is holding in his hands,” Bamberg said in a statement.

Scott was shot as he walked slowly backward with his hands by his side, Bamberg said.

The lawyer said at a news conference earlier in the day that Scott’s wife saw him get shot “and that’s something she will never, ever forget.” That is the first time anyone connected with the case has said the wife witnessed the shooting. Bamberg gave no details on what the wife saw.

Mayor Roberts, who also watched the footage of the shooting, was asked by CNN whether she saw Scott holding a gun.

“It is not a very clear picture and the gun in question is a small gun. And it was not easy to see ... so it is ambiguous,” she replied.

Experts who track shootings by police noted that the release of videos can often quell protest violence, and that the footage sometimes shows that events unfolded differently than the official account.

“What we’ve seen in too many situations now is that the videos tell the truth and the police who were involved in the shooting tell lies,” said Randolph McLaughlin, a professor at Pace University School of Law. He said it is “irresponsible” of police not to release the video immediately.

Other cities have released footage of police shootings. Just this week, Tulsa police let the public see video of the disputed Sept. 16 shooting, though the footage left important questions unanswered.

The police chief acknowledged that he has promised transparency in the investigation, but said, “I’m telling you right now, if you think I say we should display a victim’s worst day for consumption, that is not the transparency I’m speaking of.”