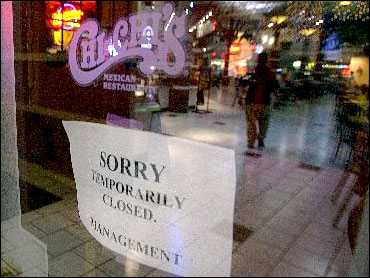 Investigators broadened their search Friday for the source of a growing hepatitis A outbreak in western Pennsylvania believed to be the nation's largest on record.

A third person died Friday and at least 490 people, including 31 in Ohio, have been sickened since the outbreak began to unfold last week around a Mexican restaurant 25 miles northwest of Pittsburgh.

Health officials initially focused their investigation on employees at a Chi-Chi's restaurant, 11 of whom were diagnosed with hepatitis A. Following physical examinations and interviews with those employees, investigators have now turned to the possible contamination of produce or other food items shipped into the restaurant.

It is believed to be the largest hepatitis outbreak on record in the United States, said David Daigle, a spokesman for the Centers for Disease Control and Prevention.

The Chi-Chi's at the Beaver Valley Mall in Monaca has been shut down and the restaurant chain removed green onions from kitchens at all of its 100 locations, said Bill Zavertnik, chief operating officer of the Louisville, Ky.-based company.

In September, about 280 people in Georgia and Tennessee were sickened by contaminated green onions, including 210 people who ate at restaurants in the Atlanta area.

"We've taken the action to remove them based on our abundance of caution with regard to green onions," Zavertnik said. "There's no definitive information that green onions played a role. However, we don't know. Authorities are looking at them and it was a potential source."

Investigators have not ruled out any food item or the possibility that an employee may be the source of the outbreak, said Pennsylvania Department of Health Secretary Calvin Johnson.

Efforts were being made Friday to tame rumors of infections at other restaurants in the region. Health officials met with worried shoppers at the mall to calm fears that the virus was spreading out of control.

Officials at the Beaver Valley Mall said sales at the food court were off by as much as 40 percent and sales throughout the mall were down as much as 25 percent.

Rep. Mike Veon, D-Beaver, attended a news conference Friday at the mall and ate a sandwich he purchased there.

The most recent victim, John Spratt, 46, of Aliquippa, died early Friday morning from complications of hepatitis A, according to the Allegheny County Coroner.

It was the second death in three days connected to the outbreak.

All three ate at the Chi-Chi's restaurant in October, according to family members.

Infectious disease experts say finding the source of the outbreak could be challenging because hepatitis A has a long incubation period, meaning the virus could be spread to many places before it's detected. Pennsylvania health officials began warning the public Nov. 3.

The disease can be spread by an infected person who doesn't wash his hands before handling food, eating utensils or even ice used in drinks. It can also be spread on uncooked foods, like green onions.