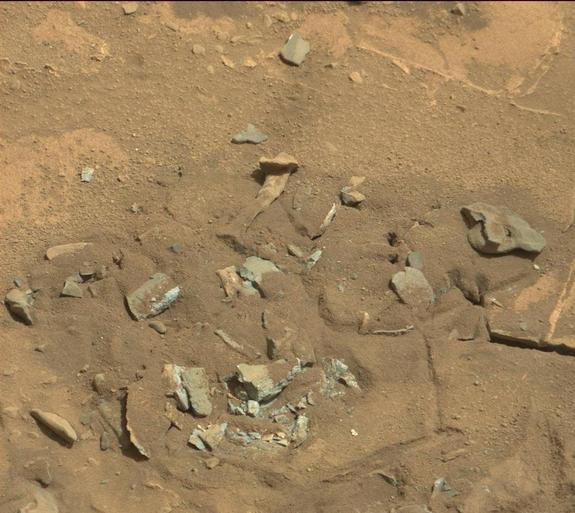 A photo from NASA's Curiosity rover on Mars set the Internet abuzz this week with claims that the robot had found a "thigh bone" on the Red Planet. But not so fast. That so-called bone? Just a weathered Martian rock, NASA says.

The erroneous bone claim first appeared on a UFO blog and was quickly picked up by media outlets. So much so, that NASA released Curiosity's "thigh bone" Mars rock photo with a science explanation on Aug. 21.

In the photo description, NASA officials wrote that while "this Mars rock may look like a femur thigh bone," it is not the fossilized remains of a mysterious Martian. "Mission science team members think its shape is likely sculpted by erosion, either wind or water."

The Curiosity rover has found evidence that Mars was once a habitable place in the ancient past, but there is no evidence that creatures large enough to leave a bone behind ever existed on the planet.

"If life ever existed on Mars, scientists expect that it would be small simple life forms called microbes," NASA officials wrote in the photo description. "Mars likely never had enough oxygen in its atmosphere and elsewhere to support more complex organisms. Thus, large fossils are not likely."

There is a long tradition of seeing shapes in Mars rocks that don't reflect reality. The phenomenon in which the human brain perceives faces, animals or other shapes that aren't really there is known as pareidolia.

That Mars illusion history dates back to the late 1800s, when astronomers reported seeing canals on the Red Planet in telescope views. Then in 1976, a photo from NASA's Viking 1 orbiter revealed a formation that gained fame as the "Face on Mars." Later observations by NASA and European spacecraft showed no face, just a large rock feature, proving the face was just a trick of shadow and light.

Since the "Face on Mars," photos from Mars orbiters and rovers have captured shapes resembling a lizard, a rat and even a jelly donut -- all of them just illusions or strange rock formations on the Red Planet.

NASA's 1-ton Curiosity rover has been exploring Mars since its arrival in August 2012.