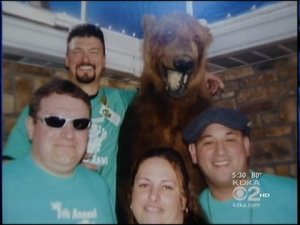 (CBS/AP) UNIONTOWN, Pa. - Seven men each paid more than $1,000 to repair a stuffed bear they were accused of damaging when it was stolen from a southwestern Pennsylvania bar.

In exchange, the judge in the case dismissed the theft charges against the men.

Tuesday's preliminary hearing was canceled when the men paid a total of $8,722 in restitution to the owner of Sam's Restaurant and the Eagle's Nest Bar in Uniontown, where the 800-pound, 8-foot tall bear was stolen Sept. 18.

The Pittsburgh Tribune-Review says the owner's friend shot the bear 10 years ago while hunting in Russia and had it mounted and shipped to him as a gift.

The bear has been a conversation piece and popular photo item for patrons. It was damaged when the thieves carried it down some stairs to a pickup truck.