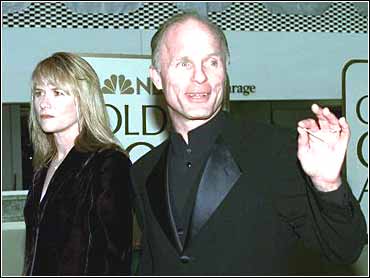 Ed Harris and Amy Madigan are living proof of the old adage that opposites attract. She’s outgoing with a giggle that won’t quit. He’s more introspective, and coaxing a laugh out of him can take some work.

But, reports CBS News Sunday Morning Correspondent Rita Braver, they share an unwavering commitment to each other.

That partnership is on display in Pollock, Harris’s new film about artist Jackson Pollock. Harris produced, starred, and made his directing debut in the new film. He cast Madigan in the juicy role of Peggy Guggenheim, Pollock’s cranky art patron.

She did not get the bigger part of Pollock's wife, but she says she's not disappointed.

"If I was casting the film, I would not cast Amy for that part," explains the actress. "I don't think I'm the right person for it... I really do mean it was not a disappointment for me, because it was really more about Ed getting the film the way that he wanted it to be."

Interracial marriages now more common, but not without challenges
In fact, making this film became an obsession for Harris. It started back in 1986, when his father sent him a book about Pollock and pointed out the striking physical resemblance between the artist and the actor. Harris became fascinated by the hard-drinking, volatile, and sometimes violent king of American abstract expressionism. He spent most of the '90s working on it.

"I spent a lot of time with the script," he says. "I had a lot of feeling about it... I would have been hard pressed to tell you what my vision was, in particular. I had a very specific personal feeling about this, and I didn't want to just hand it over to someone else and...follow their guidance, you know."

By then, Harris had realized that he and Pollock shared more than physical qualities: "A deep kind of insecurity on some level," he says. "A desire to do one's best, and ultimate confidence in one's ability. A need for approval."

Harris was determined that the film be authentic. He studied Pollock and even took up painting himself in order to recreate the artist’s sense of passionate abandon

"And that was the most freeing time for me, really, in the whole process, was when I got to paint," he recalls, "'cause i was...really trying to create something… Whether it works or not is not even the point. And so I pretty much just painted, and they filmed me."

What was it like for Madigan to work and live with her husband when he was playing such an intense character?

"Well, I didn’t see Ed a lot, which probably was the saving grace for the whole family, she says with a laugh. "But I like working with Ed. And he had a lot of hats to wear on this one, and he was certainly kind of frayed at some points. But I think if you’re intimate with somebody, it’s a good idea if you work with them, or it’s a really bad idea. I don’t think there’s lots of shades of gray. And it seems to work out pretty well for Ed and I."

In fact, the two have worked together frequently over the years, in films like Riders of the Purple Sage. It was while they were making Places in the Heart. It was during the filming of that one that they got married, 17 years ago.

Recalls Harris, "we had made a decision we were going to be married on Monday and must have had the weekend to think about it... But I remember waking up Monday morning going, 'Oh!' You know. I was 'Ooooh!' She said, 'We don’t have to get married today if you don’t want to.' I said, 'Well, let's go have some breakfast.' So we had a little breakfast in this little coffee shop and a little cupof coffee and a cigarette, and we felt a little better, and then we went down to the justice of the peace, and that was it."

Harris: "Yeah. It was surreal."

Madigan: "He had to put his head between his legs and then he was okay."

In addition to their work together, they have each been successful independently. Madigan played Kevin Costner’s wife in Field of Dreams. She also took a highly acclaimed turn as Stella (opposite Alec Baldwin) in A Streetcar Named Desire. And she was nominated for a best supporting actress Oscar in 1986 for her role as Gene Hackman’s troubled daughter in Twice In a Lifetime.

Harris first burst on to the national scene with his role as astronaut John Glenn in The Right Stuff. He received an Academy Award nomination as best supporting actor for playing another space-related role, the ground commander in Apollo 13. And Harris was nominated again for his supporting role as the television director in The Truman Show.

Do Harris and Madigan ever feel competitive with one another?

"No, not any more," says Harris. "I think, the first year or two, there was a little bit of that in me, at least."

In fact, Harris and Madigan, both age 50, and their 7-year-old daughter seem to have a remarkablwell-adjusted life--especially for two movie stars…

"He's really the best friend I have," says Madigan. "I want to hang out with him all the time, so I'm pretty lucky."