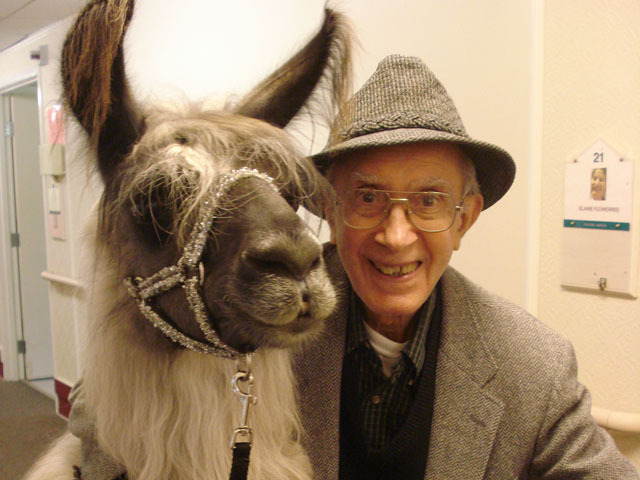 Therapy animals like dogs, cats and horses are sometimes brought into health care facilities to help people suffering from illnesses or physical conditions boost their health and happiness.

CBS affiliate KOIN in Portland, Ore., reports the unique pair light up every room they enter at the hospital.

"I never realized the power animals have to bring healing and joy to people like this," said Kelly Schmidt, a social worker at Providence Children's Center in Oregon. "I truly believe they are given a purpose more than just entertainment."

The animals even ride the elevators (as seen in the video above).

Rojo is an "old pro" at making children happier, according to Schmidt. His owner, Lori Gregory, operator of Mtn Peaks Therapy Llamas and Alpacas in Vancouver, Wash., told the station that once at a local fair someone suggested her huggable llama become a therapy animal. The rest was history, and Gregory said like the patients, she too feels a rush when she introduces her animals -- which are often dressed in funny hats and other silly outfits -- at hospitals and other medical facilities.

"That's why it started giving me chills and that's when it kind of became an addiction," she told KOIN 6 News. "When you realize that they have this amazing ability to create a natural response therapeutic-wise to get people to do things they normally wouldn't do."

On its website, Mtn Peaks says its animals have made more than 650 therapeutic visits to patients since the organization was founded in 2007.

Rojo has grown a following, even getting his own Facebook fan page.

Therapy animals, or animal-assisted therapy, is designed to promote improvement in human physical, social, emotional, or cognitive function, according to the American Veterinary Medical Association (AVMA). Therapy can occur in a group setting or individually, and can benefit patient populations from the young to elderly, to those in hospitals, nursing homes, assisted-living homes and rehabilitation facilities.

Other examples of more unique therapy animals include miniature horses, elephants (which have been used in Thailand to help some children with autism), helper monkeys and animals with disabilities.