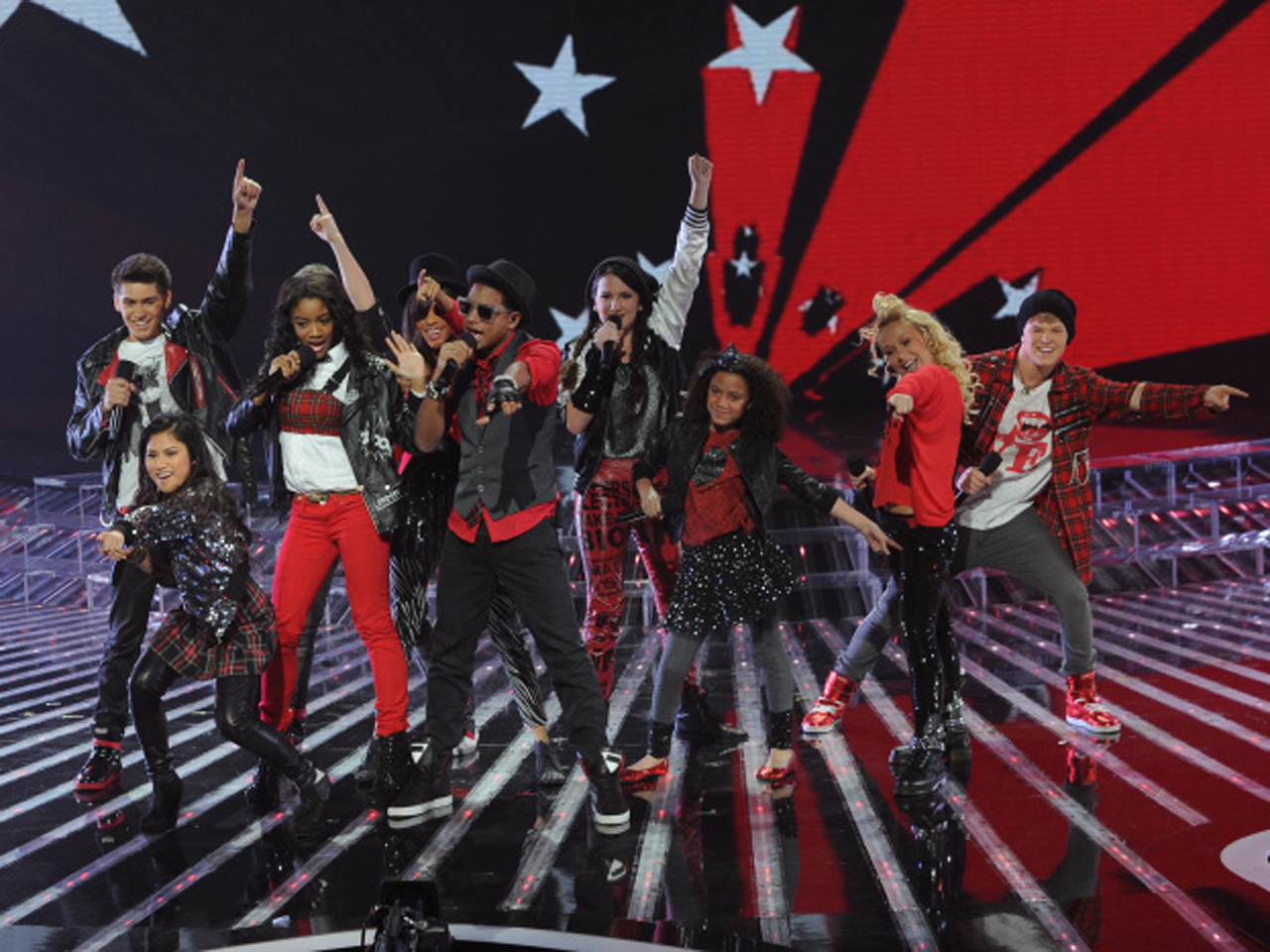 (CBS) Like a Croatian high jumper, "The X Factor" took a long run-up.

But, as the final 12 sang live, the news filtered through that not only had the show been picked up for another season, but that it was also already the top reality series on broadcast television.

In essence, America, you're stuck with it. It's moved into your spare room. It's lounging on your living room sofa, smoking a joint. So lie back and bathe in its unique aroma of pathos, with a tinge of Aramis.

"It's not about the judges any more. Now it's about America," said Cowell, as last night's show began. We'll see how true that is.

So yes, America would vote one act off. And, an even greater yes this, America could vote on Twitter. The Twitter hashtag was displayed on screen throughout. Would all this modern gizmo worship mean that the young and the disaffected would spend a moment away from Occupy Wall Street to tweet a vote or 20?

First into the cauldron of socially networked uncertainty were Stereo Hogzz. They sing. They dance. They stress. They performed Janet Jackson's "Rhythm Nation." There was a lot of energy. There was a lot of militarism. Their arm gestures verged on the Germanic, circa 1939. This was as original as war.

Immediately, Simon Cowell offered this: "I don't think there's a band in the world right now that's as good as you."

Chris Rene is now six months clean and sober. We saw him without his trilby. He sang something from the Carpenters. It was, regretfully, wooden. It was also the shade of wood that is, well, like a suburban kitchen counter: beige. There were flames burning all around him. They could be symbolic.

"When the track started, you put him in hell," said Cowell, turning to L.A. Reid. However, even he thought Rene was somehow enchanting.

Leroy Bell, on the other hand, has seen it all before. Well, he is 60. He has two daughters in their 30s. And he's written songs for such greats as the Temptations and Elton John. What the hell was he doing here?

"I need him to dig deeper," said his mentor, Nicole Scherzinger, who really knows depth.

To compare Bell to Rene is like comparing Diana Ross with, well, Scherzinger. His rendition of Lonestar's "Already There" had, at the very least, strong vocals, genuine feeling and no flames of hell. It wasn't, however, entirely convincing.

"You've got a confidence issue," said Cowell, with odd wisdom. "I don't think Nicole has quite understood you," he added. "It looked very dated with the piano player up there."

We paused then so that the astoundingly bland host, Steve Jones (think Catherine Zeta Jones without the Catherine and the Zeta), could tell us just how many tweets were being sent about the show. This is a modern singing show. It's not like that fuddy-duddy "American Idol" nonsense. It's socially networked. It's hip. Well, a sort of a hip replacement.

Talking of contemporary, Rachel Crow, the 13-year-old who is desperate for her own bathroom and a large TV, performed "Walking on Sunshine." For some reason, the words were changed to "You're My Sunshine", possibly because Crow did no walking whatsoever.

It's hard not to see Crow a little like a pageant queen being pushed out on stage just a couple of years too soon. However, she can sing.

"You must be one of the most charismatic people I've ever met," purred Reid, with yet more number-three hype. "It's tough to criticize you as a performer because you're so lovable," he added, obviously keeping his criticisms to himself.

Scherzinger, not wanting to be out-hyped, compared Crow to Michael Jackson.

One feared that Abdul could only compete by comparing her to Jesse Jackson or even Jackson Pollock. Instead, she merely criticized the song choice. The conflict is part of the (scripted) fun.

Reid feared this would be corny. There is not a podiatrist in America who could cope with these corns. The song was Fleetwood Mac's "Landslide." And so it was, all the way down the mountain to a rocky end.

They didn't really seem to be, um, singing entirely live either. It just felt like there were more than four voices out there.

"You look incredible tonight," gushed Reid. He worried, though, that they were neither pop nor country.

"I absolutely hate what you're wearing," barked Cowell. "The idea of turning you into four seasons is literally insane."

Suddenly a real, sane singer turned up. Josh Krajcik was given a girl's song by his mentor, Scherinzger. Christina Perri's "Jar of Hearts" is, in Scherzinger's words, a "fragile song." Krajcik gave it strength. On the other hand, whoever chose his wardrobe gave him a leather (or plastic) jacket that restricted his bodily movement. Fortunately, Krajcik only needs his eyes and mouth.

"I'm a believer because you nail everything," said Abdul.

"That was incredible," added Cowell. It's all relative on a show like this. But Krajcik represents everything that shows like this often don't. He injects feeling where most inject collagen.

Scherzinger, naturally, wept. Who does she think she is? Carrie Ann Inaba?

Krajcik's greatest competition is, perhaps, Melanie Amaro, whom Cowell allegedly made a mistake about by dismissing her after she sang by his French pool. It was all a set-up, of course.

Cowell, again reaching into his contemporary music library, gave her The Eagles' "Desperado." She sang it perfectly. And, goodness, did hair and makeup get hold of her and work desperately hard.

Reid was beginning to sound like, dare one utter it, Randy Jackson. He praised Amaro unreservedly. So did the other judges.

"You are the one to beat," said Cowell.

Astro, the overly confident child rapper, only utters his own lyrics. This is a world far beyond Cowell's, who repurposes, re-markets and recycles.

Astro, when he stops talking, is quite charming. His channeling of Missy Elliot and Naughty by Nature was just populist enough, but also just credible enough to hope for a few votes. It was certainly highly polished and highly involving.

Who is watching this show, though? Even more importantly, who will be voting?

"L.A. is channeling his ego through you," was Cowell's verdict. "Brooklyn and America loves you," smoothed Reid.

The last group was "Glee"-redux band Intensity. Cowell worried that Abdul was mentoring them badly. So as not to make them seem like just another bunch of American high school kids, Abdul had them sing "Kids in America."

The vocals largely rebelled from anything tuneful. High school this was. Gleeful this wasn't.

Drew Ryniewicz - now known as "Drew" because it is feared America can't manage "Rynjevich" - was going to be, according to Cowell, "cooler" and "younger." Drew's "Just a Dream" - borrowed from Nelly for the evening - was just a little too slick. Which means the judges loved it.

"You have the spirit of a superstar," said Reid. Scherzinger declared her "relevant" and "so unique."

In this fickle world, being merely unique just isn't enough. Marcus Canty was supposed to sing and dance like Bobby Brown. Cowell worried that we didn't need another Bobby Brown. With a dozen dancers helping him along the way, Canty seemed entirely generic, a package looking for a box.

The judges, would you believe, loved it. Scherzinger felt as if she was at a concert, rather than a competition. Cowell thought he had come alive.

Stacy Francis has taken quite some criticism, since she claimed that a bad relationship had held her back from pursuing her dreams. As it turned out, she's sung for Tom Cruise, been produced by R. Kelly and starred in Broadway musicals.

Worse, Cowell had referred to her last week as a church singer. Well, better that than a church mouse.

Francis took Patty Griffin's "Up To The Mountain", a rather churchy song and, with the help of a very nice gospel choir, marched it up to the altar and let it genuflect.

The question again, though, is who will be voting? Who will be tweeting? Who, in fact, is watching this show? With "American Idol", we know the voters are 6-year-old girls in sweet, pink nighties.

Who will have reached for their cell phones in order to make this the show that reaches for the future, rather than another vehicle that reeks of the past?

The hologram that is Jones uttered the most telling words at the very end: "You can vote as often as you like."