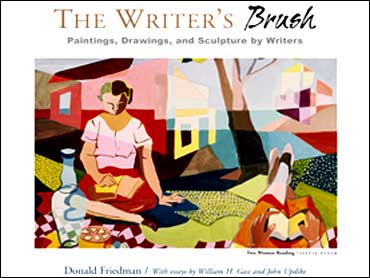 The surprise isn't that there are writers who paint, it's how many writers paint.

Would you believe Aldous Huxley, the author of "Brave New World"; the Irish poet, William Butler Yeats; and playwright Tennessee Williams who actually sold his paintings.

Donald Friedman is a lawyer-turned-writer who recently put together the most comprehensive exhibition ever of paintings by writers. He's also just published a book called "The Writer's Brush."

"What we have here is the work of five Nobel laureates, five United States poet laureates, and more Pulitzer Prize-winning and National Book Award-winning writers than I could count," he told Martha Teichner.

"They found enormous pleasure in the act of painting and distinguished it very much from writing," Friedman said. "Kurt Vonnegut made a comment which was that, "As any writer knows, the real pleasure in writing comes when the moment, when you can get rid of the manuscript, just get it out of your life, whereas painting is a continuing pleasure in the process of doing it,'"

The whacked-out sense of humor evident in Vonnegut's books, like "Slaughterhouse Five," can be seen in his painting. In a videotape Friedman made of the writer/painter in October 2000, Vonnegutsaid, "I'm not an artist, you know, but I also recommend that people practice art, no matter how badly because it's known to make a soul grow."

She lives on an island off the coast of Maine. Often, she paints the same scenes, near her home, over and over.

"Sometimes when I'm feeling a little burnt out with writing, it's a pleasure," Minot said. "You know it's never something i feel, 'Oh, I better go do that,' which is what writing sometimes has become, because it's what I'm supposed to be doing."

Like many artist/writers, Minot studied painting seriously and wanted to paint, but needed to write, though she finds one influences the other.

"I might describe a scene in a painterly way, but that's because I like to paint. I'm very visually oriented."

She's almost superstitious about sharing her writing with people until it's published. But because painting is more like playing to her, Minot is comfortable showing off the piles of playing card-sized notebooks she's filled over the years.

"They are like visual diaries," she said. "Here is a writer's world through painter's eyes."

As a poet who paints, Derek Walcott found himself in good company at the Anita Shapolsky Gallery in New York City. There was two-time National Book Award-winner William Jay Smith. Likewise the so-called "Beats." You'd expect something a little more radical from Jack Kerouac, after "On the Road."

There are paintings by Allen Ginsberg, who wrote the famous epic poem "Howl," and Lawrence Ferlinghetti, who said, "Painting is poetry. Poetry is painting."

His painting, "Freud," is the likeness of a man, but looked at another way, is a woman.

Ferlinghetti, 88 years old now, is still worshipped by baby boomers for his 1958 book, "A Coney Island of the Mind." But he spends as much time painting as he does writing.

"I can get higher [satisfaction] from a painting that from a poem."

It annoys Ferlinghetti that people seem amazed he does both.

"That's a very American thing. In this country you're pigeonholed, like I was. First became known as a poet, so now, 'Oh, he couldn't be a serious painter, too. It must be just something he does on Sunday.'"

Does he consider himself a poet first and a painter second?

"Both.at once," he said. "It's just a different medium. It's all the same urge, the same expression, the same message. Some day, it might come out graphically, another day, it'll come out in words."

Ferlinghetti's famous City Lights bookstore and publishing house in San Francisco, is dedicated, as his poetry and his painting are, to freedom of expression.

"The Tiger," by Jorge Luis Borges, the great Argentine writer and painter who went blind, is one of Donald Friedman's favorite pictures in his exploration of writers who paint.

"In an essay on blindness [Borges] talked about how one of the few colors that remained to him as he was going blind was yellow."

After looking at hundreds of different examples, Friedman concluded that writers paint for as many different reasons as they write, but he found this common denominator: They all have so much creativity no one medium can contain it.