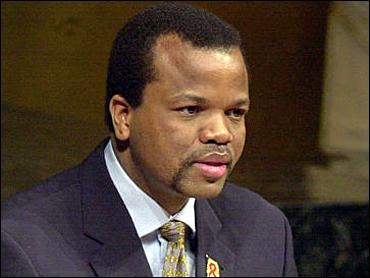 Length of rule: 24 years. One of the world's last absolute monarchs, Mswati III took the throne in 1986. The House of Dlamini, the formal name for the Swazi royal family, has ruled the Kingdom of Swaziland since its inception in the early 1800s, and has faced very little opposition to its hegemony over the tiny, landlocked and poverty-plagued country.

Most despotic acts: Mswati III has avoided accusations of violent repression and extra-judicial killings, in large part because of the lack of much political opposition, but his retinue of 14 wives was built by marrying many underage girls, sometimes chosen by the king on whims. His most heinous act appears to be living an opulent lifestyle "fit for a king" while his country languishes in extreme poverty. A 2008 documentary on the life of Mswati III portrayed the country's dilemma as a choice "between tradition and survival...there are mutterings against the royal family and hints of civil war. Yet the film, fluidly shot by James Adolphus, remains deeply sensitive to the complexities of a culture whose attachment to monarchy contravenes its best interests," wrote The New York Times in a review.

Outlook for change: The Times of India reported on March 19: "King Mswati III has a Rolls Royce, 13 palaces and 14 wives, and just received a pay increase, even as a cash crisis forced Swaziland to slash spending, feeding anger against his regime. The government has frozen state wages and imposed higher taxes to fight the country's worst-ever fiscal crisis. Thousands of Swazis marched on the prime minister's office on Friday to demand the resignation of the government." It appears, however, that protesters are not demanding their king step down. The Associated Press wrote recently that when "asked about reports that the U.S. has developed a road map to democracy for the southern African country, (Prime Minister) Sibusiso Barnabas Dlamini told newspaper editors that 'we would wish to emphasize that the way our country is governed has been and continues to be determined by Swazis.'"

Constitution and the Rule of Law: Monarchy; Everyday law based on South African Roman-Dutch law in statutory courts and Swazi traditional law and custom in traditional courts.