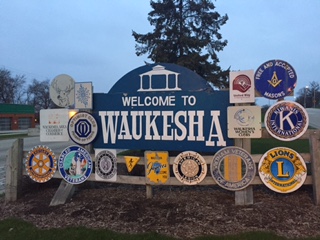 Waukesha, WISCONSINWill there be a contested Republican convention? That might all depend on how Waukesha County, Wisconsin votes Tuesday night.

After the first full week of 2016 without a debate or primary contest, voters head to the polls here Tuesday. And Waukesha County, which is just outside Milwaukee in GOP voter-rich southeastern Wisconsin, will play a major role in who wins this primary, where 42 delegates are at stake.

The third largest county in the state, Waukesha is considered the central stronghold for Republicans in Wisconsin. No candidate in the last twenty years has won the primary without carrying the county.

"Where Waukesha goes, so does the rest of the Republican party -- most of the time," GOP State Senate Majority Leader Scott Fitzgerald told a Milwaukee Journal Sentinel in the lead up to the state's 2012 Republican primary.

And unless GOP front-runner Donald Trump wins Wisconsin, a contested contention becomes more likely, making it harder for him to win the 1,237 delegates necessary to clinch the nomination before the primaries end on June 7.

"People who look at Wisconsin politics understand that the important nature of Waukesha county," Charles Franklin, Director of the Marquette University Law School's polling unit. Waukesha, he added, is one of the "reddest counties ... and they turn out an enormous percentage of their vote".

The county is famous enough so that references to "crucial Waukesha County" are something of an in-joke among political reporters on social media. The joke dates back to two 2011 contests that Democrats thought they'd won -- until the votes in Waukesha were counted.

The latest CBS News battleground tracker in Wisconsin shows Cruz leading Trump 43 percent to 37 percent, which indicates that Ted Cruz could deny Trump all but a handful of delegates here. And with no Republican primaries on the calendar for the next two weeks, that might represent a shift in momentum for Cruz.

Cruz is on track for a good night. The GOP primary, Franklin explains, can be broken down geographically between the more urban southeast, where Waukesha is located, and more rural northern and western parts of the state.

"Cruz is consolidating support in the southeast ... and is [now] running even with Trump in the northwest, which vastly help Cruz's chance of picking up delegates from that area of the state," Franklin explained.

At the same time, Trump faces a particular set of demographic headwinds in Wisconsin. As the New York Times wrote on Monday, the state's population is well-educated, while the lack of a high school education has been a leading indicator of Trump support. Wisconsin is also a bit more religious than the national average, and has a high marriage rate, which could prove problematic for the New York billionaire.

"The most religious states aren't usually highly educated, and many have lower marriage rates," the Times notes. "Where these factors do converge, though, Mr. Trump struggles, as he did in Utah, Kansas and Iowa."

Waukesha mirrors these trends. About 96 percent of its residents have at least a high school degree, according to U.S. census data, and some 60 percent of the population is married, and about the same percentage are religious. The county is also relatively affluent -- unemployment is low, and the median annual household income is roughly $76,000 (compared with the national median household income of around $54,000) -- whereas Trump tends to perform strongest in working-class communities.

All of this makes it hard to read too much into what a Cruz victory in Wisconsin means. The primary map, after all, soon turns to East Coast states where Trump is expected to do well. But should Cruz pull out a win here, expect for him to celebrate the victory as a game-changer, if only because it makes it harder for Trump to avoid a contested convention. And should such a victory materialize, the Texas senator will likely have a lot of voters in Waukesha to thank.

"Wisconsin is a battleground. Wisconsin is on the national stage, the entire country is looking to this state," Cruz said in speech on Sunday.