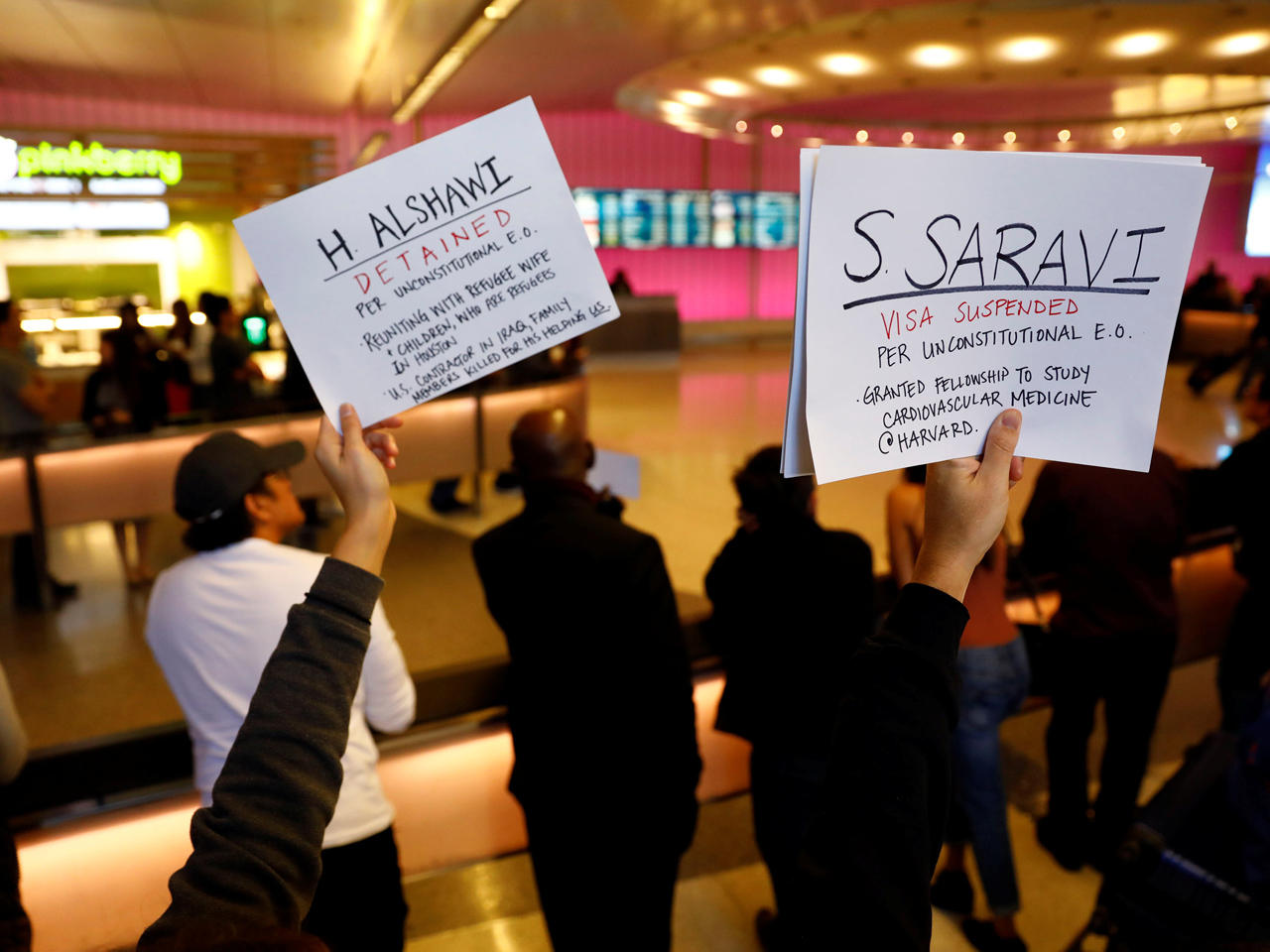 The White House held a hastily-arranged conference call with reporters Sunday evening to explain the president’s “extreme vetting” executive order issued Friday, after visa holders from countries included in the order were detained at U.S. airports this weekend.

The new restrictions do not apply to green card holders -- or legal permanent residents -- from the seven countries covered by the order, a senior administration official said.

“Legal permanent residents are exempt from the executive order because it is in the national interest of the United States,” the official told reporters.

Green card holders may be subject to additional screening but can continue traveling between the U.S. and their home countries freely, as long as no “derogatory information” is uncovered in the screening process.

According to U.S. officials, at least 348 people were told by their airlines that they were not allowed to board their flights to the U.S. as a result of the executive order. Officials told CBS News that there were also 394 legal permanent residents, or green card holders, who arrived at airports. Of that group, 392 people were admitted to the U.S. For the two that were denied entry, one walked back across the Canadian border and the other was arrested on an outstanding criminal charge.

After the executive order was issued, over the weekend, the Pentagon “was given the opportunity by the White House” to provide a list of names of Iraqi translators, drivers and others who had supported American forces past and present, according to Pentagon spokesman Capt. Jeff Davis. He would not say, however, whether Defense Secretary James Mattis was aware of the contents of the executive irder before it was released and would not say whether the Pentagon had initiated the request to provide the list of Iraqis.

Sen. John McCain, R-Arizona, had raised the issue of Iraqi pilots training in Arizona and Davis said the Pentagon is looking into that but thought they were in the U.S. on a special type of visa.

As for non U.S. citizens serving in the military, Davis said that there are roughly 18,700 Green Card holders serving in the U.S. military, but only a small fraction of them are from the seven countries affected by the ban.

On Saturday night, a federal judge issued an emergency order temporarily barring the U.S. from deporting people from nations subject to Mr. Trump’s travel ban, saying travelers who had been detained had a strong argument that their legal rights had been violated. The White House argued the judges’ decision applied only to the people detained Saturday at U.S. airports.

The White House claims that issuing waivers for legal permanent residents was always how its program was intended to work. The senior administration official complained that the media and protesters are overreacting to a very small percentage of entrants impacted by the new policy.

“[E]very false, misleading, inaccurate, hyperventilating, confused, misguided or other kind of report, again covers a fractional, miniscule percentage of travelers to our airports on any given day,” the official said to reporters on the call, dismissing the detention of the travelers at airports across the country over the weekend as an “extremely minimal disruption.”

According to the senior Trump administration official, the executive order was drafted by immigration staffers on Capitol Hill during the transition and refined over the last several weeks.

Before the order was signed Friday by the president, the senior administration official said the Justice Department’s Office of Legal Council signed off on the executive order. And it also underwent review by the National Security Council, Homeland Security Council. Senior staff at DHS were also briefed.

The White House stressed the U.S. is under no obligation to admit foreign nationals from any country and called previous screening procedures “woefully inadequate.”

Removal from the banned list will -- according to the official -- depend on the ability of countries to comply with the Trump administration’s requests for information. Within 30 days, the administration will lay out “what we expect countries who participate in our immigration programs be able to provide about their nationals,” the official said.

After that, countries will be have 60 days to comply with the updated requirements.