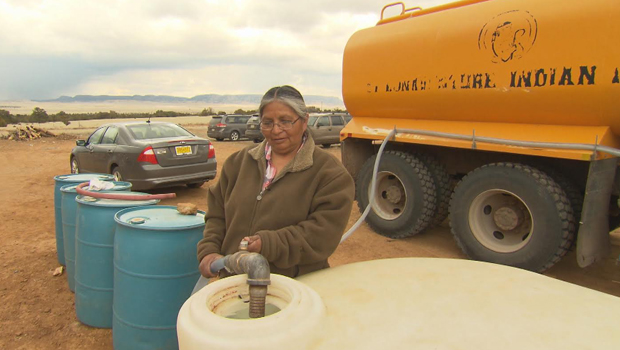 "Water, water everywhere ..." A popular saying, without a drop of truth for some folks in one beautiful part of our country. Lee Cowan saw firsthand how they struggle to get by when he traveled there for our Sunday Morning Cover Story:

It's easy to miss this corner of the Navajo Nation, just 100 miles west of Albuquerque. Most things pass the Reservation right by, including progress.

Many of the roads here are unpaved. Electricity is spotty. Unemployment in the area hovers near 70 percent.

But perhaps most shocking of all? An estimated 40 percent of the people who live here don't have access to running water.

"We don't use the sink because there's no running water," said Loretta Smith.

Smith and her husband share a small mobile home with their disabled seven-year-old granddaughter, Brianna.

With no indoor plumbing, what little water the family has inside is carried in, bucket by bucket, stored in plastic barrels outside.

Cowan asked, "Do you feel sort of forgotten out here?"

The area's main source of drinking water is miles away, in the parking lot of the St. Bonaventure Indian Mission, in the town of Thoreau, New Mexico.

Getting water here can mean a 100-mile round trip for some families, and the Mission's office manager, Cindy Howe, says many don't even have access to a car.

She said it has always been that way here. "Sometimes I get so frustrated. Why is it? Why can't people get water?"

And that's when Darlene Arviso comes in. They call her the "Water Lady."

Every day Arviso loads up her big yellow tanker truck and takes to the roads to deliver something most of us take for granted.

Arviso is Navajo, born and raised right here on the Reservation. She pretty much knows everyone here.

She's used to carrying precious cargo; she's been driving the school bus on the Reservation for years.

But her water route is a job she considers almost sacred.

"What do you love about it so much?"

"I go out every day to meet different families," she said.

There are 250 homes on her route, and she can only get to each family once a month -- and sometimes not even then, if the mud gets too thick.

Which is why when she DOES make it, it's often treated like a celebration.

Nina Garcia has never had a day with running water in her life. Unlike the rest of us, who use about 100 gallons of water a day, Nina has been getting by on only about seven -- a hard truth Arviso has a hard time watching.

"Sometimes I wish I could do more," she told Cowan.

"How do they make it last so long?

"Well, they just have to stretch out their water,"

"I say this, you know, having been raised Catholic with full knowledge of what I'm saying -- Darlene Arviso is a living saint," said George McGraw, who runs a non-profit called DigDeep.

The fact that McGraw is on the Reservation at all is a testament to just how dire the Navajo situation is. He normally works in developing countries -- digging wells in places like South Sudan, Kashmir and Cameroon.

But now the problem is right in his backyard. "I really had no concept that this kind of material poverty existed in the U.S.," he said.

But it does. The question is, why?

Cowan took that question to Dan McCool, a political science professor at the University of Utah, who has studied Indian water rights for the last 40 years.

"It should be regarded as a national embarrassment," he said of the water situation.

"How is this possible in this day and age that Americans don't have running water?" Cowan asked.

"American Indians in Arizona and New Mexico were not allowed to vote until 1948," McCool said. "They did not have a voice. They weren't in line politically when the money, the funding, the projects and the water [were] being allocated."

So the only source of water left for the Navajo is groundwater, lying deep beneath the hard rock of the Continental Divide.

"We took this project to hydrogeologists, to engineers, to construction specialists all over the country, even here in the Southwest," said McGraw. "And everyone said, 'Well, this is one of the most challenging projects we've ever seen.'"

Even if they can find water, it might not be drinkable.

"You'd probably start to hit water here at about 600 feet, but the water you'd get out would be laced with uranium."

That's from years of mining on the reservation during World War II.

Sarah Begay, who's lived on the reservation all her life, took Cowan to one. It's still pumping water, but few dare drink from it anymore.

Begay said that for about 20-30 years it was fine, but then people started getting sick.

So DigDeep must dig deeper -- and the clock is ticking.

"Running out of water by the middle of the month is a painful experience," said George McGraw. "Most of them still do."

Lindsay Johnson makes sure she doesn't run out. She has a system to conserve every drop Arviso delivers.

"What would you do without her?" Cowan asked.

Aside from her morning coffee mug, she uses only paper plates and cups so she doesn't have to wash dishes.

Like her fellow Navajos, Lindsay shares her home with as many as eight other people.

When it comes to washing hair, two, maybe three of them will all use the same water.

Lindsay's 16-year-old granddaughter, Yvonne, says almost everyone here finds ways to cope without running water, but few want to talk about it.

"People don't share their stories," she said. "I don't either. It's kind of embarrassing. It's just hard."

So, Cowan asked, who's to blame for this situation?

"So a lot of finger-pointing," said Cowan.

"Oh yeah, and a lot of passing the buck."

And so, the Navajo wait.

George McGraw's DigDeep well is coming along, but it will cost close to $500,000 to complete -- all of it funded by donations.

But even if the well gets up and pumping, Darlene Arviso still won't be out of a job. A new well doesn't mean homes will suddenly have new plumbing.

What it means is clean water will be more readily accessible -- a first step. The next will be building gravity-fed storage tanks that could be hooked up to faucets inside.

But that's several years -- and probably countless fundraisers -- away.

"Things are not simple here," said McGraw. "But every time we have even the smallest success in this project, those little moments are so tremendously impactful to me. I think I'm really starting to live for this project. It's ours."

"Do you think you'll ever see a day where everyone here has water?" asked Cowan.

"I just hope so!" Arviso laughed. "I just pray that they'll have running water, yeah."

A simple wish the Navajo people hope won't just be drop in an already-empty bucket.

Peggy Lee and her cool power