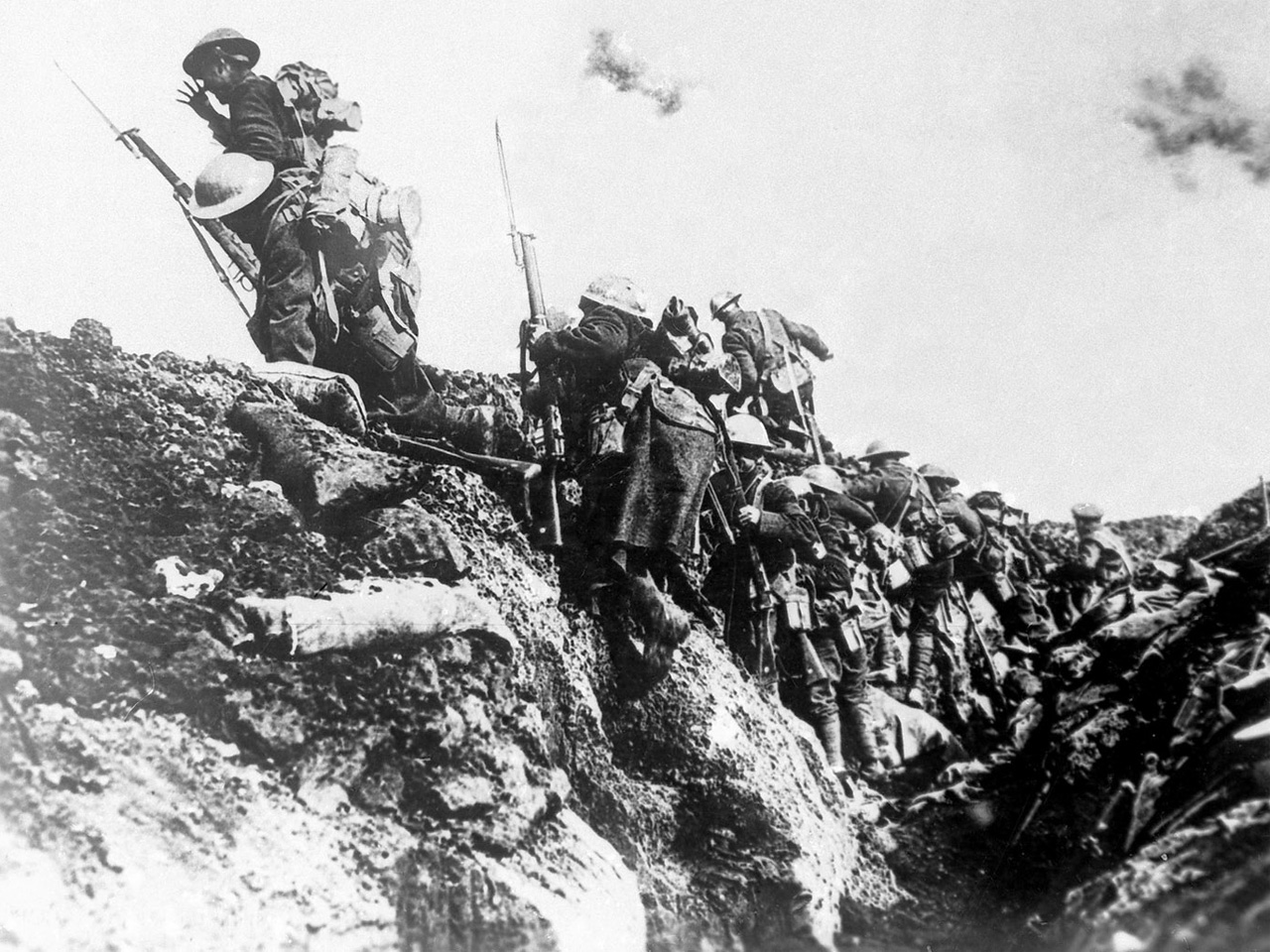 Nearly a century ago, Corporal Martin Berger, from the Bronx, N.Y., went into battle in France. He was one of the lucky ones who came home from "the Great War." Martha Teichner looks back at what was supposed to be "the war to end all wars":

True story: On Sept. 7, 1914, exactly 100 years ago today, 600 taxis, commandeered from the streets of Paris, shuttled 6,000 reinforcements to the battlefield -- soldiers who, by many accounts, made all the difference. The French and British defeated the Germans at the First Battle of the Marne.

Two million men fought each other there. In just a week of battle, there were an estimated half a million dead and wounded.

World War I was barely a month old, but already the kind of war it would be was becoming evident.

"In absolute numbers, this war defies previous understandings of war, and then defines future expectations of war," said Oxford professor Sir Hew Strachan, one of the world's most noted WWI scholars.


"The lesson from this war still is that what we want to do is try and avoid war," said Strachan. "And the sense of the loss of life that comes from it derives precisely from 1914-18.

It began with an isolated act of terrorism. On June 28, 1914, in the Bosnian capital of Sarajevo, the heir apparent to the Austro-Hungarian throne, Archduke Franz Ferdinand, and his wife, were shot by a Serbian nationalist.

How did the assassination of an obscure archduke lead to a world war?

Strachan said it was a system of collective security in place, "which makes it very hard for any one state to stand back without compromising its own security."

Germany had its own agenda -- it wanted to invade France, but getting there meant invading Belgium, too. So Britain -- committed to supporting Belgium, France and Russia -- declared war on Germany.

And that, Strachan said, produced a snowball effect: "It becomes a world war because many of these powers are colonial powers as well as being European powers."

Like dominoes, country after country was dragged in -- on the side of the Allies, or the Central Powers -- until practically the whole world was at war.

But not the United States, which remained neutral . . . at first.

"The reflex response of most people, and indeed of the president himself, Woodrow Wilson, was essentially to say, 'Thank God that our ancestors left that wretched, old continent and got out of the way of this kind of catastrophe," said Pulitzer Prize-winning historian David Kennedy of Stanford University.

"People all responded to the news of the war's outbreak much in line with the, by then, century-plus-old tradition of isolationism."


"He kept us out of war" was the campaign slogan largely credited with getting President Woodrow Wilson re-elected in 1916.

But just a few months later, after multiple provocations, Wilson asked Congress to go to war with Germany. On April 6, 1917, the declaration came -- and with it, a propaganda war, a battle for the hearts and minds of the American people.

"It's about the shift from saying that this is really not our war, to them being willing to put their shoulder to the wheel," said Matthew Naylor, head of the National World War I Museum in Kansas City, Mo.

"Modern public relations was very much formed by these early experiments in persuading people to a particular point of view or action," he said.

Demonizing the enemy was part of the message. But that raised the question: Who was the enemy? The loyalty of so-called "hyphenated-Americans" became an issue.

"We were a country, roughly, of 90 million people at this point," said Kennedy. "More than 30 million Americans at that time were either foreign-born or had at least one parent who was born abroad. And of those 30 million people, about a third of them -- 11, 12 million -- came from Austria-Hungary or Germany."

The U.S. had no army to speak of when war was declared. A draft was imposed. Enlistment was sold as an act of moral right.

"The Peacemaker" by Joyce Kilmer:

Upon his will he binds a radiant chain,
For Freedom's sake he is no longer free.
It is his task, the slave of Liberty,
With his own blood to wipe away a stain.
That pain may cease, he yields his flesh to pain.
To banish war, he must a warrior be.

"There are many of us who would not have made the choice that he did, but he was brave enough to do what he believed was right," said Miriam Kilmer, Joyce's granddaughter.

We know him for this: "I think that I should never see a poem lovely as a tree." But he was a WWI poet.

Kilmer enlisted, leaving behind a wife and four small children. He wrote "The Peacemaker" in France, from the battlefield.

Joyce Kilmer was sent to the Western front, a line of trenches more than 400 miles long, from the Belgian coast to Switzerland.

Imagine: Both sides dug in, no-man's-land between them. The barbed wire, the filth, the stench. Nightmare gas attacks. And then, in 1916, the first tanks -- technology that modernized warfare but failed to end a three-year stalemate.

"There was a resignation in a sense," said Naylor. "If we all just sort of don't be firing at one another, we're all going to live longer. The United States entered the war, and things changed dramatically."

More than two million American soldiers fought in France during World War I, Joyce Kilmer among them. He was on a reconnaissance mission when he died on July 30, 1918 -- shot through the head by a sniper.

"He was lying on the ground," said his grandson, Robert Kilmer, "facing forward toward the enemy. And they thought he was alive. They went to announce themselves. His patrol went to say, 'Okay, Joyce, let's go,' then they found him dead."

Joyce Kilmer is buried in France, surrounded by the graves of other American soldiers killed in WWI.

Another poet wrote, "In Flanders Fields the poppies blow, between the crosses row on row."

The poppy has come to symbolize the soldiers on all sides who died -- some 8.5 million of them. More than 116,000 of those dead were American.

With Germany's surrender, in 1918, the map was redrawn. The Middle East, sliced and diced into territories being fought over to this day.


President Woodrow Wilson, who thrust the United States onto the world stage to make it "safe for democracy," failed.

Kennedy said a "deep disillusionment" set in. "And it deepens as the '20s and '30s go forward, when the American public looks across the Atlantic at the Europe they thought they were being sent into battle to redeem, and what do they get? They get fascism in Italy. They get Communism in Russia. They get Nazism in Germany."

Was it all a terrible waste? When it ended, World War I was known as "the War to End All Wars." Barely two decades later, World War II began.