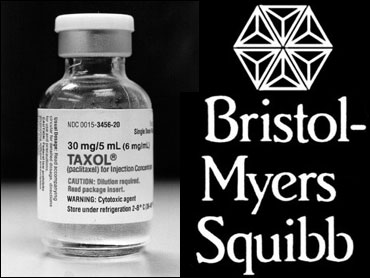 The lawsuit, spearheaded by Ohio, was filed in U.S. District Court for the District of Columbia and charges Bristol-Myers with unfairly profiting from its monopoly over the cancer drug and depriving U.S. consumers of less expensive versions of the treatment, used primarily for ovarian and breast cancers.

"I find it particularly distasteful that Bristol is illegally profiting from a drug which only exists because taxpayers paid for its development in the first place. That's double-dipping at its worst," said Michigan Attorney General Jennifer Granholm, one of the lawyers involved with the suit.

The active ingredient in Taxol was developed by the National Cancer Institute and rights were then granted to Bristol-Myers.

The lawsuit alleges that cancer patients and health care providers were forced to pay significantly higher prices for Taxol even after Bristol-Myers' original U.S. patent protection expired. The states are seeking injunctive relief and monetary damages.

Bristol-Myers was not immediately able to comment on the matter.

The suit is the latest blow for embattled Bristol-Myers, already suffering from stiff generic competition on its other key drugs and a failure so far to bring new cancer drug Erbitux to market after a $2 billion investment in Erbitux's developer, ImClone Systems Inc.

Generic forms of the drug were approved by U.S. regulators in Sept. 2000 after protracted litigation between generic drugmaker IVAX Corp. and Bristol-Myers.

Since then, the drug, known chemically as paclitaxel, has experienced a sharp price decline, and Bristol-Myers has seen sales slump. Bristol-Myers' sales of the drug have totaled at least $5.4 billion since 1998, the state of Michigan said.

Michigan estimated that hospitals, cancer patients and states were forced to pay roughly 33 percent more for Taxol than they would have been spent if copycats had been available. The state said its Medicaid program for the poor has paid about $4 million for paclitaxel since 1997.

The suit mirrors one filed late last year that accused Bristol-Myers of illegally preventing generic forms of anti-anxiety drug BuSpar from hitting the market. The company reaped more than $700 million from the drug in 2000, but generics were finally permitted on the U.S. market in late March 2001, decimating Bristol-Myers' sales of the drug.

Shares of Bristol-Myers were trading down $1.13, or about 4 percent, at $28.70 in afternoon trade on the New York Stock Exchange.