It's not some feel-good, Friday night date-movie or some big-budget popcorn thriller. In fact, "Precious," at times, is so hard to watch, you can't look away.

Gabourey "Gabby" Sidibe stars as Clareece Precious Jones, an obese, illiterate black teenager from Harlem. She is pregnant for the second time by her father and physically and verbally abused by her mother, but she still dares to dream of a better life. CBS Evening News anchor Katie Couric talked to the people behind the film.

Now that "Precious" has plucked her from virtual obscurity, Sidibe, 26, says the world's sudden interest in her takes some getting used to.

"Everytime I'm in the airport, the people are like 'Oh my God, you're that girl that's almost famous. You're about to be famous,'" Sidibe said.

The movie's journey to the big screen is as unusual and unlikely as Sidibe's.

In 1996, a former teacher turned poet who calls herself Sapphire wrote the novel "Push," based on memories of teaching literacy to Harlem teenagers in the 1980s.

During that time she met a 32-year-old woman who told her she had to arrange for a babysitter for her mentally-impaired daughter who was 20 years old. (The woman had been impregnated by her father when she was 12.) The character of Precious is loosely based on that woman.

"It's not a rags-to-riches story. It's not 'The Biggest Loser.' She doesn't lose 100 pounds and find a boyfriend," Sapphire said. "We watch small changes affect her life."

Daniels grew up in south Philadelphia, where he saw people like Precious every day on the street, in the 'hood and in the mirror.

"Growing up gay in the projects, in the ghetto, is hard. It's hard enough growing up there. But growing up as an outsider in that environment is terrifying," he said.

Daniels had already produced the critically-acclaimed "Monster's Ball" when he began to pursue Sapphire for the film rights to "Push." But it wasn't easy. Sapphire felt turning her novel into a movie would mean the exploitation of overweight black women. She said no.

But once she saw Daniels' directorial debut, "Shadowboxer," an unconventional movie about a female assassin diagnosed with cancer, she gave in.

"I just thought this is someone who is willing to take a risk," Sapphire said, "and at the same time, is a real artist."

Daniels canvassed the country, auditioning more than 400 girls, to find an actor who could handle the harrowing lead role. He found her at Lehman College in the Bronx. 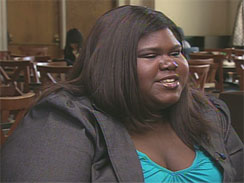 (CBS)
Sidibe was studying psychology at City College in New York at the time, but had performed in productions at Lehman. She never imagined she would end up acting for a living.

"A girl like me, there's no way," Sidibe said. "Just because I don't look like most actresses do. And I never thought I could. And I didn't want to."

But she cut class and went to the audition anyway.

Some critics have charged that "Precious" does little to challenge stereotypes. But once Sapphire watched the movie with a nearly-all-white audience she says she realized its theme was universal.

"They gave us a standing ovation. And then a white woman in the back stood up and she said, 'I'm 60 years old. And this is my story,'" Sapphire said.

The movie has two other very influential fans. Oprah Winfrey and Tyler Perry signed on as executive producers, which may make an art house film into a commercial success.

As Gabby Sidibe adjusts to life walking red carpets, she says she's mindful of who the movie is dedicated to: precious girls everywhere just like her.

"Ultimately, I hope it means that people will not count me out because of my size," she said. "I just hope that people can get past what I look like, and what other people look like, and see the heart and the soul of the person."