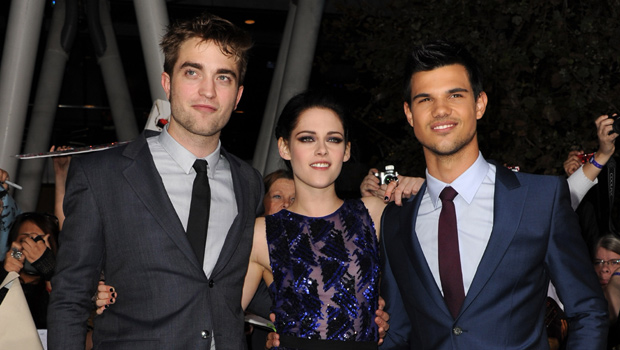 (CBS) Robert Pattinson, Kristen Stewart and Taylor Lautner were greeted by thousands of screaming Twi-hards Monday night as they walked down the black carpet at the Los Angeles premiere of "The Twilight Saga: Breaking Dawn - Part 1."

Some of those Twi-hards were lucky enough to score tickets to see the film at the premiere and brought their screaming indoors. According to the Wall Street Journal they cheered as Lautner's character Jacob Black whipped off his shirt, which was of course within the first five minutes of the film. The fans also nearly lost their minds, according to the paper, as Edward Cullen and Bella Swan sealed their vows and consummated their relationship on their honeymoon.

"Lots of milestones are crammed into this one and there's a very accelerated bit of life lived in this movie," Stewart told Reuters of the film's plot, which includes a wedding and even pregnancy.

"Twilight" fanshadbeen camping out outside the Nokia Theatre in anticipation of Monday's premiere since Thursday with hopes of catching glimpses of the film's stars.

The movie opens nationally Nov. 18 and of course serious "Twilight" fans have already bought their tickets in advance.

"Breaking Dawn - Part 1" is the first part of the end of the "Twilight" movies series. The second part will reach theaters in the summer of 2012.