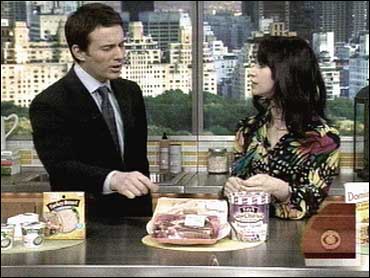 On average, a family of four throws out more than 120 pounds of food each month.

But plenty of perishables have a shelf life long beyond their "sell-by" dates.

So, just how strictly should you adhere to expiration dates?

On The Early Show Saturday Edition, Rebekah George, an editor at Prevention magazine, offered tips on when you really have to toss that food.

MOST THINGS WILL LAST A LOT LONGER, RIGHT? HOW ARE THOSE DATES DETERMINED?

They always leave room for error, because people won't always abide by the sell-by date.

MILK CAN BE SAFELY USED UP TO A WEEK PAST THE SELL-BY DATE?

Yes, it can, if you keep in mind that your fridge has to remain at 40-degrees Fahrenheit, or below, at all times. Make the milk the last thing you pick up before you hit the store's checkout, to minimize the time it's left un-refrigerated, which can exacerbate the spoilage; then, store it at the very back of the shelf, where the air tends to be colder.

EGGS WILL LAST THREE TO FOUR WEEKS PAST THEIR SELL-BY DATE?

You have to refrigerate them to rule out any safety concerns. Be sure to store them in their original container on a refrigerator shelf, rather than on the door, where the eggs will be more vulnerable to fluctuations in temperature because it's constantly opened and closed.

They can last a little longer because they contain less moisture than soft cheeses. If you wrap the cheese in moisture-proof plastic or foil, it will last longer. If the outside forms a visible mold, just trim the mold and a 1/2 inch area of the cheese below it.

Yogurt will last 10 days to two weeks beyond the sell-by date, if it's stored at around 39 degrees Fahrenheit, which is right at the appropriate temperature for your fridge. And don't worry if it separates; just stir it up and dig in. The separation is called whey, and that's a good sign, because it shows that the beneficial cultures are alive and working. But toss if it has any visible mold or a bad odor.

LUNCH MEAT WILL STAY GOOD FOR THREE TO FIVE DAYS PAST THE SELL-BY DATE?

Yes, if it's sealed. But be sure to store it in the meat compartment, which is specially designed to keep the cool air in, and it will keep your meat fresher. Packaged meat doesn't start to deteriorate until it's opened. Just eyeball it before you consume it. if it has a yucky, green, slimy film, get rid of it!

IF YOU KEEP SOMETHING IN THE FREEZER, WILL IT STAY EDIBLE FOREVER, OR IS THAT JUST A MYTH?

Not forever, but for a pretty long time, if your freezer is set at zero degrees. But for every five degree increase in temperature, cut the storage time in half. And though foods will stay edible, the texture and flavor will diminish with time. And freezing doesn't kill the bacteria, so remember to cook it thoroughly, and follow the fridge rules when you take out.

HOW LONG CAN RAW MEAT BE KEPT IN THE FREEZER?

You can keep ice cream for up to two-to-four months.

FOODS YOU KEEP IN YOUR PANTRY OR CLOSET OFTEN DON'T COME WITH SELL-BY DATES.

But it doesn't mean they'll last forever, and a lot depends on whether they're open or not. For example, oils will last unopened for about six months; opened, for half that time. Ground herbs and spices will last for six months; whole spices, for two years.

They'll last for about a year in the closet, then you should think about tossing it.

Canned goods will last, unopened, for between two and five years.