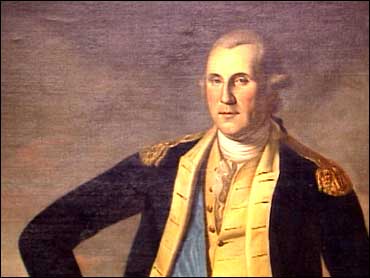 At Washington's home Mount Vernon, Va., you'll discover just about everything you thought you knew about our first president is wrong.

The first thing you probably didn't know about Washington is his unconventional choice for a retirement job. The father of our country was, in fact, a moonshiner.

"It turns out that this was one of the largest whiskey distilleries in the country," Dennis Pogue told CBS News correspondent Joie Chen. "It had five stills, [and] produced 11,000 gallons of spirit in one year."

Pogue spent the last decade creating an exact working replica of Washington's still on the very spot where the president built his distillery back in 1797.

To be fair, this was no backwoods operation. Washington's distillery was a big and profitable business.

"This is a hog's head — with boiling water and, you stir it together," Pogue said. "And you mix it."

In its day it was a cutting edge operation. Who knew the first president was an alchemist? Or that he wasn't at all the grim-looking guy you have stuffed in your wallet?

"This was the action hero of the period," Mount Vernon's director Jim Rees said. "He wasn't just the most powerful, he was the most fascinating of all the founding fathers."

Rees wanted the estate's new $60 million exhibition space to offer more than a welcome mat. He wanted visitors to get to know the real George Washington. Many of the folk tales — like how he chopped down the cherry tree and threw a coin across the river — are probably false. Even rumors of wooden teeth are false, Rees said.

"And that's one of the big, bad rumors we fight all the time," he said. "Washington had the Cadillac of dentures, which means they were made from the finest ivory."

Still, they were a miserable fit. The dentures were set in lead. That explains that pained grimace you see in his portraits, and which leave us with no sense of the dashing young man Rees says the president once was.

"We tried to use every bit of science we could to get down to what he really looked like," Rees said.

No portraits were made of Washington while he was a young man. Using super-sleuth technology — the kind you see in a "CSI" investigation — scientists and artists worked together to create a young George Washington: a 6"3', sharply-dressed surveyor of America's new frontiers.

By all accounts, he was an ambitious young adventurer — and maybe a little too bold. Rees said it was Washington who really began the French and Indian War when he was only 23.

Rees describes an eager — even rash — young officer whose ambush of a French commander sparked the war between England and France that would soon spread around the world. In his corner of Pennsylvania at Fort Necessity, Washington was forced to a humiliating surrender.

It was an embarrassing lesson for the commander, but useful later when he became the wary leader of the Revolutionary Forces.

But he was smart when it mattered. Washington was a wily commander and inspired his men in ways other military leaders didn't.

"He could have done what many generals did, which is live in the nearest city in the comfort of a townhouse," Rees said. "He stayed with his men in the camp with Martha. She was with him more than half of the six years of the revolution."

But Rees says the most impressive thing he's learned about Washington happened after the revolution.

"No one had ever led a revolution, knocked out a King and then let the people rule themselves," Rees said. "Until this man came along, everybody else put themselves in the position of a king or a dictator."

After two terms as our first president, Washington returned to his land and to farming.

"Washington was probably the most creative cutting-edge farmer in 18th century America," Rees said. "He did everything, [including] introduce the mule to America, which changed American farming dramatically."

He also preached the wonders of manure. In a way, Washington was the first green president.

"He once compared manure to gold," Rees said. "He thought it was such good fertilizer."

He built a state of the art grist mill near his estate.

"The automated milling system that Washington installed in 1791, he was one of the first in the country to do it," Pogue said. "It became the standard technology. And everybody was doing it within a few years. But Washington was one of the very first."

Back in the distillery where Washington used some of his grain to make whiskey, visitors tested whiskey made using his original recipe — which wasn't exactly top shelf.

But give the man his due. A bit of George Washington's spirit is still with us.