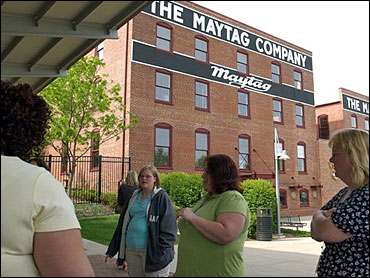 At the dawn of the 20th century, Newton, Iowa was the "Washing Machine Capital of the World." Half a dozen manufacturers were turning out the latest contraptions. But the largest by far was Maytag.

Over the years the competition died away, leaving Maytag to Newton, and Newton to Maytag.

There's a park here that bears the name, and a concert bowl. Signs all over herald the quintessential company town, and the beloved family that helped it thrive.

And thrive it did. With its 30 churches, its cozy downtown, and its Midwestern passion for high school football, Newton is right out of Central Casting: a storybook small town … except for one thing.

If you pass the fields of corn and the neat neighborhoods that border them and head down to the intersection of 19th Avenue and 8th Street, you'll find the Maytag plant. The soon-to-be-closed Maytag plant.

"We looked at every element of the business here in Newton," Whirlpool's Jeff Noel told CBS News correspondent Dean Reynolds. "We did the evaluations that we needed to do, because our commitment is best cost, best quality, best distribution."

"If you look at what the Maytag brand and the Maytag operations could afford for our company, we felt like it was a perfect mix."

That "perfect mix" does not include Newton.

At its peak Maytag employed more than 3,000 people here in Newton. That's more than one out of every five persons in town. But today only a few hundred still work here at the cavernous plant. And by the end of this week, they'll be gone, too.

"I think it is a nightmare," said Mike Duffus, who put in 34 years at the plant. "Most of the people would say that they, if you were to cut them, they would bleed blue - Maytag blue."

Of course, many of us may remember that Maytag blue from those "Lonely Repairman" commercials. However, Maytag was founded long before "Ol' Lonely" made his debut.

In 1893, Frederick Louis Maytag - affectionately known as F.L. to town folks - arrived in Newton from Illinois. He started up a farm equipment company and not long after, began making the product that put Newton on the map.

Town historian Leland Smith worked at Maytag for four decades. Now, he's on the board of the historical society, and knows every inch of its Maytag wing by heart. He showed us a collection of washers and dryers to reflect almost every taste and time, like the first Maytag washer, the "past time washer," made in 1907.

The Maytag family sold the appliance business back in 1962, though they still run the Newton farm that turns out their famous blue cheese. But the company's reputation for dependable appliances endured.

"We made good wages there, but we also made a good product," said Carl Repp, who worked at the plant for 30 years. He remembers when Maytag set the standard. " They call us the dependability people. I mean, that was kind of the motto we went by for many years."

"From the beginning, F.L. Maytag understood that delivering on the promise, putting his mouth where his money was, was really critical and he did that," said Nancy Koehn, a brand historian at Harvard Business School. "There really isn't another appliance that has that special place, that real estate if you will, in customers' hearts and heads like Maytag."

Of course, it wasn't just customers who relied on Maytag dependability. David and Lori Daehler bought their dream home thanks to his job at the plant. He was laid off in last year. Lori had to take up housekeeping to help make ends meet.

"When I started working at the company 15 years ago, it was really hustling and bustling," David Daehler said. "We was working 24/7 at the first plant I worked in. And we couldn't put on enough product. Life was good. Four or five years ago things were really good with the company. And when things started going down, they really spiraled."

"First, it was an excellent company with a good suite of brands," Whirlpool's Noel said. "Now the fundamentals of the company had eroded. They needed to be fixed. They were losing money."

Down at the Midtown Café, waitress Kathleen Tiffany - herself a 30-year Maytag vet - says even before the plant shuts its doors, you can tell the difference. "We used to get all the Maytag office people in here, and now there's no Maytag office."

"Do you think the town will suffer?" Reynolds asked.

"Yeah, I think it will. You can't take the good paying jobs that they had out there and replace them with half the pay. And that's the jobs that we're getting here."

Still, while there is sadness over what the town has lost, you get the sense that Newton is a place with plenty of gumption.

"You know, everyone seems pretty positive, really that they'll move forward and life will go on," David Daehler said, who like a number of former workers, used government grants and job fairs to find new work outside town.

"Hopefully some new opportunities will come and it'll still be a good community," wife Lori added. "Because, you know, we want to stay here and raise our kids."

Maytag's former world headquarters has already been converted into the new home of Iowa Telecom, and a new speedway is providing a boost to the local economy.

Annette West of the Newton Chamber of Commerce, said, "It's not gonna be easy. I don't want to mislead anyone. It will be painful, very painful for some. Somewhat painful for all of us. But we are gonna be fine as a community."

Mayor Chaz Allen agrees. "We were one of the best work forces in the country, if not the world for a period of time," he said. "And we want that title back. These people out there want to produce and make things to the best of their ability."

By the way, though Maytag is gone from Newton, the brand name will live on, even though the machines will be made elsewhere.

And meet Clay Jackson: the "Lonely Repairman" circa 2007. "It's an exciting time for Maytag," Jackson said. "My role in that is to personify dependability and reliability by the way I live my life every single day."

"Dependability" and "reliability" are two understandably ironic words these days around Newton.