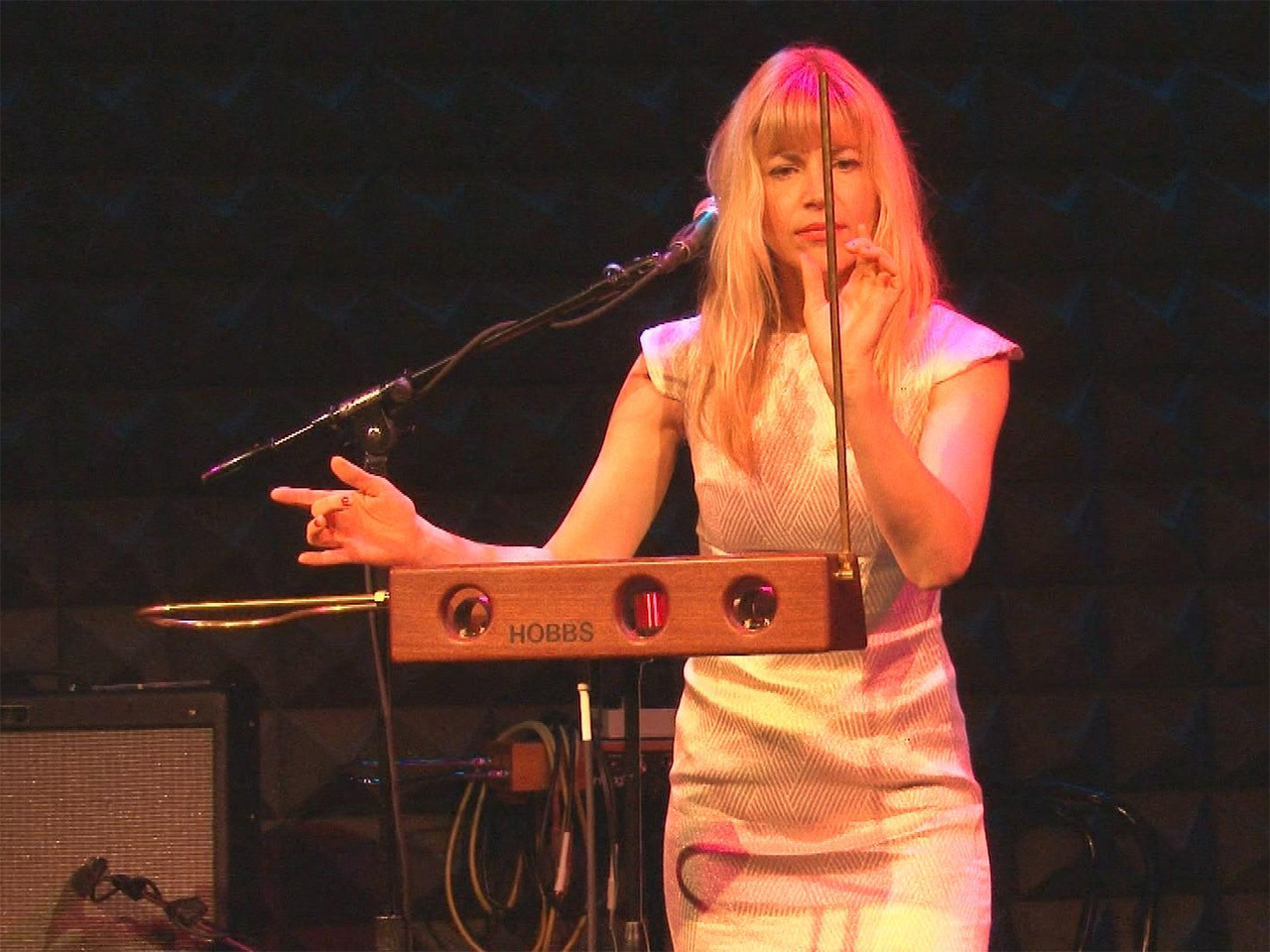 (CBS News) Nothing says Halloween quite like the weird sounds of the Theremin . . . tricky to play, but a treat when done well. With Faith Salie now we'll give it a listen:

It just might be world's strangest, spookiest musical instrument. You can see it . . . you can hear it . . . but you can't touch a Theremin.

"It's like you're fingerpainting in space," says Rob Schwimmer. "Playing Theremin is like having sex with ghosts."

Professional thereminist Schwimmer is a member of the New York Theremin Society, which plays regularly in New York City.

"It's a very hard instrument," Schwimmer said. "There's nothing there to help you. You have no reference. Every other instrument you have something. And so if you're standing in front of the Theremin and your body is a little bit this way or a little bit that way, or if you've put on an eighth of a pound, your field will be different.

"So imagine waking up every morning if you're a violinist, and having the neck be that much shorter or that much longer."

Who would have thought, said music professor and biographer Albert Glinsky, that you could create an instrument that you don't actually touch?

The Theremin is named for its inventor, Leon Theremin. Glinsky says his story is as mysterious as the instrument that bears his name,

"Leon Theremin was a Russian scientist, [and] he was a spy," said Glinsky. "And inventor of what is probably the most unusual musical instrument ever invented. You're actually moving your two hands through two electromagnetic fields that are around two antennas."

In 1919, 23-year-old Leon Theremin invented his namesake by accident.

"And he started to play melodies on this thing. And lab assistants and his boss in the lab started to gather around and said, 'Well, this is amazing.'"

Theremin then devised a freestanding musical instrument based on his discovery, which he sensationally debuted in the United States in 1928.

He performed in major venues like Carnegie Hall and the Metropolitan Opera House.

"Critics really almost didn't know what to make of it," said Glinsky. "There was one who said that if Theremin had lived 500 years ago or something, he would've been burned at the stake as a sorcerer."

Critics also didn't know that Theremin was a KGB spy. His mission: industrial espionage -- which was a key reason why he turned to RCA (back then, a cutting-edge electronics manufacturer) to mass produce his instrument.

But playing the Theremin turned out to be quite a challenge. It remained a musical oddity.

Hollywood to the rescue! Turns out the Theremin's eerie, ethereal sounds were perfect for horror and suspense movies, from the low-budget . . . to the films of Alfred Hitchcock.

On to the 1960s, when bands like Captain Beefheart made the Theremin cool.

Instrumental in this Theremin renaissance was Robert Moog, who got his start selling do-it-yourself Theremin kits from the basement of his Queens, N.Y., home . . . and then went on to make some music history of his own, as the man behind the MOOG Synthesizer.

Stephen Dunnington, an engineer at Moog Music in Ashville, N.C., said Robert Moog was fascinated with the Theremin because, "It can sound vocal, it can sound like a cello, it can sound like a violin in the right hands. So, you know, the musical side of Bob, I think, was captivated by this expressiveness. And the technical side of Bob was captivated by the circuits. It's a really kind of cool design. And then, finally, there's this story behind it, which is the mystery of Leon Theremin."

Though Moog passed away in 2005, you can hear the influence of the Theremin in every synthesizer sold . . . In fact, Moog's company still makes Theremins. They're its best-selling instrument.

"Do you sell thousands and thousands of Theremins?" asked Salie.

"Over the years we have sold thousands and thousands of Theremins, yes," said Dunnington.

"Do you think thousands and thousands of people can play the Theremin well?"

"I know, for a fact, that thousands and thousands of people cannot play the Theremin well!" he laughed. "Although we're approaching hundreds and hundreds of people. Which is awesome."

And what became of Leon Theremin? One day, he vanished -- returned to his homeland , leaving his instrument, and a young wife behind. Years later, after the fall of the Iron Curtain, he and Robert Moog would meet face-to-face, before Theremin's death in 1993.