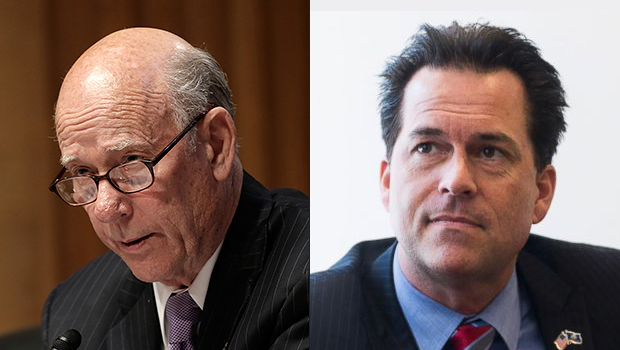 This is not how tea partiers had hoped things would turn out this year.

But in every instance, they've failed - in some cases, miserably. So far, they've lost every one of their intra-party Senate challenges. But the near-toppling of Mississippi Sen. Thad Cochran in June has given the remaining tea party-backed Senate challengers a slim hope for victory. This week's primaries offer the grassroots conservatives a last gasp at ousting some incumbents.

On Tuesday, tea party groups take what may be one of their last chances to defeat a sitting Republican senator, as Sen. Pat Roberts, the incumbent, faces radiologist Milton Wolf.

As with other Republican incumbents this cycle, Roberts remains the favorite but opponents have criticized both his tenure in Washington (he was elected in 1996) and the amount of time they claim he spends there. Roberts hasn't always been his own best defender, accidentally saying he goes home "every time I get an opponent" in an interview this year before catching his mistake and saying, "every time I get a chance."

Wolf's chief claim to fame is that he's a distant cousin to President Obama - a fact he's all too happy to play up on the campaign trail.

"Can you believe that? The next Ted Cruz is Barack Obama's unapologetic conservative cousin," he said at a recent campaign event, according to the Washington Post (the "next Ted Cruz" designation is his own assessment).

But Wolf, like so many GOP challengers who precede him, is an imperfect candidate. Earlier this year the Topeka Capital-Journal reported that he was in the habit of posting X-ray images of his patients' injuries on Facebook along with "macabre jokes and descriptions of carnage."

There is no reliable polling on the race, but the few available surveys show Roberts with a comfortable, double-digit lead.

Kansas has just under 800,000 registered Republicans and is, in statewide and federal elections, among the most Republican states in the country. One recent competitive GOP primary, in 2010 for Senate, saw eventual winner Sen. Jerry Moran prevail in a close race which also divided conservatives, and turnout was less than half that for Republicans, with just over 300,000.

Moran did well in the western part of the state, but that race may not be perfectly analogous to this one as he'd represented the area in Congress. Roberts hasn't had any trouble with conservatives in past elections; he got 88 percent of them in his last re-election in 2008.

In Tennessee, state Rep. Joe Carr has attracted the support of a few conservative celebrities but little in the way of cash. In Thursday's primary, Carr is struggling to overtake Sen. Lamar Alexander, whose internal polling puts him up nearly 30 points. Alexander has also raised nearly $7 million to Carr's $1.4 million.

"The fact that the outside money has stayed on the sidelines tells me that their polls are consistent with what in fact Sen. Alexander's campaign released last week," John Geer, a political science professor at Vanderbilt University, told CBS News.

Geer thinks an Alexander upset in Thursday's primary is an unlikely scenario given how much he has prepared for the race and the attention he's given to the upcoming race.

He "has worked very hard over the last four years to shore up support in all quarters and he did not take anybody for granted," Geer said. "If Lamar Alexander was facing a one-on-one candidacy like a [Texas Sen.] Ted Cruz or [Kentucky Sen.] Rand Paul, someone with a lot of talent, it would be a tough battle."

The third viable candidate in the race is George Flinn, a Memphis radiologist and radio-station chain owner whose own deep pockets have helped him amass a $1.8 million war chest - still nothing compared to Alexander, but more than Carr. Both Flinn and Carr will likely win votes from the more conservative voters in Tennessee, but Geer said they would likely pick up most of their votes from their home areas of the state (Flinn in western Tennessee and Carr in the middle).

Carr gained support from conservative rock stars like former Alaska Gov. Sarah Palin and radio host Laura Ingraham, who has excoriated Alexander for voting in favor of the Senate's comprehensive immigration overhaul that passed last summer. But deep-pocketed outside conservative groups have steered clear of the race entirely.

Though the tea party has failed to pick up any Senate nominations, they were successful in a handful of House races this year. Tuesday, a couple of House primaries could draw national attention too as skirmishes in the broader battle between the tea party and establishment wings of the GOP. These might be characterized as establishment pushback against sitting incumbents.

In Michigan's 3rd Congressional District, which includes Grand Rapids, incumbent Republican Rep. Justin Amash is facing a challenge, but unlike many other primary races this one isn't easily characterized as a challenge "from the right." Rather, Amash's critics say the incumbent is not flexible or compromising enough in his voting record, after Amash had not supported House Speaker John Boehner and House leadership on a number of votes. His opponent Brian Ellis is well-funded and got crucial support from the U.S. Chamber of Commerce. The district is rather reliably if not overwhelmingly Republican, mostly due to its conservative-leaning suburbs, which is where this primary is likely to be decided.

In Michigan's 11th outside Detroit, incumbent Kerry Bentivolio is also facing a well-funded challenger endorsed by the Chamber.