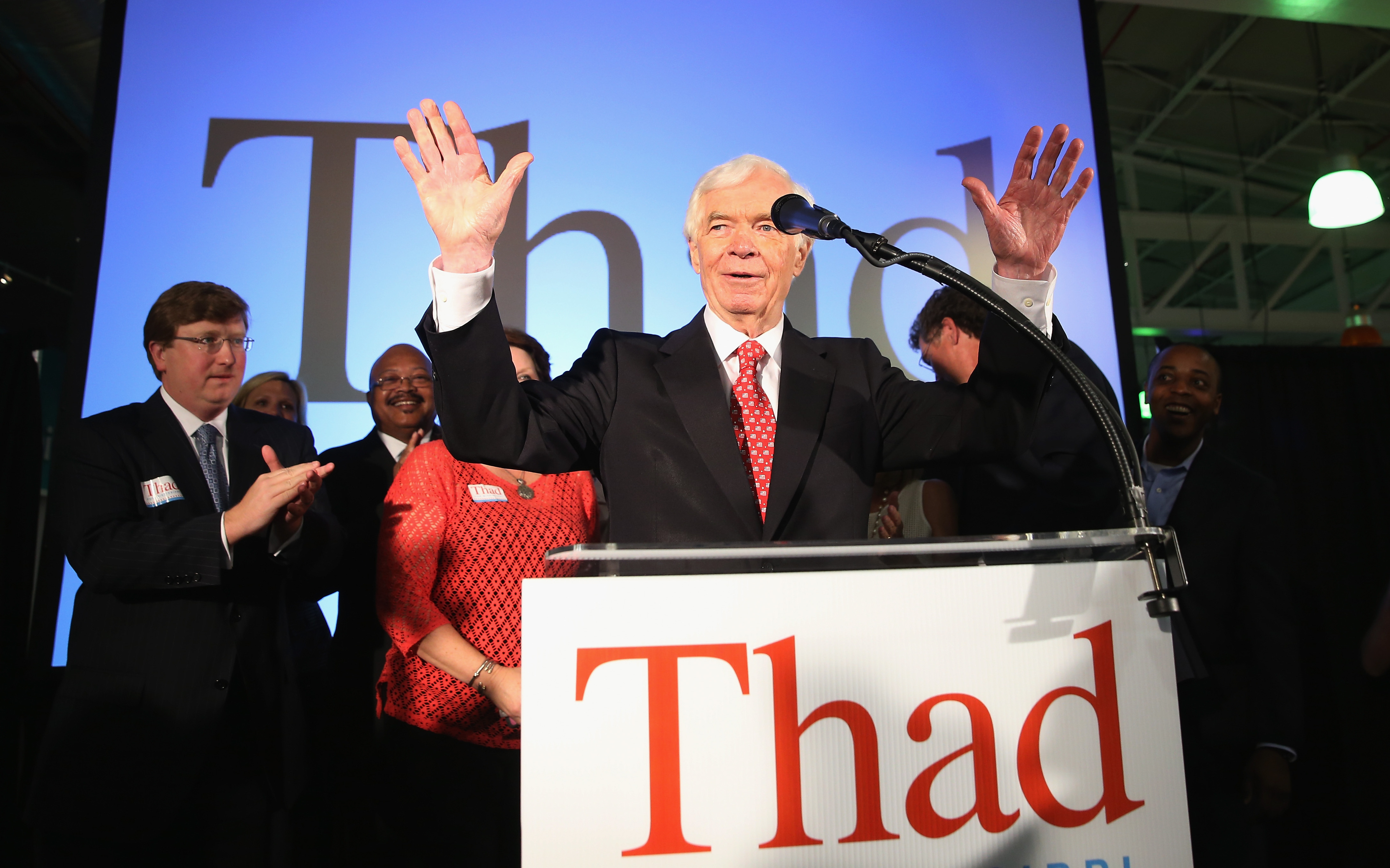 Go ahead and toss Mississippi Sen. Thad Cochran's political obituary in the garbage.

Returns showed Cochran with a lead of about 6,625 votes, holding 51 percent of the vote to McDaniel's 49 percent with 99 percent of precincts reporting.

There were cheers when the race was called and shown on TV, along with chants of "Thad, Thad, Thad," CBS News Radio correspondent Peter King reported from Cochran headquarters in Jackson, Miss.

"You helped reach all the voters, to make sure they knew they were important to this election because it's a group effort, it's not a solo," Cochran told his supporters during a brief victory speech before thanking them.

Declaring Mississippians "are not prone to surrender," McDaniel didn't concede in his post-vote count remarks, choosing instead to hint that the vote was perhaps tainted by crossover Democrats and he questioned the "sanctity of the vote."

"We have to be absolutely certain that the Republican primary was won by Republican voters," McDaniel said.

McDaniel didn't explain how he would achieve that certainty, and since Mississippi doesn't have a recount law on the books, it's unclear what McDaniel will do next.

McDaniel's complaint about vote "sanctity" is a reaction to a late effort by Cochran to reach out beyond Republican voters, including black and union Democrats.

Mississippi law allowed anyone who did not cast a Democratic ballot on June 3 to cast a Republican runoff ballot, the Associated Press reports. McDaniel and his supporters previously cited a defunct Mississippi law - effectively invalidated by the courts - that requires primary voters to support a party's nominee in November. That would bar Democrats from supporting Cochran, the McDaniel camp argued. Mississippi elections officials confirmed before polls opened that the law is functionally unenforceable, according to the AP.

Cochran's comeback caps off a grueling primary with over $11 million being dumped into the campaign from outside groups, half of which was spent to defeat the incumbent.

Both candidates boosted turnout in their key areas, the places where they had done well in the first primary - but for Cochran that boost was just a little more, as he performed just a bit better than last time around the Mississippi Delta and the state capital, Jackson.

Cochran and McDaniel are both conservatives by just about any objective measure, but the race served as a proxy fight between tea party-aligned, anti-establishment conservatives and traditional conservatives.

After six terms in the Senate, the 76-year-old Cochran really had no choice but to embrace his reputation as an establishment Republican -- and to remind voters that his seniority helps channel needed resources to Mississippi, especially along the Gulf Coast in the wake of Hurricane Katrina. He benefited from heavy financial backing from traditional Republican groups like the Chamber of Commerce as well as high-profile endorsements from prominent Mississippians.

For the 41-year-old McDaniel, his tea party-oriented campaign elicited more national focus, an opposition to federal spending more generally, and is as much about Washington as as about Cochran. He garnered support from high-profile conservatives like former Alaska Gov. Sarah Palin and former Sen. Rick Santorum.

Over the past three weeks, third parties backing both Cochran and McDaniel continued to pour money into the race, while even some Democrats became involved to support Cochran. The senator said he was happy to accept support from Mississippi's Democratic voters, who were free to vote in the runoff as long as they did not vote in the June 3 Democratic primary.

Cochran now can focus on the general election where he'll run against former Democratic Rep. Travis Childers in what's expected to be an easier road than the extended path to the GOP nomination.