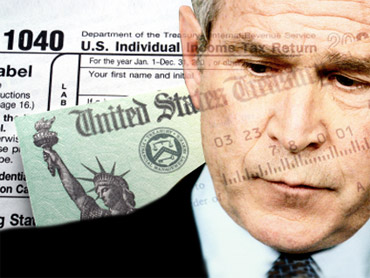 Ever since the colonists dumped tea into Boston Harbor, Americans have been fighting over taxes. So the battle going on right now over extending the Bush tax cuts is in keeping with proud tradition. CBS Evening News anchor Katie Couric puts it all In Focus.

"If the two certainties in life are death and taxes," CBS News Political Analyst John Dickerson says, "It is also a certainty that every president is going to have a big fight over tax cuts during their administration."

In 1981, President Ronald Reagan cut tax rates by a whopping 23 percent at a cost to the government of over $750 billion.

"Ronald Reagan started with a boom - a tax cut for everyone," Dickerson says. "But then over the course of his two terms he raised taxes more times than he cut them."

"Bush had to go back on that pledge, he had to raise taxes," Dickerson explains. "That hurt him with republicans which went on to hurt him in the general election."

When Bill Clinton took office in 1993 he faced a $300 billion deficit. He cut government spending by $247 billion and raised taxes on top earners. That move, and later tax cuts, resulted in a budget surplus in 1998.

In 2000 there was still a $230 billion surplus. George W. Bush campaigned on giving some of that money back to the people.

"The younger Bush went around telling people, 'Look, I'm more like Ronald Reagan than my father,'" CBS News senior White House correspondent Bill Plante says. "And at the time the budget was in surplus, so the tax cut didn't seem like such a bad idea."

At his address to the joint session of Congress in February 2001, President Bush said, "The people of America have been overcharged, and, on their behalf, I'm here asking for a refund."

With some arguing the cuts favored the rich.

"There were about a dozen Democrats, who in the end, voted for the president's tax cut plan," Nolen says. "There was a lot of pressure."

In a rare Memorial Day session in 2001, the Senate passed Bush's $1.3 trillion tax-cut plan: lowering tax rates 3 to 5 percent in all income brackets, phasing out the estate tax, reducing the marriage penalty and doubling the per-child credit to $1,000.

The end result was bipartisan, but Democratic support came with one condition - that they expire in 10 years.

Calls for more cuts followed in 2003. Bush proposed reducing taxes on capital gains and dividends. But these were costlier times.

"By 2003, we were fighting two wars in Iraq and Afghanistan, spending was on the rise, and even some Republicans opposed this round of tax cuts," CBS News senior business correspondent Anthony Mason explains.

On May 23, 2003 Vice President Dick Cheney cast the deciding vote - breaking a 50-50 tie, pushing forward a second round of cuts with the provision that they too expire at the end of 2010.

The Bush Tax Cuts: What Now?

"When Obama first came to office, he did not understand. Nobody understood how bad things were," CBS News chief White House correspondent Chip Reid says.

At the 2010 State of the Union address, President Obama said, "By the time I took office, we had a one-year deficit of over $1 trillion and projected deficits of $8 trillion over the next decade."

While those annual deficits added up to a now skyrocketing $14 trillion debt, the economic climate got even worse. The administration believed a devastating recession and high unemployment demanded immediate attention.

"So what the president decided right up front was that the No 1 priority was to stimulate growth quickly," Reid says.

"The stimulus package was supposed to lead us to a robust recovery -- that hasn't happened," Mason adds. "The issue here is, if you don't extend the tax cuts will that damage the hope of the recovery strengthening."

Most agree tax cuts will remain for the middle class. At issue is whether those cuts will stay put for higher earners. If they expire, couples making between $200-500,000 a year can expect to pay over $8,000 more in taxes annually.

If cuts expire for the top 2 percent of earners, $700 billion will be added to government coffers, helping to ease the debt.

If all the cuts stay in place, the deficit will soar by $3.7 trillion dollars over 10 years.

"This election has just changed the political calculation here," Reid says. "It's probably going to be impossible for the president to get his way."

Is compromise a possibility? It depends on who you ask.

"There must be some sensible, common ground," Mr. Obama said this week.

House GOP leader John Boehner said, "We're looking forward to the conversation with the White House over extending all the current rates, and I remain optimistic."

More Bush Tax Cut Reporting from Moneywatch.com and Bnet.com
How Much the Tax Cuts Will Save You
Are You Middle Class?
Did the Bush Tax Cuts Lead to Economic Growth?