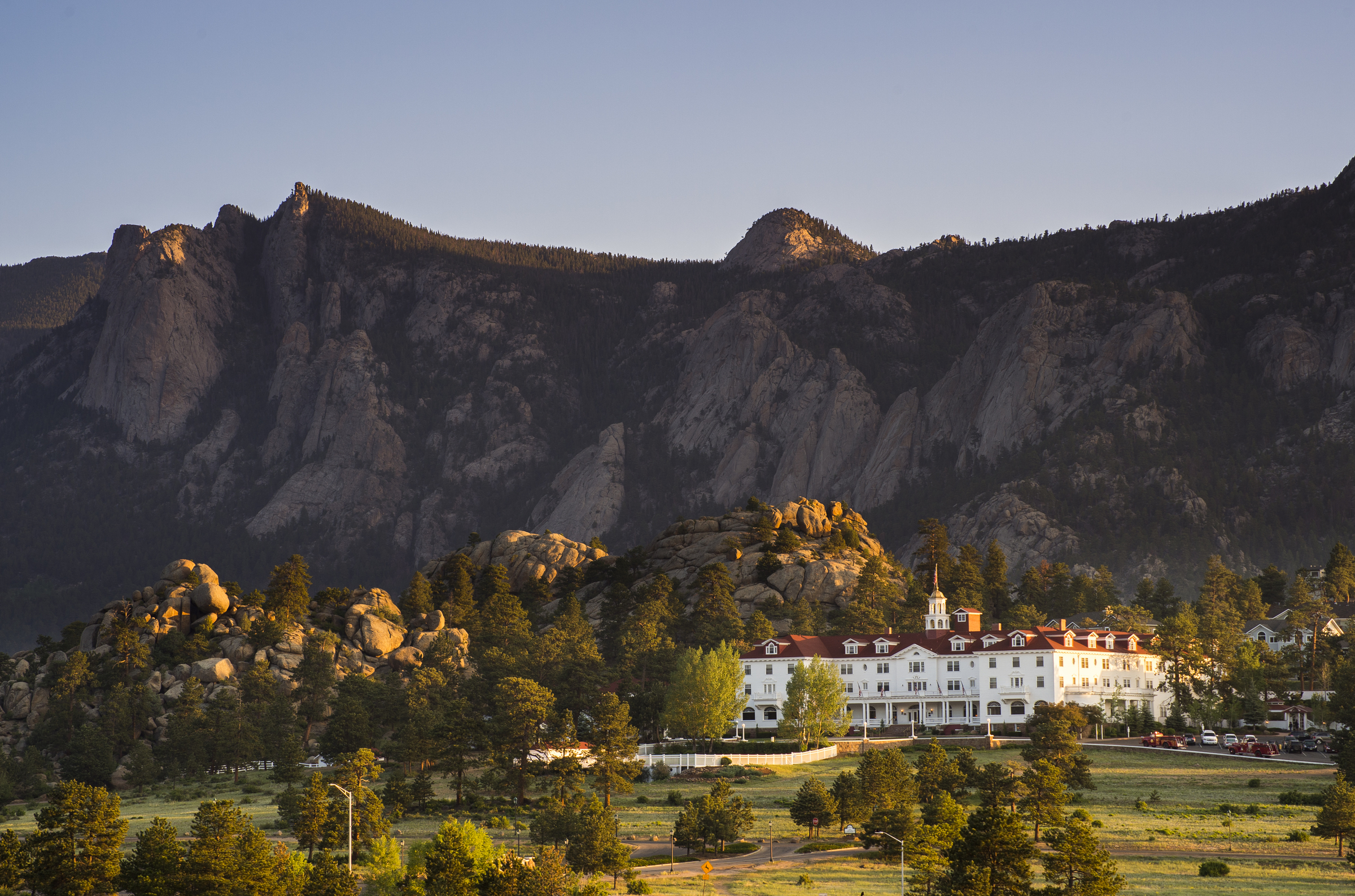 It begins innocently enough: A frustrated writer takes his loving family to an isolated hotel, and despite its violent past, agrees to look after it for an entire winter. Then, things get a little out of control.

The story of the Torrence family and the Overlook Hotel is one of the most well-known in horror. While the "The Shining" is a work of fiction, it was inspired by a very real 105-year-old piece of history that is still open today.

Welcome to the Stanley Hotel, set on 160 acres of pristine Colorado land along the dramatic backdrop of the Rocky Mountains.

This majestic Georgian complex (founded in 1909 by F.O. Stanley, creator of the Stanley Steamer automobile) impressed the wealthiest of the wealthy.

Its early residents included John Philip Sousa, Theodore Roosevelt and the Emperor and Empress of Japan.

But reports of strange occurrences at the Stanley can be traced back almost as far as the hotel itself. In fact, Stephen King and his wife spent a night at the historic hotel in 1974 after hearing rumors it was haunted.

"This is where Stephen King got the inspiration for 'The Shining,'" said operations manager Anil Singh about the author's 1977 novel.

According to the staff, the Kings arrived a day before the hotel was set to close for winter, and that night, they were its only guests. King wandered the maze-like hallways, drank at the bar and stayed in room 217 (Kubrick changed the room number to 237 for the film).

Now, 37 years after the publishing of that book, the Stanley fully embraces its "Shining" reputation.

The 160 guest rooms come equipped with an uncut version of Stanley Kubrick's 1980 big-screen adaptation of "The Shining" on continuous loop on channel 42. And guests can upgrade to the "Ghost Adventure Package," which comes with a K2 meter and a REDRUM mug (ax, typewriter and hallucinations sold separately).

But the hotel's biggest draw are its daily tours.

Tour manager Walter Oglesby offers four different types of historical and haunted tours throughout the year -- they gave 81,000 in 2012.

One of the ghost stories guides always tell takes place in room 217. It's said to be haunted by Elisabeth Wilson, the hotel's chief housekeeper in its early days.

According to Oglesby, she walked into room 217 on June 25, 1911 and, not realizing there was a gas leak, lit a candle, which resulted in a gigantic explosion and the loss of 10 percent of the hotel.

Somehow Wilson survived the blast and continued to serve the hotel until 1950. Although she is long gone, many guests believe her spirit remains in that room.

"She had such a strong emotional connection to the room; people still think she's there today," Oglesby said. "If you leave your luggage in the room, you might find that it's been folded when you get back. One person woke up and found someone made their bed around them while they were sleeping."

Oglesby says F.O. Stanley and Flora Stanley still haunt the hotel's lobby, and guests often report hearing piano music though no one is playing (Flora was a gifted pianist).

Another "active" area of the hotel, he says, is the fourth floor.

"Originally when the hotel opened, it was used for childcare, to house children and nannies" Oglesby said. "Ever since then, people will say they hear kids running around the hallways."

Remind you of a pair of twins, perhaps?

For amateur ghost hunters, there are actual paranormal investigations offered five times a month, which typically sell out weeks in advance.

The investigations take place for five hours -- from 9 p.m. until 2 p.m. -- with a maximum group of 20 people. They spend most of their time investigating the concert hall, "one of our most active rooms," Oglesby says.

"We've gotten a lot of EVP [Electronic Voice Phenomenon] recordings," he added. "People have seen things or had things move in the room on occasion. People will occasionally say they see things or hear someone."

Skeptics abound, but Oglesby stands by his experiences.

"I didn't believe in paranormal before I started, but I believe it now," he said.

Many guests "believe it now" too.

"About one out of four guests say they've felt something or experienced something, based on what they tell the front desk when they check out," Singh said. "If you don't believe it you don't see it, but yes, one out of four."

Though the Stanley is often referred to as "The Hotel from the Shining," this is a misnomer; Kubrick actually used exteriors from a different hotel for the film starring Jack Nicholson and Shelley Duval.

"The one thing people notice is we have a much lighter coloring than you'd expect," Oglesby said. "Also, a lot of people think we're more isolated than we are."

The hotel is actually just outside downtown Estes Park, a popular vacation site located an hour away from Denver.

But one thing is certain: Without this historic hotel, we probably would have never had "The Shining." And the Stanley's reputation is only growing; it's becoming a cultural hub for horror movie lovers everywhere.

From April 30-May 3, 2015, the hotel will host its third annual Stanley Film Festival. It showcases four days worth of horror films from across the globe, student films and shorts.

"It's considered the Sundance of horror movies," Singh said.

Last year, Elijah Wood was the guest of honor, attending all four days and winning the festival's Visionary award. Eli Roth was awarded the honor the year before.

As you might expect, Halloween is an exciting time at The Stanley.

This Saturday (Oct. 25) is the night of the annual Shining Ball, a costumed dance expecting a 270-person turnout.

"We're recreating the ball from 'The Shining.' It's probably going to be one of the biggest parties we've had," said Oglesby.

Singh added, "People come in from the town just to see the amazing costumes."

There's also a murder mystery dinner on Friday (Oct. 24), and a masquerade party Halloween night; the big send-off to the Halloween season.

"We're expecting about 800 guests for that," Singh said.

While the rooms and events are already sold out for Halloween, at the Stanley, Halloween is truly year-round.

So if you're a horror fan, or just feeling like life has been "all work and no play" lately, it may be time to book a visit...if you dare.